Continuing with the critiques I started in 2015, here is the next in series – a book review.
Prologue: Go here.
For review of all books under Murder, She Wrote series: Go here

Murder, She Wrote: Three Strikes And You're Dead is the 26th installment of the book in this series whose books were based off of the famed Universal Television Murder, She Wrote. Written by Jessica Fletcher and Donald Bain, the books was published in October of 2006. The plot is based in and around baseball - the game that I understand very less. A great timing for me to complete this book though. I was visiting my family in CA that week (the day this post originally was supposed to be written, I am seriously behind! :P) and I got a crash course on baseball with this book so I could understand and enjoy my nephew's t-ball games. :P 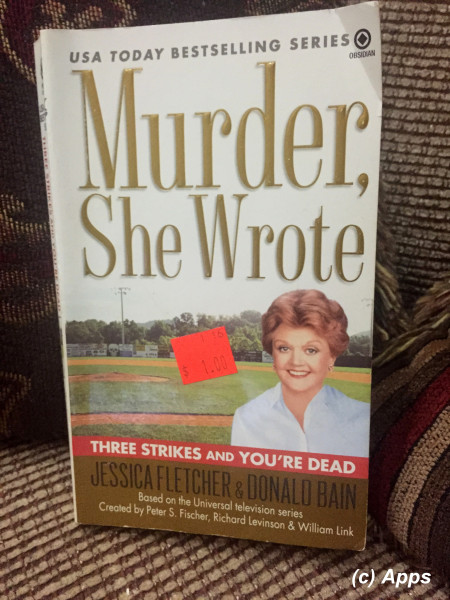 Jessica Fletcher is in Arizona visiting her old school friend, Meg Duffy and her husband, Judge Jack Duffy. Jack had presided as a judge in the Family Division of the Superior Court, Hudson County, New Jersey. Ty Ramos was the foster son of the Duffy's who was playing for The Rattlers - minor league baseball team and a Double-A team in the Pacific West division. Ty hits the winning run and gets a huge win for The Rattlers. However, the team owner Harrison Bennett (H. B.) is not thrilled as his decision was over-written by the coach and Ty had taken the winning run rather than H. B.'s son Junior Bennett. There is a rivalry between Junior and Ty whose flames are being encouraged by H. B. much to the disappointment of the Duffy's.

During the after game winning party, Ty and Junior get into a fight outside the bar and Ty leaves him there lying on the floor. However shortly after Junior is found dead his head bashed in my by a baseball bat. And Ty is the prime suspect as he had been the last one seen with Junior per the witnesses. To hurt it further, the baseball used to kill Junior was a something Ty had used it as a kid. And his tough childhood was not helping either. He was being convicted by media even before the case was investigated. Duffy's had taken Ty from a rough neighborhood and with all of their hard work they finally became a family. And now this murder is casting a shadow over him. Jessica doesn’t believe that Ty had anything to do with the murder despite what the circumstances speak for. She along with Sherriff Hualga dig deep and investigate to get Ty exonerated and also find the real killer.

The plot is complicated and just perfect like any other Murder, She Wrote TV series. It was fun to learn so many baseball terms, get first-hand read on the various politics around any game as such and the intricacies involved. It did keep me on the edge and I could not guess the killer until it was revealed. That is new for me for this series. All in all a good murder mystery, light on mind and easy on heart.

I remember an episode based on baseball produced for the Murder, She wrote TV series that had a similar title. The TV episode however was called "Three Strikes, You're Out" which was aired on May 7 1989 as Season 5 Episode 20. There are certain differences between the two (the TV episode and the book) but both plots revolve around baseball. I wonder if Donald Bain's book is inspired from the TV episode. Click here to watch the episode.
Tags: books, critique by amateur, murder she wrote, reviews
Subscribe