The Case of the Fiery Fingers in the 37th Perry Mason case written by Erle Stanley Gardner and published originally in May of 1951. A seemingly simple advice counsel turns to a full-blown murder case with elements of fraudulence and conspiracy. 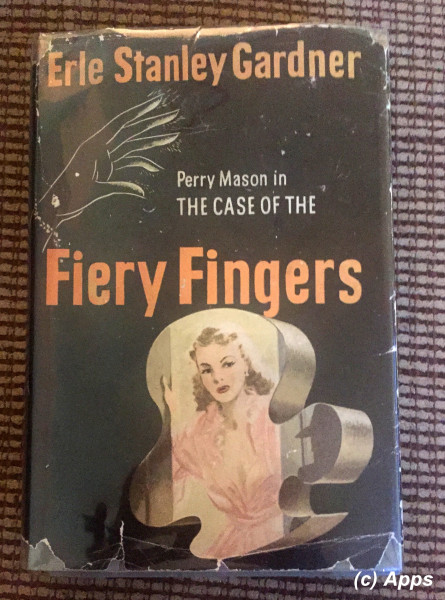 Nellie Conway, mousy night nurse-maid comes to Perry Mason's office for an advice on what her employer want her to do. She pays $1 for that. The case in point being Nellie claims that her employer Nathan Bain has asked her to give some poisoned pills to his wife, Elizabeth Bain whom she was taking care of during the nights. Elizabeth had broken her back in a car accident and had been confined to her bed and her room. Nellie was the night-nurse while there was another one for day. Nellie had approached the cops about what Nathan had asked her to do but they dismissed her suspicions claiming that the pills were nothing but asprin. After listening to her case, Mason takes one pill and gives back three pills sealed in an envelope asking her not to use them at all. She leaves unsatisfied with the advice and Mason is left feeling that he had just been dragged into middle of something that was going to turn bigger.

True to his feeling, Nellie calls Mason the following evening claiming that Nathan Bain is getting her arrested for thievery. That Nathan has proof that she has stolen one of the pieces from his wife's jewelry box. Naturally Mason takes up the case to defend her. However, his dealings with Nellie and Nathan doesn’t end there. And that leads to murder, investigation and defending again another person. As much as Mason gets irritated by the mess in the first-place, again with his trusted associates Della Street and Paul Drake he not only unravels the mystery but also solves the murder much to the frustration of DA Hamilton Burger.

Another charming and quite an interesting court-room drama between Mason and Burger written oh ever so mysteriously by Gardner. I have watched the entire series and the movies but hadnt read a book till now. It is no wonder Gardner is so good that the book comes alive even if you hadnt watched the series. And yes, it is not until the last chapter that we get to know who the murderer or culprit is. I could never guess in any of his plots. Always complicated plots and ever feeding your curious mind. And don’t forget the language used. It is so different from modern books like - Mason quipping angrily of course "by making a goat out of me" or the words "temerity", "monkeyed". I am looking forward to read the rest of the books when I get a chance.

If you want to get defended anytime, it would better to have Perry Mason on your side. Jokes apart, a very good book to read to satisfy your noodles.

Here is the episode in the TV Series made based off of this book.