Stars: 2.5 / 5
Recommendation: An easy mystery read that is weaved through the world of fashion, style and dressing from the view point of a fashion stylist.

Veiled Revenge is the ninth installment in the Crime of Fashion Mystery Series by Ellen Byerrum published in February of 2013. Lacey Smithsonian, the fashion reporter for The Eye Street Observer in Washington D.C., gets tangled with another fashion murder while preparing for her best friend Stella Lake's - manager of Stylettos Salon - wedding. 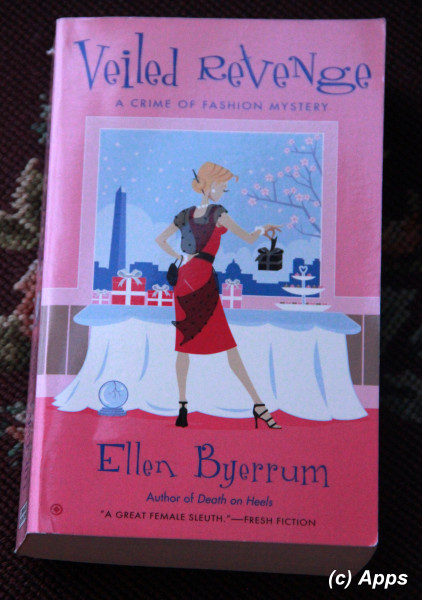 At the seemingly happy wedding shower for Stella Lake, the resident fortune-teller Marie Largesse cautions everyone to not to mock her shawl - supposedly given by her Gregor Kepelov, an ex-KGB - as she believes that it comes with some powers and if you mock you may lose our way, your money or your life. Despite the chills it gives everyone Marie allows Stella to try the shawl on. With her wedding a week away Stella had become more and more superstitious - adding cause for pain to the maid of honor, Lacey herself. Stella was all set to marry Nigel Griffin though - even if there is a dead body found from now till next week.

The story goes that the shawl was Maries was sporting at the party wasin the Kepelov family for generations originally came from one of their ancestors named Irina Katya Kepelova. Each and every Kepelova woman had contributed in the making the shawl and adding the story to the shawl as generations passed. Their blood, tears and perhaps a piece of their soul is trapped in the shawl - and hence considered haunted or cursed, whatever way one sees it. A nice story but a chilling past. Stella's nemesis Leonardo I-am-too-cool-to-have-last-name - the hairstylist who had left Stylettos in bitter terms - crashes the party and mocks the shawl while playing with it despite the efforts of everyone to remove it from his clutches. Suddenly Leonardo throws the shawl away complaining that it bit his neck. And Marie faints. When Marie faints it is never good as it always follows with something really dreadful.

True to everyone's superstitious thoughts, come Monday morning, to their shock, they find that Leonardo is dead. Stella, Miquel and Brooke Barton - Esquire, lawyer by day and wacky conspiracy theorist by night - all think that since Leo mocked the Shawl the previous night at the party, the shawl now killed him. Although they ask her to use her extra-fashionary perception and investigate, Lacey shuns them off saying its just a coincidence. But, is it? Is the shawl really cursed?  Lacey also has all of her news reporter colleagues to fight with to get the exclusive on Leonardo's murder - Harlan Wiedemeyer (The Eye's death-and-disemberment reporter) and Trujillo (The Eye's police reporter) - and Damon - mad genius behind the popular Conspirancy Clearance Website also knows as Deadfed dot com - Brooke's boy friend. Yet, Lacey just moves on to the idea of "if clothing can be haunted" and work for her fashion bites. Can clothes have powers? Can they have bad karma? However, for Lacey they have magic just like her Aunt Mimi's trunk which was a treasure trove of styles of the late 1930s and 1940s full of enchanting material, style, design and made to fit a real woman. For Lacey this was magic.

Lacey is also working, although grudgingly, on the "true crime" book based on what happened in Sagebrush for their paper (<add link to review of that novel - Tucker's case I believe>) along-side Tony and Mac Jones - The Eye Street Observer's Editor. She is overwhelmed with the wedding planning for Stella and to top it all its Spring in Washington D.C. And she want to be out here in the middle of it rather than between this chaos. Now her mind is all crowded with Maries fainting spell, the supposedly haunted / cursed shawl and the untimely death of Leonardo. So what does Lacey do? Naah not investigate but hand it over to her rival reporter, Tony, hoping that she isnt pulled or pushed into the mix again. But eventually she gets in the middle of it again.

Leonardo died of poison. Who could have poisoned him or how? Everyone at the party at the same food and drinks but no one else died. What is the reason for the bitterness between Miguel Flores and Leonardo? Could there be more to this rivalry? What exactly is the shawl supposed to have done / harmed someone? Is there any truth to the history behind the shawl? And now the shawl has gone missing. The mystery gets more mysterious and haunting as it proceeds. The line of suspects is not short at all - Bryan Culpeper - the obnoxious British friend of Nigel Griffin and his best man; Rosalie - annoying cousin of Stella; Gregor Kepelov - Ex-KGB and Marie's boyfriend; Olga Kepelova - sister of Gregor Kepelov; Kevin Early - Leonardo's room-mate; Rene Thibodeaux - childhood friend of Turtledove, in D.C. from New Orleans looking for his girlfriend Leah. Who is trying to kill them? And why? What are Olga and Gregor not telling? Someone messed with Vic's brakes? Why is Vic being targeted? What is Rene doing here in D.C.? Is his reason really valid? Stella's mother Retta Lake is creating all kind of nightmares for Stella that is adding to her apprehension to get married. This time Lacey certainly managed to be in a really thick layer of shawl, shall we say. :)

Another interesting murder mystery involving fashion, style and legends. Ellen Byerrum did her best in this again although I did feel at time the text was too much. It took almost half the book for Lacey to actually start investigating all the while denying it or ignoring the pleas from her friends. It was getting a tad bit tiring to hear her keep on saying "I am not investigating that murder" - although not in the same words. But I also feel sorry for her since she gets forced into investigating it because of Stella. And Stella's temper-tantrums of getting married and not getting married was too much to take. Oh boy wish I could conk her head with a pan and get some sense into her head. However, who know why brides behave like that, not being experienced myself, cant comment much other than get irritated.  I wish the story could have speeded up a bit even though the plot is really good. That alone was the saving grace for me to continue reading. However, if you want to read it, you can skip a few chapters and still finish the book with knowing what is going on. A good one for those quick cursory read books that you might be looking for. Anyways signing off with another of Lacey's fashion bites.

Lacey Smithsonian's Fashion Bites: The Magical Properties of Clothes
Our clothes help us create our own aura, our own style, our own magic. Some days our clothes just do their jobs and we do ours, no magic involved. But think about this the next time you're dressing for a big event, a first date, a special party, a wedding: Is the magic in the clothes we wear, or is the magic in us? And does that magic linger in what we wear, even after we've put the clothes aside?

Spoiler Alerts:
a) The plot talks about the move The Philadelphia Story and it peeked my interest enough to watch. Review coming up soon.
b) The dress that Lacey wears for the bachelorette party is mentioned as pale-yellow 1930s garden party dress. Intrigued me enough to check it out. Here is one that I found very cute…wish it had a full view.
c) Lacey has a secret with regards to her relationship with Vic Donovan - her boyfriend. Is she going to be engaged? Will she finally accept Vic's proposal?
d) There are quite few references to previous books in the series in this book. Makes one wonder if this would be the last in the series. But I do know there is another book after this which I am yet to read.
e) I do want to check out the restaurant Co Co. Sala in Washington, D.C. that is mentioned quite a few times in the book. Looks interesting. Check it out here.
Tags: books, crime of fashion, critique by amateur, murder, mystery, reviews
Subscribe