Stars: 4 / 5
My Recommendation: If you wonder what happens to the characters after their happily ever after, then this is definitely a show to watch that shows "what-after" of two famed Jane Austen's characters

Death Comes to Pemberley is a three-part British TV Series broadcasted in December of 2013. It is based off of P. D. James novel of the same name published in 2011. The book starts 6 years after Elizabeth Bennett and Mr. Fitzwilliam Darcy get married in Pride and Prejudice. The basic plot revolves around the Darcies and the Bennetts and involves murder. 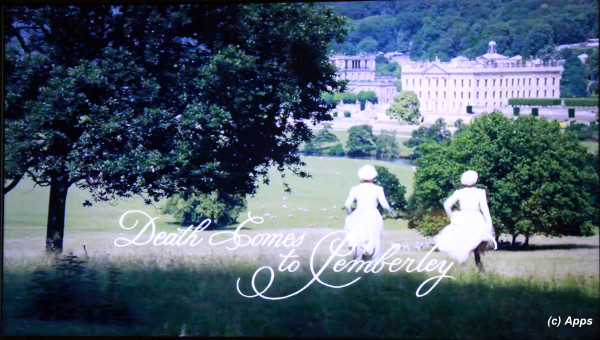 Six years after their marriage, Elizabeth and Fitzwilliam Darcy are preparing for a ball. They have a five year old son. As usual the relative parties are invited and start arriving. Although uninvited Lydia Wickham - Elizabeth's sister - and her husband George Wickham - always a pain for Fitzwilliam with all his mis-workings - along with their friend Captain Denny travel to the Darcy home for the ball. Mid-way Captain Denny gets angry with George and jumps off the carriage and starts to walk off into the forest. George follows him shouting and shortly after a gunshot is heard. Spooked the carriage man takes Lydia to the Darcy. Darcy enlists the help of his guests a search party only to find George huddled with a very-dead Captain Denny and screaming that it was his fault. The story continues with finding out the reasons behind the argument, who killed Captain Denny and why was he killed.

Although it’s a dark plot, it was delightful to see the characters from Pride and Prejudice come alive again. Fitzwilliam as charming as always, Elizabeth the most gracious and of course the snippy Lydia constantly wanting to be the center of attraction and finally George, always the bad apple and rotten more and more as the days go by. Who can forget Georgiana - Fitzwilliam's sister - who had gone through a pain from her childish love failure but matured to a beautiful woman. Thoroughly enjoyed watching the series and the plot unfold. It was amusing to see George try to best Fitzwilliam as usual but to his loss.

Since watching the TV Series, I bought the book but hadn't had a chance to read it yet. However, I would recommend you, my wise readers, watch the series. It's on Netflix. And hope you enjoy it as much as I have enjoyed.
Tags: critique by amateur, reviews, tv shows
Subscribe