Spirit Bound is the second installment in the Sisters of the Heart / Sea Haven Series published in December of 2011. The plot is surrounding Judith Henderson, the second sister of this small family of sisters formed by heart - has the ability to control the element of Spirit and famed for her kaleidoscopes and restoring old art work - and Stefan Prakenskii, the third Prakenskii brother - ability to read auras, telepathic and also trained to be a killer like his other brothers among other abilities. 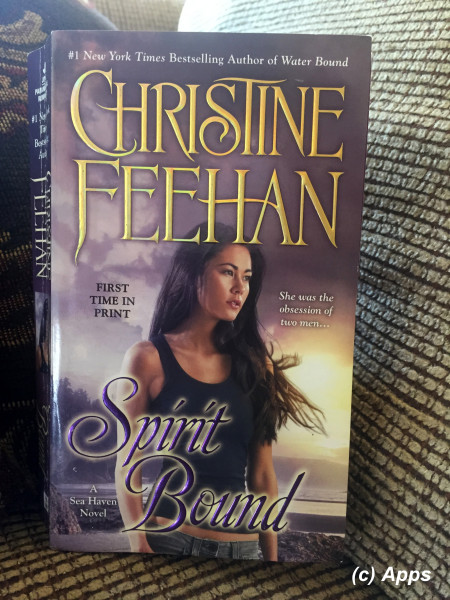 Stefan Prakenskii after helping his brother, Gavriil escape Russia, picks up where he had left off in finding who had sold out their country which led him to Jean-Claude La Roux. The last link in the line of people responsible for hurting and destroying Gavriil's career is Jean-Claude. Now Stefan is sharing a cell with him in the prison in Paris waiting for an opportunity to finish him off.

Jean-Claude is the head of a vast criminal empire with unbelievable wealth and hoards of connections. He is obsessed with his former lover (at least in his mind) - Judith Henderson and has posted all his walls with photos of her in various places, situations and angles. He had put a surveillance around her. Stefan feels a connection to her the moment he sees her picture. And to his delight or frustration, his handler is sending him to Safe Haven to establish a relationship with Judith ahead of time before Jean-Claude escapes from the prison and reaches her.

Stefan is stunned that Sea Haven has again come into his family where his youngest brother Ilya Prakenskii is settled, married to the famous singer Joley Drake and his other younger brother Lev Prakenskii disappeared there presumed dead. He wanted to go and find the truth about Lev, and also figure out the strong feeling he had towards Judith. He accepts the mission, however reluctantly and with high suspicion, to save Judith from Jean-Claude's clutches - unbeknownst to the fact that she is the one who will infact save him from losing himself.

Judith Henderson is settled well with her sisters in Sea Haven and with her art work and kaleidoscopes. She has her dark secrets that she keeps from her sisters and locked inside. She also has powers that she is afraid of being not in control and might harm everyone around her including her sisters. Yet, she works to survive and make a life for herself. Now two men are fixated on her, one she knows and fears and the other she is coming to like and afraid he might steal her from herself.

What is the dark secret of Judith that ties all the major players together? What will happen if she unleashes all her rage and power? How is Stefan tied to her? Will Stefan find Levi and save him from the cleaner? Which means will the cleaner also be after Stefan? How much will Jean-Claude achieve in capturing Judith back? Will all his money and power aid him or destroy him? Why is the government now after all the best agents that it had created only to destroy them?

Christine Feehan as always spun the plot melding the secret world of art and smuggling, powers of magic and conspiracy of murders with love, romance and sexual elements. She has cleverly put two characters Thomas Vincent (Stefan's undercover) and Stefan Prakenskii at each other's wit and played them well. See who comes out on the top. Now the series is beginning to get more and more interesting. Am glad I continued to read the series. Go ahead and pick it up and you will not regret it.

Spoiler Alerts:
a) Gavriil Prakenskii, the second Prakenskii brother is mentioned again in this book who is forced to go into hiding after being gravely injured with a permanent injury while saving a Russian scientist, Theodotus Solovyoy (a contemporary of Damon Wilder, husband to Sarah Drake - oldest Drake Sister).
b) I am still waiting for Elle Drake and Jackson Deveau to come back from their extended honeymoon to see what they will do about Lev Prakenskii settling in Sea Haven - since he was connected with the Stavros Grastsos and although saved Elle Drake, Jackson might not see that way.
c) Stefan talks about their oldest brother in this book, although no name is given. And Blythe remembers being in a similar ceremony as that she is being now while Stefan and Judith are marrying. A definite connection between these two snippets - will have to wait and see how they turn out in future books.
Tags: books, critique by amateur, reviews, sisters of the heart
Subscribe