Continuing with the critiques I started in 2015, here is the next in series – a book review.
Prologue: Go here.
For review on Drake Sisters Novels: Go here.

Stars: 3.5 / 5
Recommendation: Yes, if you want to continue with the Sea Haven novels, believe in siblings made even though not related by blood, believe in second chances and true love.

I had posted review of this book originally in 2013 of December (my review with two stars, read here) when I had first read it. However, since then I re-read the book and the prequel series Drake Sisters Novels. Now I have second opinions about this book and the series as well. Here is my updated review with updated rating.

Six women form a family after they meet in a special grief counselling group that deals with victims of violent crimes. Each of them had suffered extreme loss. While working through their grief, they form a unit loving and trusting each other. They combine their resources, buy large portion of the land in Sea Haven and form their own farming community. Each one of them own five acres and have a home of their own, the rest of the farm being shared among them. Though they don’t relate to each other by blood, they have form a bond through heart. Here are the stories of six strong women calling themselves as Sisters of the Heart, dealing with their past, overcoming unbelievable challenges and finding true love.

Sisters of the Heart / Sea Haven is the spin-off series from the Drake Sisters Novels, especially following the line of Prakenskiis - the seven sons of the seventh son, written by Christine Feehan. They are a similar line to the Drakes but all men born in Russia into a family with magic and psychic powers. As children their parents were murdered by corrupt Russian Government officials, separated from each other and placed in facilities that trained them brutally in every way to become enhanced soldiers and killing machines. Now each of the brothers are hunted by their government as their services are no longer required. It is said that where one Prakenskii settles the others get drawn there and settle. Ilya Prakenskii - seventh son and carrier of the family legacy - settles in Sea Haven after resigning from Interpol, marrying the sixth Drake sister, Joley Drake. Now the remaining brothers follow, leaving their past, striving on a second chance at the kind of life they want and falling for each of the six Sisters of the Heart.

Water Bound is the first installment of the Sisters of the Heart / Sea Haven Series published in July of 2010. The plot revolves around Rikki Sitmore - a Sea Urchin diver and ability to control the element Water - and Lev Prakenskii - sixth Prakenskii brother with power to control animals and birds and telepathy. 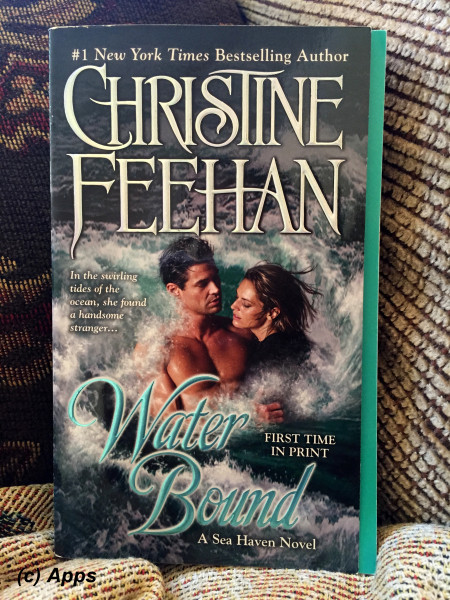 Lev Prakenskii gets thrown off into the ocean from the ship he was on that belonged to Stavros Grastsos, human trafficking Russian mobster - the ship that was thrown over killing Stavros by the magical powers of the Drake Sisters and the masterminds of their husbands few of whom had magical and few highly intelligent and powerful (story line covered in Hidden Currents, the last installment of the Drake Sisters Novels. Check my review here: http://inspirethoughts.livejournal.com/563897.html)). He, however, does not remember who he was or is, why he was on an ocean liner, why he had killer instincts, that why he has to kill someone, that why is someone trying to kill him, why is he loaded with weapons and what his past was.

Rikki Sitmore, one of the Sisters of the Heart living on the farming community, is a Sea Urchin diver who likes to have a routine in her life, a very strict routine. She, being a highly functioning autistic girl, lives her life by her rules. The only food she eats is peanut butter, cannot stand the fluorescent lights, and allows only her "Sisters" to her home. Her element being Water, she has great affinity to Water and hence the occupation. On one of her Sea Urchin diving day she finds Lev Prakenskii who gets washed into the crater where she is picking Sea Urchins under water. She pulls him out of the water and saves him and with much reluctance takes on his responsibility until he becomes better, remembers his past and he can leave to fight whatever his wars are. But Rikki comes with a past as well -  a dangerous fiery past involving fires and families lost - reason for which she doesn’t allow anyone inside her home. Now she had to deal with Lev.

Will Lev find himself or lose himself? What is Rikki's past that haunt her? Who was hunting Lev? Will his memory return? Will he become the savior of Rikki or her death? What will happen when Elle Drake and Jackson Deveau return from their honeymoon? Will the Drake family accept him? Will the Sisters of the Heart accept him?

Christine Feehan again with her master spinning, spun this series seamlessly out of the other one. The bridge built very well giving glimpses from the prequel series and leading into the sequel series. I still agree that this particular book had more repeated paragraphs than many of her books, but now I see the need behind it. As always the sexual element between Rikki and Lev is spot on.

I would say be patient with this book and give it a benefit of doubt before throwing it away like how I did the first time. There is much more meat to it than I realized. You will love the series once you are past this book. Go ahead and give it a try.
Tags: books, critique by amateur, reviews, sisters of the heart
Subscribe