Drake Sisters Novels are the first series in the Sea Haven Novels by Christine Feehan. Hidden Currents is the last and seventh installment in the Drake Sister Novels series published in June of 2009. The plot revolves around the seventh sister Elle Drake - most powerful of all who has everyone's abilities and more - and Jackson Deveau - ex-U.S. Army Ranger and Deputy Chief for Safe Haven. 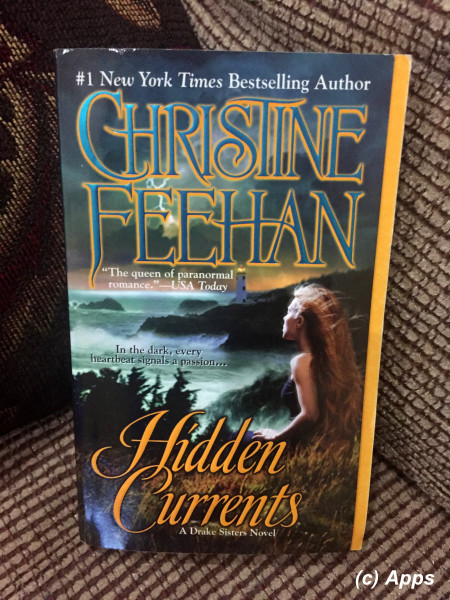 This book wrenched my heart out and filled it with so much sorrow and empathy for Elle Drake and Jackson Deveau. Being a powerful psychic with all the abilities of all of her sisters and many more, Elle wished to put best use of them for the greater good. Her passion to save others put her into hands of Interpol and into an undercover operation of the most hardest criminals bosses, Stavros Grastsos and his twin brother Evan Grastsos dealing with human trafficking amongst other illegal crimes. But, what she didn’t know that Stavros was somewhat similar to her with psychic abilities and also knows about Elle's actual life. He kidnaps her in the intention to have her and make more babies. In an attempt to escape from him, Elle gets re-kidnapped and falls prey to his most vicious ways of crimes he does not hesitate to commit on a woman, in humiliating her, hurting her in every way physically and sexually possible.

Jackson Deveau also shares some of the psychic abilities and tries to reach her to find her. Unable to find her, the sisters cast a circle and find the situation she is in and where she is. Jackson, Matt Granite - fiancée to Kate Drake, Ilya Prakenskii - fiancée to Joley Drake, Aleksandr Volstov - fiancee to Abigail "Abbey" Drake and Jonas Harrington - Chief of Sea Haven and husband to Hannah Drake use their all powers and help to rescue Elle from the clutches of Stavros Grastsos. But Elle feels that Stavros had damaged her and changed her for life.

Will she become herself again? How will Jackson cope all through this and still make Elle feel what she is? How powerful is Stavros and will the sisters fight him? How much can Ilya help the sisters and so do the other fiancees of them to fight this monster? Will they get to cut off at least one head of the human trafficking ring? What is the past that Jackson is fighting or running from? Will he overcome it? How do the sisters, Elle and Jackson fare in this book?

Christine Feehan masterfully spun a web highlighting the darkest crimes a human can commit against another human. Read through it and see the amazing conclusion this terrific series.

Spoiler Alert: Evan Shackler and the biker gang were briefly introduced in the book. I wasn’t sure the first time when I read this book as to what their role would be. But now I am guessing they would be part of another spin-off from the Sea Haven/Sisters of the Heart series (which was a spin-off from the Drake Sisters series). We also get to see one of Ilya's brothers - Lev Prakenskii - in this book albeit he is working undercover with Stavros Grastsos.
Tags: books, critique by amateur, drake sisters, reviews
Subscribe