Drake Sisters Novels are the first series in the Sea Haven Novels by Christine Feehan. Turbulent Sea is the sixth installment in the Drake Sisters Novels published in July of 2008. Another much awaited story of the couple I have been waiting to see how it will turn out since past three books. The turbulent seas that Joley Drake - famous rock and roll singer with the ability of being a spell-singer - and Ilya Prakenskii - famed to be a Russian hit man or an international spy but currently working as a bodyguard for Sergei Nikitin, a Russian mobster - definitely make you wade through the stormy waves of romance, eroticism, international espionage, human trafficking and killers following them. 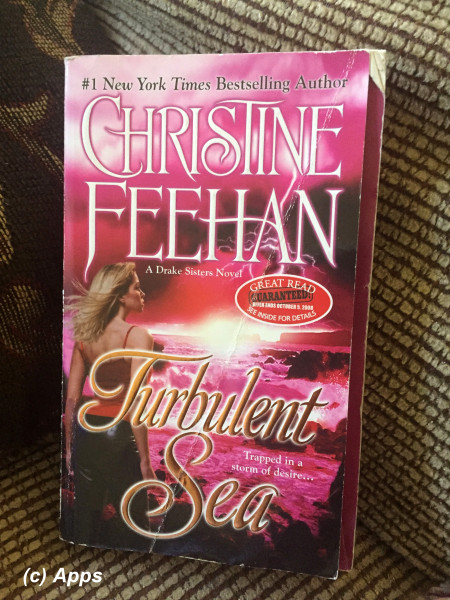 Joley Drake is giving her scheduled performance in Chicago as part of her word tour. She had just completed in Europe and was continuing in US. Ilya Prakenskii stayed as part of the band security keeping close tabs on Joley - not just because there have been threats on her life and crazies following her but because he knows that she is bound to him body, mind and soul and it is his duty to protect her. As he had anticipated one of the fan rushes on to the stage with something that looked like a weapon. Much to his frustration with no fault of Joley - since she cant hide her voice and her voice calls to every man out there and enthralls them - he keeps following her to protect her.

Joley had strict policy that she would not entertain under-age kids (boys or girls), groupies and drugs in her after-the-show parties or anywhere near her band or the roadies.  Her band's manager, Jerry St. Ives, had assured of it. But in one of the after parties that she went to in Europe - thrown by Sergei Nikitin - she notices under-age girls, who were perhaps not more than fifteen with one of the roadies, Dean Walters and another roadie she couldn’t recognize as he had hid his face. She also sees her drummer, Denny, with another girl who definitely was not his girlfriend. And now in Chicago she finds that one of the under-age girls she had noticed in Europe is gone missing and her mother reaches out to Joley for help. Joley entrusts it to her band manager to have a talk with Dean about that girl - since that’s when she had seen the girl with last. Now when no one was making efforts to find the girl, she put that responsibility on the last person she ever thought she would - Ilya Prakenskii.

The investigation into the missing girl brings Joley into the that part of Ilya's world that he wanted to shield her from. And she also becomes the object of another crazed person's attention - Reverend RJ famous for his cult and his mis-treating of women. But what is Sergei Nikitin want with her? That still remains a puzzle. In the midst, Dean Walters get murdered Russian mob-stlye - putting Ilya in the cross-hairs of suspicion by everyone. Does Ilya have anything to do with it? Who he really is? And what is the mark that he had given her means? What does it mean for Joley and Ilya? Will Joley accept him despite the rumors? Will Joley overcome her own flaws as she sees? As the book progresses, one gets into the dark world of mobsters that not only includes drugs and murder, but also human trafficking, of kidnapped young girls and mis-used women.

Christine Feehan has brought into light the major problem of this world with this book. I wish there were many Prakenskiis in this world who could actually end this deplorable business that has been spreading like virus all over the world since centuries. Masterly spun her web on the most delicate and dark topic weaving the elements of fun, romance, adventure and magic along. Do pick it up if you get a chance.

Spoiler Alert: We get introduced to another line of males with special powers similar to the Drake Sisters in this book - the Prakenskii family. And it is said that where one Prakenskii stakes his place and makes home, others are bound to follow finding their true-mates and settle. But each Prakenskii is much dangerous than the youngest that we saw in this book. Be prepared for my review of another series spun off of this series by Christine Feehan soon.
Tags: books, critique by amateur, drake sisters, reviews
Subscribe