Drake Sisters Novels are the first series in the Sea Haven Novels by Christine Feehan. Dangerous Tides is the fourth installment of Drake Sisters Novels published in June of 2006. This time around the story revolves around Libby Drake - the fourth sister with the magic of healing at times bring forth someone/something to life that has almost touched the hands of death - and Tyson Derrick - an adventurist, a brainiac with a Nobel Prize in medicine, a biochemist and part of the Helicopter Rescue Team in Sea Haven. 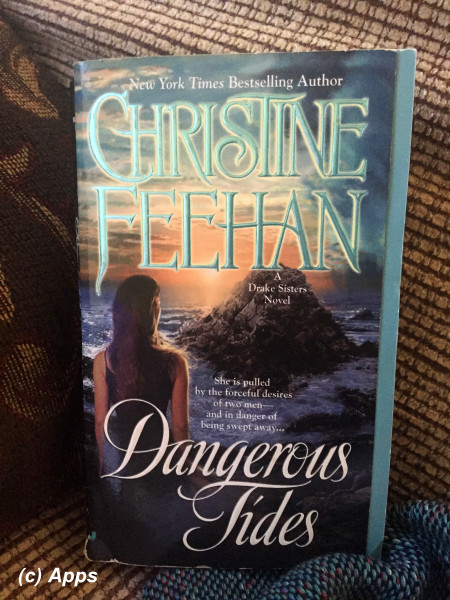 Libby Drake is born with the abilities to heal and naturally she becomes a doctor saving people's lives everywhere along with various other save causes like the Whales, Big Cats Rescue, Environment, Forests and many other. As she had healed quite a few and some she bought time so they could stay a while, her name had been dragged by reporters in all kind of articles quoting her as a "miracle worker" or "faith healer", etc. much to her or her families liking.

Tyson Derrick, the resident famous and rich biochemist had on and off run-ins with Libby Drake that made her his center of attention as well. However, this was more elemental, sexual and involving body, mind and soul for him. However, he never expected that he would see Libby again in the most unfortunate situation he was in. While rescuing Drew Madison for a suicide attempt he does falling over the cliff, Ty's safety harness breaks and he falls down onto the lower jagged cliffs breaking his body into pieces. Libby sees him in the hospital and without her intention she ends up performing a huge healing session - where she takes on the injuries of Ty on herself.

This incident and the stories already in the tabloids made her the target of Edward Martinelli's undue attention. Martinelli although has a big name in pharmaceuticals, he has close ties with crime family out of Chicago. Libby although shrugged off that, she ends up having Martinelli's men on her tailing urging/threatening/forcing her to meet with their boss and do test trials.

That's not all there is to it. Someone is trying to kill Ty and also Libby. In the process Jonas gets harmed. Who is behind the shooting of Jonas? Did Ty's safety harness really break or was it a sabotage? Who is out there who is trying to harm Libby? For what reason? Why did Drew try to commit suicide? Who is throwing all the malevolent feelings towards Libby? What does Martinelli need from Libby? Read through to find out how Libby and Ty wade through all the hurdles with the help of Libby's sisters, their fiancées and the townsfolk how they find answers to all questions and finally find each other.

Another master spin by Christine Feehan involving basic human emotions such as jealousy, love, hatred and happiness woven with elements of danger, intrigue, mystery and magic. We get to see the world of pharmaceuticals and the scams around the test trials of new drugs and struggles of one good scientist fighting against all odds to get a fully functional drug out. Go for it not only to read the next in the series but also for the mystique behind the plot. Enjoy!!!

Spoiler Alert: Finally Its Hannah Drake after all that Jonas Harrington is tied to. We get to see their romance other than battle of words and wits this time around in this book.
Tags: books, critique by amateur, drake sisters, reviews
Subscribe