Grave Apparel is the fifth installment in the Crime of Fashion series by Ellen Byerrum published in July of 2007. Lacey Smithsonian - the fashion reporter The Eye Street Observer in Washington, D.C. - gets pulled into another mystery woven through the world of fashion and news. But, this time it is too close to home or rather should I say to the paper where she works. 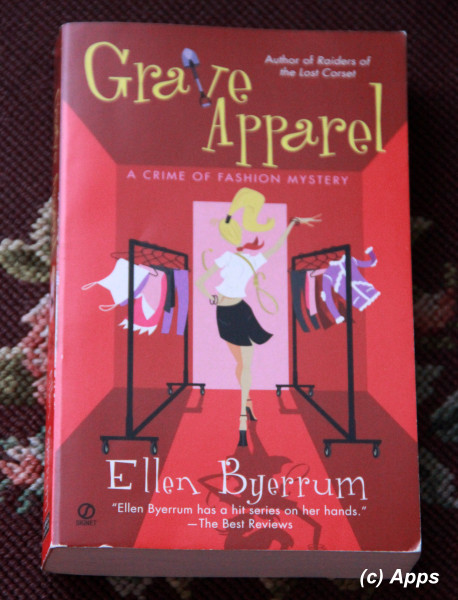 It's Christmas time, but Lacey is not having any fun or peace. Her article on tacky sweaters created a "Sweatergate" across Washington, D.C. and blaming her that she is ruining Christmas. But it was Cassandra Wentworth - the new addition to the paper in the editorial section we saw in the previous book - was the one who had written the article. And adding to that Felicity Pickles - who always wore the fun and tacky sweaters for the festive season - took it very personal about the article. Lacey gets caught between these two and their bickering.  Lacey wondered why Cassandra hated Christmas so much.

However, that was all not that happened with sweaters and Cassandra. The fire between Cassandra and Felicity shifted between Cassandra and Lacey, when Lacey wrote her Fashion Bites related to Christmas Sweaters followed by Mac's apology to clear the confusion on who exactly wrote the earlier article. Cassandra waged an open war of words with Lacey on that although Lacey avoided as much as she could. And one night she receives an urgent call from Cassandra's phone, but it's not Cassandra calling. A young boy uses Cassandra's phone and asks her to come to help the lady as she is hurt. Lacey runs outside only to find Cassandra lying on the floor with a head injury and hurt badly - and wearing a very tacky sweater that was singing "Jingle Bells" that looked very similar to what Felicity wore. The only witness was the young boy who does not divulge any details about him and instead goes on the run.

Now Lacey takes upon herself to find the boy as he had been seen by whoever had hurt Cassandra. The cops think he is a suspect when he is a witness. And since the boy's life is in danger, Lacey puts her life on the line for him. And she was also curious to know why someone wanted to hurt Cassandra? What was the motive? Will she survive? Who was framing Felicity? And she also had to deal with what to make for the Christmas Party that she was invited to at The Donovans - not to forget that her romance with Vic is full on now that he is free of Montana.

Read further to see where all this ends. Signing-off this review with a snippet from another of Lacey's Fashion Bites.

Lacey Smithsonian's Fashion Bites: It's an Organization Town, Right? So Get Organized for the Holidays!
Plan ahead! You're already planning the events, so strategize your looks to suit. Create comfortable and stylish outfits for those meetings and parties and shopping trips, so you won't have to reach into that last minute grab bag called your closet.
Tags: books, crime of fashion, critique by amateur, reviews
Subscribe