Stars: 3 / 5
Recommendation: A fast paced semi-thriller with political elements and how a media person unravels the conspiracy - good read but not as better as other books by Sydney Sheldon.

This review is dedicate to my sister-in-law, Sumina, who celebrated her birthday on this day the post was supposed to have gone. She loves Sydney Sheldon's books.

The Sky Is Falling is a semi-thriller based on political conspiracy and crime written by Sydney Sheldon published in 2001. It revolves around a news anchorwoman for The Washington Tribune Network Television in Washington, D.C., Dana Evans, who seems an unseen mystery between the deaths of the famous Winthrop Family. This book can be called a sort of sequel for his 1997 book The Best Laid Plans - where we had first seen Dana Evans and Kemal. 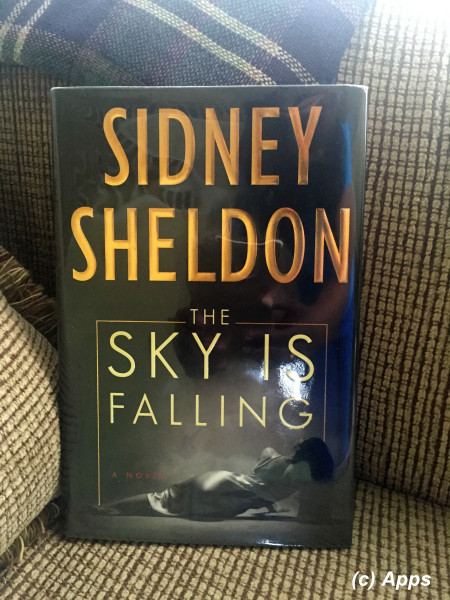 The plot opens with the return of Dana Evans from Sarajevo completing her assignment of war coverage and with an adopted kid, Kemal - who had lost his arm during the bombings there. She is also engaged to Jeff Connors - co-anchor covering the sports details. The first major coverage she gets into as soon as she is back is an interview with Gary Winthrop - the last surviving member of the famed family known for its charity and kindness. The same night Gary gets gunned down in his home by robbers. When she comes to know that all of the Winthrop Family have died in accidents in the past year, she smells a crime and conspiracy. When broached with her boss, Matt Baker, about her theory, he says, "If I didn't know you better, I'd call a psychiatrist and tell him Chicken Little is in my office saying that the sky is falling." Yet, he gives her permission to investigate  - perhaps would be a good opener for their new series Crime Line, if Dana was even a little right about her hunch.

Whether she may be called Chicken Little or not, she rolls her sleeves up and starts her volley of questions to all those who were in contact the day of each of the Winthrop Family member's  so-called "accidents".  She travels from country to country where each incident happened in the course of her investigation. But someone is following her every step and keeping tabs on her; someone closer to her than she can imagine. Were the Winthrops really killed or were they all genuine accidents? If they were killed, what is the reason behind it when everything points them to be clean with no enemies and huge heart and money open for charity? What is the reason for Taylor Winthrop - father of Gary Winthrop - to be appointed as U.S. Ambassador for Russia? What was Joan Sinisi - ex-secretary to Taylor Winthrop - afraid of to speak? Who is spying on Dana? Is her life in danger? Is Kemal's life in danger? Dana drills through all these questions and faces people of higher authority to get answers.

At the same time she is dealing with Kemal's mis-behavior at school - although none initiated by him. She is also questioning hers and Jeff's relationship when Jeff is gone on personal leave to help his ex-wife  Rachel Stevens in her time of need. And not to forget her mother - a constant nagger in her life who reaches out to Dana mostly when she is out of money. In all this midst someone is trying really hard to stop her as she is getting closer to the secret. See, how she unravels one of the biggest conspiracy with starts with death of Gary Winthrop. The Sky indeed is falling!!

A fast paced crime thriller by Sydney Sheldon, although no where near closer to what he had showed us in his book The Best Laid Plans. The whole episode between Jeff and Rachel confused me a lot on the characterization of Jeff. I commend him for being there for Rachel in her time of need, but he was coming very close to getting back with Rachel and leaving Dana.  Then the story-pace...it is really fast for my taste as a crime thriller and contrary to how the political crimes are investigated in reality. Then the role of Elliot Cromwell - new owner for WTN - is unfinished in my opinion. Several questions related to him I felt were unanswered.

In any case, it is a good read that you want to pick up if you want to have a quick fix for a crime thriller but do not want to break your head on it.  Enjoy!!
Tags: birthdays, books, celebrations, critique by amateur, family, reviews
Subscribe