Hostile Makeover is the third instalment in the Crime of Fashion Series by Ellen Byerrum published in August of 2005. The is also the second Lifetime Movie that was made based of the book in the series. I wonder why the remaining books werent made into movies, would have loved to watch them. 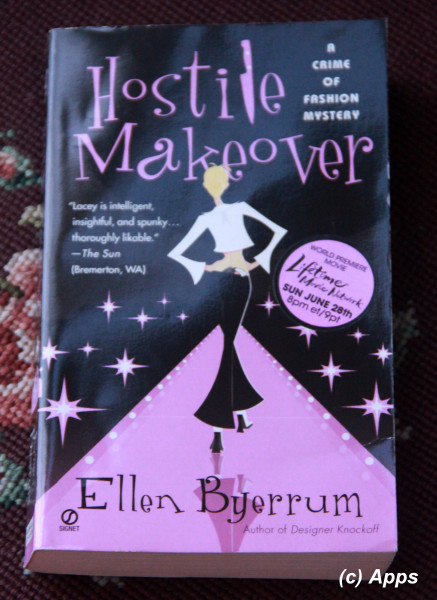 Lacey Smithsonian - the heroine of the series - works for the paper The Eye Street Observer as a fashion reporter in Washington, D.C. - a city she keeps calling as "The City Fashion Forgot". Lacey snags another opportunity - interviewing the reality TV makeover success story Amanda Manville - which is right up her alley. And straight lands into another mystery - Amanda asks her help in stopping a deadly stalker. Despite Vic's caution - her boyfriend or going to be boyfriend depending on the divorce - she starts her own investigation taking all the help she needs from her friends. Now where does this investigation into Amanda's stalker lead her to? What is behind the big Makeover Madness that nobody want to unearth and could even go to the extent of murder to keep it shushed?

This time around however, Lacey gets to experience first-hand what would happen to be even in the shadow of the infamous office jinx - Harlan Wiedemeyer - starting with the narrow escape she has from the falling Krispy Kreme Donuts sign on Harlan's brand-new Volvo. Harlan was a new The Eye Street Observer reporter who covered the "death and dismemberment" beat for the paper. And he has a crush on Felicity Pickles - the resident food blogger / reporter for the paper.  A message left on her answering machine by Marie Largesse - the friendly neighborhood psychic - warning her of some kind of jinx whirling around her head doesn’t make her any happier even though she doesn’t believe in Marie's readings.

Her run-ins with the resident weather reporter, Cassandra Wentworth arent any peaceful either. In all the midst of this she has a romantic getaway with Vic Donovan and an impending visit by her mother and sister. Only place she always finds solace is in either Vic's arms when he is with her rather than trying to fight Montana and when she is digging through her Aunt Mimi's bottomless trunk, that is filled with fabulous vintage clothes, fabrics, patterns and fashion memorabilia.

As said above, an easy murder-mystery read tying up all the elements of fashion together beautifully. And the fashion bites and columns by Lacey continue to spur interest in me. Signing-off with the tidbit from Lacey's Fashion Bites that she writes for The Eye.

Lacey Smithsonian's Fashion Bites: Life Is Not a Dress Rehearsal; You're the Star; Don't Dress Like the Understudy!

You and I may not have Bette Davis's fabulous wardrobe (courtesy of Orry-Kelly) to help us shed our ugly-duckling shells and reveal our beautiful inner swans. But we can borrow Bette's attitude that says, I'm not the understudy. I'm the star.
Tags: books, crime of fashion, critique by amateur, movies, reviews
Subscribe