Designer Knockoff is the second installment in the Crime of Fashion Series by Ellen Byerrum published in August of 2004. Like I mentioned in my previous post about Killer Hair, the movies Killer Hair and Hostile Makeover on Lifetime Movie Channel based of the books of the same name spurred the interest in me to read the series. They are easy to read murder-mystery stories with a twist related to fashion, vintage clothing and style. Although at times I did get lost in the test, but the plot is interesting enough to be captured again. 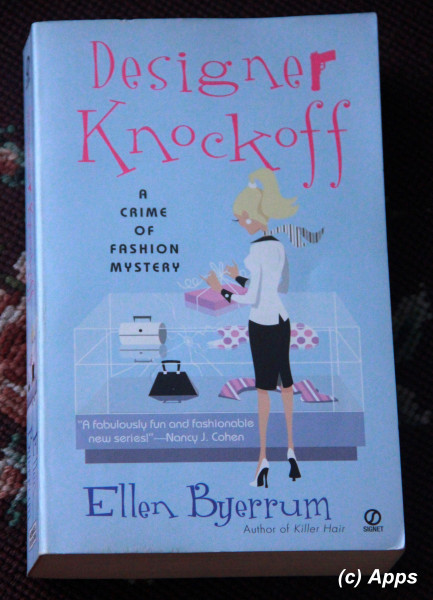 Lacey Smithsonian - the heroine of the series - works for the paper The Eye Street Observer as a fashion reporter in Washington, D.C. - a city she keeps calling as "The City Fashion Forgot".  In this particular book, she is all geared up to attend the Senate Appropriations Subcommittee oversight hearing on a new museum (by House of Bentley owned by Hugh Bentley) dedicated to American fashion, in her 1940s outfit - a Bentley creation by Hugh Bentley himself from his very first collection. It is from her Aunt Mimi's bottomless trunk, that is filled with fabulous vintage clothes, fabrics, patterns and fashion memorabilia. But her contact, Esme Fairchild, is no where to be found. Yet by luck or luck of Aunt Mimis's dress she snags an exclusive with Hugh Bentley. She had been itching to meet with him from when she had read about her Aunt Mimi's notes that Huge "That Bastard" Bentley was not only a legendary American designer but also a notorious playboy, a cad, a louse and a heartbreaking fiend. She wondered if Aunt Mimi and Hugh Bentley had a torrid affair. Nonetheless she gets invited to the gala - opening of the museum by the First Lady.

Incidentally an armed robbery at one the Bentley's Boutique on the same day she meets with Hugh Bentley lands in her lap to write on the fashion angle of the crime. And Lacey hates coincidences. So she opens her own investigation on this. Little did she know that she was opening doors to a disappearance from the 1940s as well. Yes, Gloria Adams - seemed to be a friend of Aunt Mimi - had mysteriously disappeared and was an employee of Hugh Bentley at that time.  Is there a connection with Hugh and Gloria then and Hugh and Esme now? What does all of this have to do with the armed robbery? Where is Lacey heading to with her story?

All of it well spun by Ellen in this second installment. Despite the lengthy descriptions at places, it was an interesting read considering it involved unsolved mystery from past. Again Lacey's friends get involved in helping her, saving her and at times hindering her in the investigation(s).  We get to see a lot of chemistry between Miguel Flores - employee at Bentley's Boutique who took a beating - and Stella Lake - owner of Stylettos and friend of Lacey - which is a refreshing and comical side-plot in the book. Damon Newhouse from Conspiracy Clearing House - hosting the Deadfed dot com website - tangles with her in getting the latest scoop for his conspiracy theories pertaining to the government.  Chemistry between Damon and Brooke Barton - attorney and best friends with Lacey - flickers in this book. Not to forget the love-hate relationship Lacey has with Vic Donovan - who is currently working on getting divorced from his wife Montana. Curious to see where their relationship lands in future books.

As said above, an easy murder-mystery read tying up all the elements of fashion together beautifully. Signing-off with the tidbit from Lacey's Fashion Bites that she writes for The Eye.

Lacey Smithsonian's Fashion Bites: When Bad Clothes Happen to Good People
Lacey's law: When bad clothes happen to good people, fight back. Toss them, give them away, turn them into rags or give them to Goodwill. If you don’t they will haunt you with the tenacity of a polyester monster from the back of the black lagoon otherwise known as your closet.
Tags: books, crime of fashion, critique by amateur, reviews
Subscribe