Stars: 4.5 / 5
Recommendation: A perfect book for those days when you want to get justice for the wronged and enjoy it at the same time.

This was the first book of Jeffrey Archer I had read and incidentally this was his first novel that was published in 1976. The story is about Harvey Metcalfe and the four investors he had duped them thus cheating them of their money and profits. Seems to be a simple plot, isn't it? It's anything but simple. 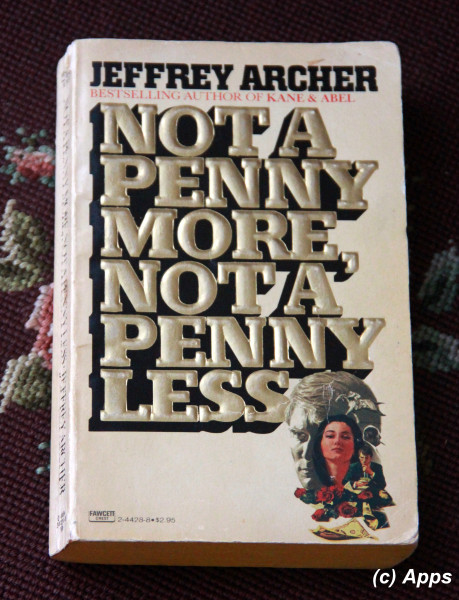 The four investors - Stephen Bradley, an American professor at University of Oxford; Dr. Adrian Tryner, a Harley Street physician; Jean-Pierre Lamanns, a French art dealer with a gallery in London and James Brigsley, heir to an earldom - invest in Prospecta Oil owned by Harvey Metcalfe. But Harvey sells out at the top of the market before it crashes and the four investors suffer heavy losses. Stephen Bradley meets with the remaining three investors and urges them to devise plans that would help them get their money back.

Thus follows the interesting turn of events for Harvey Metcalfe courtesy of these four people. Little does he know that he is being played at his own game. In the process James finds love while the four of them play Harvey. How do they play Harvey? Do they win at this game? How do the four course through their plans - since each of them have to come up with their own plan to take Harvey down - is the rest of the story.

The book started rather slow and almost to the brink of boredom until the actual game began. So I urge the readers to hold patience and get through the first few chapters before putting the book down.

A year after I had read the book I watched a Telugu (Indian language) movie titled Athade Oka Sainyam ( = He's An Army) released in 2004. Much to my humor, the plot was very similar to what goes on in this book, although it being a Telugu movie there was involvement of a little more of sentiment and loss of life than what we read in the book. Here's the trailer of the movie.

I can't resist music - any kind - so here's a beautiful melody from the movie Sung by Sunitha, Music composed by S. V. Krishna Reddy and Lyrics penned by Chandrabose.

Anyway, coming back to the book, I recommend it for those days when you feel you want to break the law for the sake of justice - giving back the gesture to the goonies.
Tags: books, critique by amateur, movies, reviews
Subscribe