Stars: 2.5 / 5
Recommendation: Read it if you want to step away from Christie or Holmes. My recommendation is watch the TV Series instead.

I came across this detective when I was browsing thru Netflix for some good mysteries and chanced upon a series called "Inspector Alleyn Mysteries" produced by British Television. The character charmed me enough to look up the source this series was based off. It was based off of Roderick Alleyn Novels by Dame Ngaio Marsh, a contemporary of Agatha Christie and the likes. Looking up on Amazon for the books of this series I found one that had three novels together. Promptly ordered it to enjoy the read. However the charm faded when I actually read the books. I guess Patrick Malahide (who played the role of Inspector Alleyn in the TV series except for the pilot episode) lived the role better than the one in the book. Anyway, here is my take on the book with the three novels. 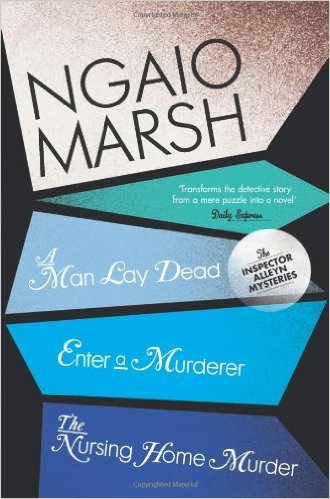 The three novels in the book are the first three in the series of 32 novels by Ngaio Marsh - A Man Lay Dead (originally published in 1934), Enter A Murderer (originally published in 1935) and The Nursing Home Murder (originally published in 1935). The book also has a foreward by the author that explains how she came upon the idea of the character, how she named him, shaped him and then planted him in various murder plots that he effortlessly solves. He may not be as dashing as Sherlock Holmes or as witty as Poirot yet he was shaped to have his own distinction and mannerisms. The author mentions how a rainy day boredom sparked a thought of writing a murder mystery based off of the "Murder Game" that was famous then in England. It is quite interesting to read an author's mind and understand how a book is born. Well, then that is how Chief Detective-Inspector Roderick Alleyn was born. And I must say the foreward had actually wanted me to read the book in its entirety without putting it down. But like I mentioned above, the charm quickly faded.

The first novel, "A Man Lay Dead", as mentioned above is about a "Murder Game" gone wrong ending up in actually killing someone. In the beginning I felt a little confused in remembering the characters, where they were positioned and what role they were playing. However, it was very clear once Inspector replays the game with the remaining characters to get himself acquainted of the situation. Phew! That was a major help indeed. We also get to meet Nigel Bathgate and Angela North, both of whom you will get to see in future novels as well. Nigel, a jorunalist, infact assists the Inspector in solving the crime in this story - sort forming Dr. Watson to Ngaio's Sherlock. He also solves in capturing a Russian brotherhood in the process. Impressive!

The second novel, "Enter A Murderer", is a theaterical one. Incidentally Inspector Alleyn is in the galley watching the performance of "The Rat and The Beaver" when the murder occurs on stage. And ofcourse, Nigel Bathgate assists the Inspector again in solving the crime.

The third novel, "The Nursing Home Murder", The British Home Secretary, Sir Derek O'Callaghan MP dies an hour after he was operated for appendicitis. Initial suspicion points to his family physician, Sir John Phillips, since the last conversation they both had had been left with Phillips threating to kill O'Callaghan. Enter Inspector Alleyn and more layers unfurl and more suspects arise. Again his amanuensis, Nigel Bathgate, helps him while going undercover. In the end the actual killer gets caught although Alleyn is left with mixed feelings about life and love.

All three novels have simple English, straight forward approach, no major twists, involves intelligence rather than bullets and action. The Inspector is not a very charming fellow that make men want to murder him or women want to cling to him, yet his mind, mannerisms, thought process attracts you. Although many female suspects keep telling him and in some cases Nigel as well, that "he is a callous old pig". **WickedSmile**. The language used by the Inspector is quite comical. However, he is no Christie or Holmes to hook you on to his attraction or to Marsh's simple language. At every turn you expect him to spring up and reveal his inner side, but that never happens. The author was true to her character, just my mind couldn’t catch up.

I would recommend the TV series over the book, but you can still read the books if you want easy mysteries.
Tags: books, critique by amateur, reviews
Subscribe