The Fall of Shane MacKade is the final installment in The MacKade Brothers series by Nora Roberts published in April of 1996. The plot revolves around Shane MacKade - the youngest of the MacKade brothers - and Dr. Rebecca Knight - friend of Regan and one who likes everything to be explained. 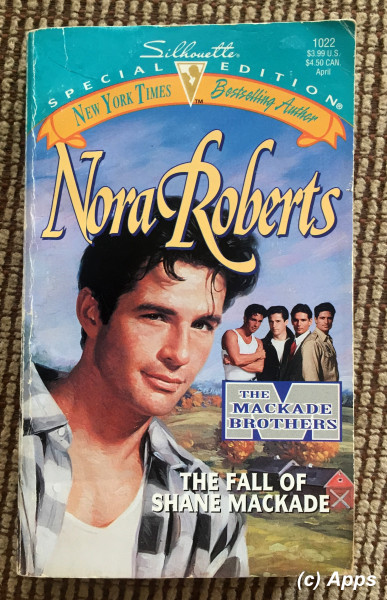 Dr. Rebecca Knight comes to Antietam, Maryland not just to visit Regan but also explore the legend further to give it some tangible explanation - because she is a scientist who needs to do that. But she never imagined that she would get tangled with the delicious Shane MacKade. As for Shane, the baby of the family and " sinfully good-looking, even for a ~MacKade", never seriously considered himself paired with anyone. He enjoyed women and that is what he always wanted to do until Rebecca. And the legend joins them together in more ways than they could think of.

Between his brothers getting married and popping kids out, Shane was determined not to follow the path. Understanding the unexplained was her forte and Rebecca wasn’t prepared to analyze what and explain the irrational feelings in her heart. But the legend was tempting her to dig deeper which means she has no choice but to ignore her heart and work along with Shane.

In the third book we saw one part of the legend related to the Barlow House and decisions that Abigail made then and what Cassie made now. Thankfully Cassie made the right decision and settled the ghosts in the house. This book deals with the other part of the legend where one of the two soldiers entered the MacKade family home injured. A century ago the MacKade family gave solace and helped the injured soldier. Now will the  legend show a way for Rebecca and Shane? Why is Shane reluctant to speak about it? What are the secrets behind Rebecca? What is the closure for the two soldiers who lost their lives so long ago?

An interesting conclusion for the series and well written as always by Nora Roberts. What bothered me was the way Rebecca's character acts up in the beginning. It was so artificial and was getting under my nerves. Thankfully Nora gave her character a chance to explain and go back to her natural self. That Rebecca was much better. And for Shane, no complaints at all - a through and through dangerous and delicious man and who would not want to tangle with him, I say? ;)

I recommend this book and the series for those lazy days when you just want to get lost in the world of words. Enjoy!!!
Tags: books, critique by amateur, mackade brothers, reviews
Subscribe