The Pride of Jared MacKade is the second book in the series The MacKade Brothers by Nora Roberts and published in December of 1995. The plot revolves around Jared MacKade and Savannah Morningstar - single mom for nine-year old Bryan. 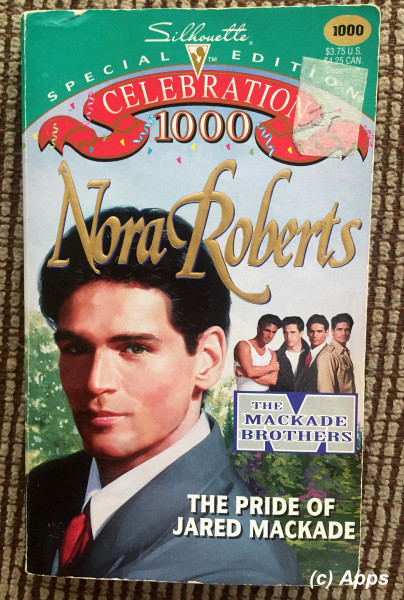 The first book introduced the four brothers, paired Rafe with Regan. We also saw Cassie Dolin and her kids Emma and Connor. Towards the end of the book Cassie files for divorce against her abusive husband. The sub-plot continues in this book as well with. So does the legend about the ghosts of the two soldiers - one from the Union and one from the Confederate Army.

Jared MacKade had one job to do with Savannah Morningstar - hand-over the inheritance her father had left her. The meeting although ends with a lawerly argument, the attractions continues long after he leaves her home. His intrigue increases more so because he finds layers wrapped around her which makes him want to chip them. Savannah does come with complex layers - not a typical heroine that one would see. It was a bit tough to like her in the beginning as she comes off arrogant and proud. But as the story proceeds we get to see her past bit by bit and the puzzle keeps finishing. By the time the story ends you will fall in love with her as well.

An odd combination - Jared well settled lawyer and divorced, occasionally working with his brothers on their family farm; Savannah settled for now with a long and hard past and a nine-year old bullet-like son, Bryan - that one would keep expecting that their relationship would fail. For both are proud as ever. However, Nora Roberts charms us into following them and see them make it in the end.

Jared also represents Cassie Dolin in her divorce while her soon-to-be ex Joe Dolin is jailed for all of the harm he has caused Cassie and the kids. Rafe and Regan provide Cassie with the job of Chatelain to their inn along with an apartment for her and her kids on the top floor of the inn. Devin being the sheriff watches over her. Shane charms her kids into smiles and healthy fun. It was heart-warming to see all the brothers come together and stand with Cassie in her time of need. Regan and Savannah slid into the line easily enough giving their shoulder to Cassie as well. This sub-plot keeps you on the toes as much as the main plot.

Then there is the legend. As much as Jared feels that the woods behind their family farm were his, so does Savannah. And being part-Apache she also senses what had gone through there more than a century ago. The mystique surrounding the two soldiers, the Barlow House and senses that these characters feel in real-life is another layer that only wants you to just peel it all the way through.

My recommendation is that you continue the series and see how each of the brothers' life unfolds and how the legend ties into them. Look for my reviews on the remaining books in the series. Enjoy!!
Tags: books, critique by amateur, mackade brothers, reviews
Subscribe