The Return of Rafe Mackade is the first in the quartet The Mackage Brothers written by Nora Roberts and published in April of 1995. This part begins with Rafe Mackade returning to Antietam, Maryland ten years after disappearing. 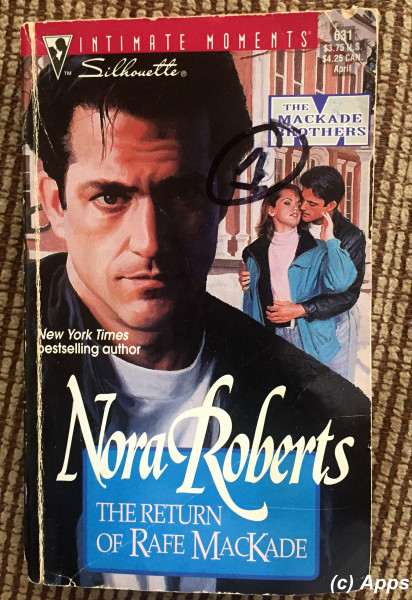 The four Mackade Brothers (Rafe, Jared, Devin and Shane) have always been wild yet hard-working helping out their mother in their family farm. And with their killing looks even as a teenagers gave them the edge. Their life includes brotherly fights amongst themselves and fist fights with the bully Joe Dolin - only when Joe is involved something wrong. Life goes on thus for the four brothers until one day Rafe decides to leave Antietam for good and never return back. Now after ten years Rafe is back , all cleaned up, polished, successful, rich and yet the same roughian look still alive just making him more dangerous.

He buys the Barlow House which is famed to be haunted in the intention of converting it into a bed and breakfast. Regan Jones moves to this small town to start new and her own antique business. Rafe's eye catches her and hires her for furnishing the Barlow House at the same time fanning that attraction. Regan originally thwarts the advances but eventually falls for him all the way through.

A parallel plot runs through the book involving Joe Dolin - the town bully - his wife Cassie Dolan and Sheriff Devin Mackade. From the day Cassie married Joe he had been a bully with never-ending abuse both physical and mental. Even after they have two kids it never ends. Regan advises Cassie after one such abusive day, Regan advises Cassie to leave Joe with his kids.

Nora Roberts has melded all the three well together - the main plot, sub-plot and the legend. You will also notice that the sub-plots and the legend continue to the remaining books in the series. I have not read many authors where there is a strong sub-plot too. These were written at the time that Nora Roberts had been a master with her words. That is why I love the earlier books of her than later ones. Characters are strong, plot is thick with mystery, legend and intrigue; and above all the strings joining them all together form a very intricate web that you want to explore every corner of it. Clearly this was written at a time technology was not as what it is today. I am not sure if the re-prints have changed the plot to have pieces of current era, but the charm of the time from my era as a young woman came to life in front of my eyes. That added to my love towards this book.

I however have to say that Regan was hard to warm up for me. She came off as a weak character in the beginning with weak reasons to be moving to Antietam. But once Cassie got involved and the way she blooms with strength and courage, that’s when I started loving her.

All in all a very good one to pick up and enjoy for those evenings you need a break from the rest of the world. Look for my reviews on the remaining books in the series. My recommendation is that you read all of them to get to know the people in it as well as the plot that keeps thickening from book to book. Enjoy!!
Tags: books, critique by amateur, mackade brothers, reviews
Subscribe