Continuing with the critiques I started in 2015, here is the next in series – a book review.
Prologue: Go here.
For the review on all three books, Go here.

The Oath of the Vayuputras is the conclusion of the Shiva Trilogy by Amish Tripathi published in February of 2013. This was the book that I loved the most in the trilogy. The characterization of Sati and Shiva is superior and makes you wonder if that was the reason why they became immortal as gods in reality. And what a perfect book to review on the day we celebrate Shivaratri - festival honoring Lord Shiva. Happy Shivratri everyone. 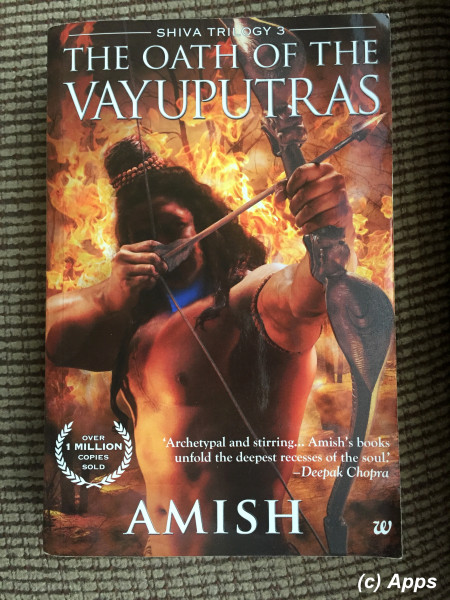 The Secret of Nagas ends with Shiva finding out that his friend Brahaspati is indeed alive and that Somras is not a healing liquid but infact causes ill effects on people of India. More so the process of making Somras is evil - using the waters of River Saraswati causing it to deplete; throwing the waste into Tsangpo River which eventually flows into Brahmaputra River in Branga territory causing their plague and ultimately causing birth defects resulting in the Nagas.

Knowing this Shiva travels to the hidden city of Ujjain and meet the chief of Vasudev pandits, Gopal. Through him he comes to know that Vayuputra Council - an ancient tribe left by previous Mahadev Lord Rudra - trains a member of their tribe as the Neelkanth whenever "evil" rises. Shiva realized that his uncle Manobhu was the member of this council and he was trained as Neelkanth from the beginning. After pondering a lot, Shiva comes to a conclusion that Meluha is the center of Somras manufacturing thus causing so many evils around. He implores to the people of Meluha not use Somras. When unheeded, he declares holy war against Meluha.

He is joined by Branga, Vaishali and Kashi kingdoms thus getting him the aid of the Nagas, the Brangas and the Vasudev elephant corps to attack Meluha. His sons Kartik and Ganesha simultaneously attack Ayodhya. Parvateshwar returns to Meluha as he believes that he need to be loyal to his country and Anandamayi joins him too. Sati attends a peace treaty with her father King Daksha but is attacked by the Egyptian assassins. Thus continues the war that Shiva wages on the Meluha in order to save the country from being harmed further.

What is the fate of each of these warriors at the end? Who had orchestrated the sequences starting from Shiva being trained as Neelakanth? Will the sacrifices of Shiva, Sati, Kali, Ganesh and Kartik open the eyes of everyone around? Will Shiva use the most dangerous astras (weapons of mass destruction)? Do they all end up becoming what we treat them now as - gods? Who learns a lesson and who fails? A tale that one has to read to know the answers.

The strength of Sati amazed me in this tale. All along she had been portrayed as soft with a tenacious heart but this part shows the side of her as a warrior with a strong soul. As for Shiva, one gets to see that he is a powerful leader, a strategist and a true soul-mate to Sati. Again Amish has spun the words around the different incidents and tied the characters well together. His usage of language was also much better in this part. I can't seem to erase the visions I had in front of my eyes while reading this book. The imprint went deep onto the bones for me.

I recommend that you read all three to get the plot, characters and the reasons for why they make decisions that they made. Nicely concluded by tying it up in a neat bow to the mythology we know. Definite pick!
Tags: books, critique by amateur, reviews, shiva trilogy
Subscribe