Continuing with the critiques I started in 2015, here is the next in series – a book review.
Prologue: Go here.
For the review on all three books, Go here.

The Secret of the Nagas was the second book the in the Shiva Trilogy written by Amish Tripathi and published in August of 2011. The story of Shiva and Sati, the truth behind the Nagas and the Chandravanshis continues in this book. 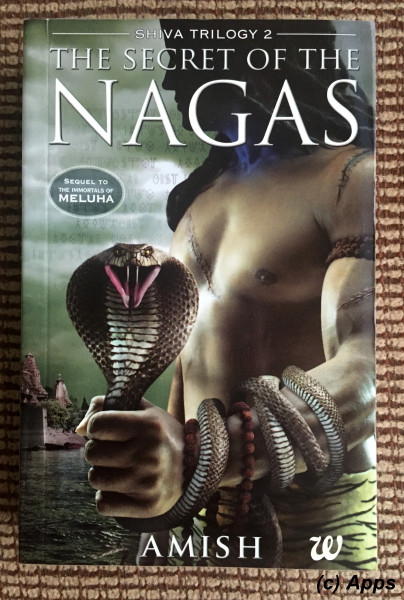 Shiva who was declared as Neelakantha in the first book, because of Somras turning his neck blue, wages a counter-attack against the Chandravanshis when they had attacked the Meluhans. In the subsequent ending Shiva comes to know of a shocking truth. Both the Meluans and Chandravanshis have been waiting for the Neelakanth to save them from each other. Shiva also learns his destiny while visiting Ayodhya, capital of Chandravanshis land Swadweep. The first book had ended with Shiva running to the aid of Sati when a Naga had stood much closer to her.

Shiva thinks that this Naga had killed his friend Brahaspati in the first war. But the Naga escapes leaving some coins with odd engravings. The clues lead them (Shiva, Sati, General Parvateshwar, his associates Nandi and Veerbhadra, Ayurvati the doctor, and Bhagirath and Anandamayi, the prince and princess of Ayodhya) to Kashi where they meet the Brangha community to find more about the Nagas. While there Parvateshwar gets injured gravely. But Divodas - chief of Brangha community administers a herb that heals him immediately - a herb that grows only in Panchavati. And Branghas have been allied with Nagas trading the herb for being saved from mortal plague. Shiva decides to travel to Branga to learn more about the medicine for which he needed special ships that would take six months to make. In that six months Sati gives birth to Kartik, her son with Shiva.

While Shiva embarks the journey to Branga, Sati stays back at Kashi help the King. A group of lions attack the King, so Sati and her soldiers fight against them. When they reach a point of losing a group of Nagas headed by a woman and a man help them in killing all the lions. Sati is shocked to learn that the woman was her twin sister Kali and the man was her son, Ganesha, from her first husband. Her father Daksha had denounced them because they were born with deformities - Kali with an extra pair of functioning hands and Ganesha with the face that looks like an elephant. Devastated she takes them back to Kashi and waits for the return of Shiva.

Thus follows the second leg of Shiva's journey that started when he first left his tribe to Meluha. Will Shiva find the recipe for the medicine? Will he accept Ganesha since he had killed his best friend? Who is Parasurama - the man who lives a secluded life in Branga? Why is Daksha so against the deformed folks called Nagas? What other crimes had Daksha committed? What will Shiva and Sati find when they travel to Dandak Forest to the Naga capital? What is the greatest secret of Nagas?

All of it can be found filed in the pages with immortal words, if I may say. Another episode that I could not put it down until I finish it. Brilliantly written by Amish pulling all the pieces together and still keeping the essence of the actual mythology in it. I always wondered if the so called mythological Gods were humans in reality so many eons ago but with special powers. Hence they became Gods. Amish's book brings my thought to life and that simply tickled me to continue the read. Hope you get tickled too and pick this book as your next one.
Tags: books, critique by amateur, reviews, shiva trilogy
Subscribe