Continuing with the critiques I started in 2015, here is the next in series – a book review.
Prologue: Go here.
For review of all books under this series: Go here.

Legend has it that the Three Sisters Island was created by the magic of three witch sisters (representing the three elements - Fire, Earth and Air) in the 17th century to keep their people and themselves safe from the Evil behind the madness of Salem Witch Trials. But soon after the three sisters made decisions that caused ripples in the future time. And 300 years later three women - descendants of the original three sisters - would come together on the island again to right the wrong done by their ancestors and kill the Evil forever.

Face the Fire in the conclusion part of the Three Sisters Island Trilogy by Nora Roberts and published in May of 2002. The plot revolves around the third sister / witch Mia Devlin (Fire) and her childhood boy friend Sam Logan. 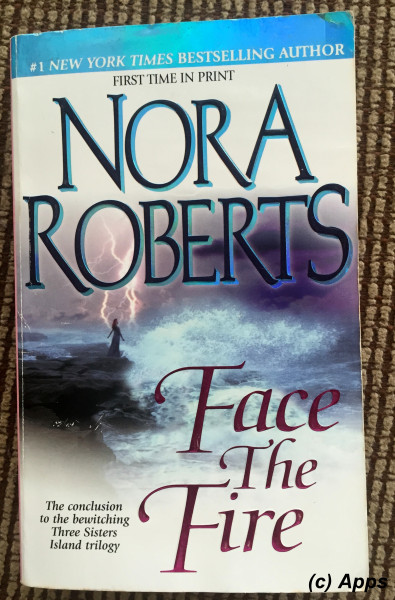 Mia Devlin, after being spurned by her lover 12 years ago, settles herself in the island with her café-book store, her magic and spells, her small family and friends and above all content with herself. Reconciling her friendship with Ripley in Book 2 and having Nell settle-in adds to her content. But her heart always craved for Sam that never was full-filled. After 12 years Sam Logan comes back to the island not only to claim his legacy and his family-owned business but also to stake his life permanently with Mia. But, will Mia take him back-in?

Mia is portrayed as strong-willed, proud and at times comes off arrogant.  The strong wall that she builds around her is not to stop others from coming in, but for her heart would not break again. That also makes her take decisions independently without involving others although she wants everyone a team. But someone who has gone through some hard stops in life I totally get her character and can only empathize with her.

Sam Logan is possessive, powerful and arrogant yet humble enough to take the kicks in his wherever Mia wants to for badly handling their situation. He also is the fourth witch (Water) that the Evil does not know about. Comes in handy for them to fight against it, but Mia refuses to take his help. She has her reasons and he has his reasons.

This cat and mouse chase goes on a little longer in the book than the actual plot. Except for that flaw, the story-line weaves in perfectly with the different plots started in the first two books. I was very much looking forward to see how the four witches and two normal humans  put in their strengths and weaknesses to defeat the 300-year old Evil.

I would recommend that you read all the three books to get all of those blank pockets filled in that might have risen in the first two books. Also wait for the characters to evolve before you write-off on them. It definitely will leave a very sweet taste at the end. Enjoy!! :)
Tags: books, critique by amateur, reviews, three sisters island
Subscribe