Dance Upon the Air was the first book in the Three Sisters Island Series by Nora Roberts published in June of 2001. This is a story about friendship, fate, legend and mysterious way one's heart works. 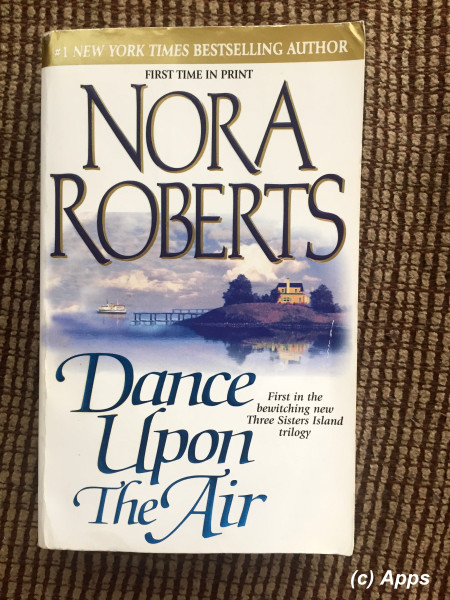 Legend has it that the Three Sisters Island was created by the magic of three witch sisters (representing the three elements - Fire, Earth and Air) in the 17th century to keep their people and themselves safe from the Evil behind the madness of Salem Witch Trials. But soon after the three sisters made decisions that caused ripples in the future time. And 300 years later three women - descendents of the original three sisters - would come together on the island again to right the wrong done by their ancestors and kill the Evil forever.

Nell Channing comes to Three Sisters Island escaping from her abusive husband, Evan Remington. As soon as she landed on the island she felt like she had reached home and realized that this would be one place that she can put roots in - unlike other places where she had been running from always. Little did she know that her arrival had been timed with the 300 year old legend that originally had caused the Three Sisters island to be created. Nor did she really understood who she was and what role she would play in that legend. Yet, she looked forward to settle there.

Zach Todd, the island Sheriff, falls hard for the pretty Nell who takes up a job at a café-book store owned by Mia Devlin. He pursues Nell subtly to eventually give her the confidence to trust him and also fall in love with him. Although she doesn’t know her potential yet, Mia recognizes her as the third sister (Air) that would full-fill the legend. Mia being one sister and Ripley Todd (Zach's sister and Deputy Sheriff of the island) being the second one. Together they bond, learn, overcome hurdles and stand against the Evil lurking at the edges of the island.

The book was well written as usual by Nora and she being a master of spinning romantic tales, had done complete justice to the plot. The intrigue and interest to read further the book is hooked into the reader's brain from the beginning of the book. She adds twists and turns all along making the characters fall in place. The evil from Nell's past, evil from the 300 year old legend - sound so real that at places your hair would stand. However the innocent love, the beautiful romance between Nell and Zach balances the chillness well.

Only flaw I found with the plot  was as much as the story was built in preparing the three to face the evil, when the evil actually comes in front of them, the fight was over in a flash - with just a spell. Perhaps I would liked to see Evan going through punishment a bit longer just to even the scales. However, from Nora's perspective this was not about Evan but it was all about Nell. So it does make sense to have a clean and quick cut so Nell can move on with her life sooner.

This was the first book I had picked up of Nora Roberts to read (approx 3 years after she had released it). And I had never looked back. Although I do not like some of her books as much, this is one series that had stuck to me. I must have read these several times in the subsequent years. Hence highly recommend to try this book filled with witches and spells, good vs evil, love and friendship, legends and reality. You will not regret it.
Tags: books, critique by amateur, reviews, three sisters island
Subscribe