The third book in The Land of Stories series by Chris Colfer was A Grimm Warning published in July 2014. This review is dedicated to my nephew, Sohan, who had turned 5 this year. This is for his interest in reading the fantasy and loving it as much as I do. 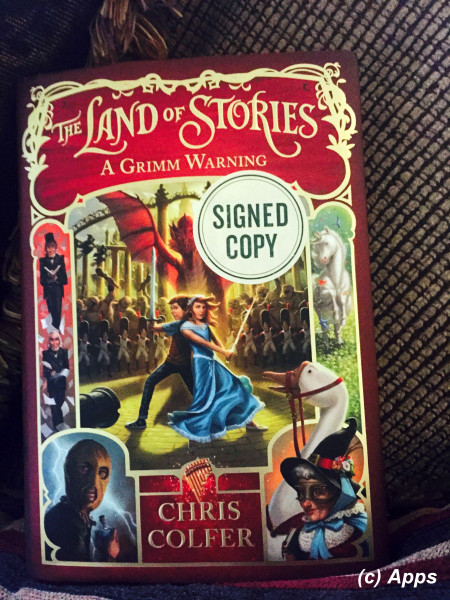 Alex Bailey and Conner Bailey are twins (thirteen year old in this book) who were born of a mortal human and a fairy-tale land man. Their birth had caused to cement the bridge between the two worlds and turned both the worlds to move at the same time. However, it did not come with consequences as seen in the previous two tales. At the end of The Enchantress Returns (Book II), Alex remains in the fairy-tale world with her grand mother - Fairy Godmother - and Conner returns back to our world along with his mother. Fairy Godmother closes the portals between both worlds permanently. However Alex and Conner each get a piece of magic mirror through which they could see each other and talk - like our world Skype. The third book picks off at this juncture.

Alex is settled in the fairy-world as apprentice to her grandmother learning to grant wishes  which more than often seem to go wrong much to her frustration. She reaches out to her grandmother for help and learning. And she is also preparing for the Inaugural Fairy Ball being given in her honor of joining the Fairy Council.  Meanwhile Conner is excited to go on a school trip to Germany with Mrs. Peters and other students to attend the first reading of three stories from Grimm Brothers that were found in a time capsule. He was doubly pleased when Bree Campbell is part of the trip - he has a huge crush on her.

All seems well until the three stories are read. Conner finds that two of the stories are same as what his father had told them time and again and those he had written up with a few changes - The Curvy Tree and The Walking Fish. However, the last story comes with a really grim warning - as in Grimm brothers warning the Fairy-tale world that a huge army was reaching them to attack and take-over. Per the story a magical bird helped provide an enchanted map that would take the army 200 years to travel. Since the tale was written in 1811, Conner realized that it was about time for army to reach the fairy-land and wreak havoc.

He tries to reach out to Alex but fails and reaches out to Mother Goose and tells the tale. Mother Goose confirms that the tale is true and that the army is The French Grand Armee headed by General Marquis. But the portals were all closed so she never had revealed this to anyone. Apparently somewhere the portals had been open. She directs Conner to find that portal at his end so he can get to fairy-tale land and help face the army. Bree overhears the conversation and joins in the search. Together they take hints and clues from Mother Goose and finally reach Neuschwanstein Castle in Germany. There with the help of a local boy Emmerich Himmelsbach leads them to the portal to fairy-tale land. Unawares of all of this, Alex is having her Inaugural Ball, attending wedding, helping out a friend and experiencing her first date. It falls on to the shoulders of Conner - and inadvertently on Bree and Emmerich as well since they get sucked into the portal - to explain the fairy-tale kingdoms the situation and help them prepare for war and save both worlds. Thus begins another adventure.

Chris Colfer again at his best with this third installment has put all in words so vividly that more than often I saw pictures instead. The plot however gets a bit more complicated than the previous two books and it is a good thing as the kids are transitioning to teenage years too. It put me on edge in some of the chapters when I wanted to know what is the weapon that General Marquis would use against all the powers of fairies and their kings and queens. When I wanted to know who the masked man was that was in the top-most cell of Pinnochio Prison. Got me intrigued when Little Bo Peep challenges Red Riding Hood's claim to the throne and wondered what would be the result. Got me routing the fairy-tale land characters when the war prevails. Broke my heart at some of the consequences of the war and what befalls on Alex and Conner - for they are far too young to face that much sadness.

So many emotions swirled through while reading this book, yet none over took the other. The balance was perfect with the plot. Definitely a good pick for ay 11+ year old as well as any adult who would want to go back to the forgotten fairy-lands.
Tags: books, critique by amateur, land of stories, reviews
Subscribe