Murder Game is the seventh installment in the Ghostwalker Series by Christine Feehan and published in December 2008. The plot brings together two Ghostwalkers - Kadan "Bishop" Montague - second-in command to Captain Ryland "King" Miller, heading the GhstWalkers Team One - and - Tansy Meadows - one of Dr. Peter Whitney's Orphan Girls from Group One - and it begins in the Sierras. 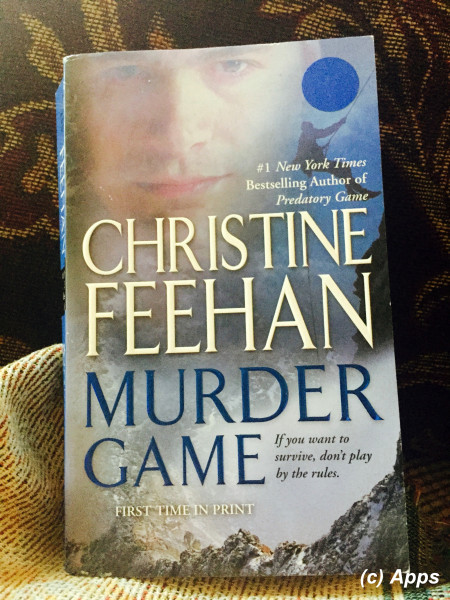 In Shadow Game we had seen that Dr. Lily Whitney-Miller, married to Captain Ryland "King" Miller - head of Team One - find the details of the Orphan Girls that Dr. Peter Whitney had experimented on along with Lily. Now adopted or held in a different lab or on their own or more girls added as years progressed, Lily and Ryland are determined to find those girls now women, rescue them and provide a safe haven. So far they have rescued Dahlia Le Blanc, Iris "Flame" Johnson, Briony "Bri" Jenkins, Marigld "Mari" Smith and Saber Wynter.

After spending past three books with the Team Two GhostWalkers, Christine returns to Team One with this plot. Of course, the relationship between the two GhosWalker teams strengthen more and more as each plot proceeds.

A serial killer is on the loose and the GhostWalkers are being blamed for the murders. Kadan "Bishop" Montague is assigned to find the serial killer and prove that it isn't one of their own doing the killings. But he needs Tansy Meadows to track the serial killer using her special abilities. However, when he finds Tansy, neither expect the strong sexual pull towards each other, thanks to Dr. Whitney's breeding program experiments, nor they expect someone hunting them. Now they become part of this murder game being orchestrated by someone who wants to eliminate all of them as part of this game, a game that turns more sinister and sinister as each page turns.

This plot reminded me a lot of Carpathians, the characters from Christine's Dark Series mostly because of the ability to read and live in each other's minds. Pretty close to a cross-over between the two series, but I feel that she basically repeated the ability in the GhostWalkers but slightly differently.

Murder and Mayhem is usually one of the genre that I like to read. However, in this plot, the way the murders are committed, the cruelty the killers show, gave me shivers and shudders, all through the plot; made me worried so much for our heroine Tansy more than other girls I read so far. Reminded me of an episode from Criminal Minds, TV Show that is based on a game but involving humans who are hunters and the hunted. **Shudders**

I always thought what would happen to those super soldiers that failed the psychic test and yet were enhanced. Some definitely worked with Dr. Whitney in his various programs, going to the dark side. But I had a notion about those who don’t want to turn to the dark side, who want to fight and live honorably but still stuck with Dr. Whitney and his allies. Christine finally picks up those soldiers in this plot. Glad she thought of them and gave them a good closure.

Here in this plot, we see the beginnings of her usage of words such as "rewarded", "obeyed", etc., which always grated me, although in this book I got the context in whuch she was using those words. And also there is repeat paraphrasing in very chapter, which was unusual in her previous books. Surprisingly there are quite a bit of grammatical and character errors in this book, which normally is not seen so much in Christine's books.

A fantastic web again spun by Chrsitine Feehan between Tansy and Kadan delving into the minds of serial killers and fanatics at the same time. It could not have been easier for the author to write about a mind as such and yet she pulled it off. Very gripping tale with elements of mystery, romance, action and thrill all along increasing the reader's interest to look forward to see what else the ghostwalkers could do.

Another good pick in the series that will definitely put you on the edge.

1) Plot Reveals:
a. The GhostWalkers tease Kadan with Neil Young's 1970 song Cinnamon Girl when he comes out of his room smelling of Cinnamon. Having never heard that song, I peeked into google and impressively enough it had reached #55 on Billboard's top 100 in 1970 when released as a single. More about that song here. And here is the video of the same

b. Tom Delaney, Sr., a decorated military man, enhanced by Dr. Whitney and used by the antagonist in the plot, despite his failing the psych evaluation, finally takes Kadan and his team's help in trying to reverse his enhancements and give him some measure of ease to live a normal life for a discarded GhostWalker. He will join Kadan's team once the treatments are complete and he is deemed safe.

c. GhostWalker Team Two, Paramilitary Ghostwalkers Team (Navy SEALs) working with NCIS; first introduced in the second book, Mind Game; under direct command of Rear Admiral Frank Henderson. They plan to build a base in the mountains of Montana where Jack and Ken already reside as of Predatory Game.
i. Headed by Logan "Max" Maxwell.
ii. Jack Norton, oldest of the Norton Twins. His story is told in Conspiracy Game, and marries Briony "Bri" Jenkins, one of the orphans from Group One, at the end of that book. Bri is pregnant with twins as of that plot.
iii. Ken Norton, the second Norton Twin. His story is told in Deadly Game, and married Marigold "Mari" Smith at the end of that book.
iv. Jesse "Jess" Calhoun - His story is told in Predatory Game, and married to Saber Wynter at the end of that book.
v. The rest of the team consists of Martin Howard, Neil Campbell; Trace Aikens.
vi. When the GhostWalker Team Two was introduced in Mind Game, Christine had mentioned one of the members as Todd Aikens. But in Deadly Game, she names him Trace Aikens. Is he Todd or Trace? Had she named him first as Todd and then later changed it to Trace? Or are there both Todd and Trace?

d. GhostWalker Team Three: First introduced in Predatory Game - Brian Hutton;
i. Brian Hutton is interested romantically in Patsy Calhoun in that plot. Is he paired with Patsy? But Patsy isnt a GhostWalker? Or is she?

e. Group One of Dr. Peter Whitney's Orphans: Twelve orphan girls on whom he had conducted his experiments to make them psychically enhanced - Lily Whitney-Miller, the only girl he had adopted for himself; Dahlia Le Blanc; Iris "Flame" Johnson; Briony "Bri" Jenkins; Marigold "Mari" Smith; Tansy; Jonquille; Laurel; Rose; Camellia "Cami".
i. More about them is shown in Deadly Game
1) Ivy, supposedly killed by Dr. Whitney to teach the orphans girls a lesson;
2) Rose, Cami and Mari and two others live in a secret compound that Dr. Whitney has for his own army of super soldiers. Unclear if they were part of the first group of orphans or were they a second group of orphans.
3) Rose is pregnant with another GhostWalker at the compound, Kane, with whom she is paired with. In their effort to escape from the compound, Rose gets separated from Kane and her sister. A clear segue that a story would soon come up for Rose and Kane. But who is Kane? Which group does he belong to?
4) In that escape effort, all the remaining four sisters also spread away. Curious to see how Christine will bring them back in.

f. Group Two of Dr. Peter Whitney's Orphans: Fist introduced in Predatory Game. Not clear if they were part of the 12 original orphans he had or were added on later - Saber Wynter, Thorn. Unlike his first group, they are not named after flowers.

g. The Fontenot family is introduced in Night Game - Raoul's three brothers (Wyatt, ) and his grandmother, Nonny. Wyatt is shown to have romantic feelings towards the lost and found girl, Joy Chiasson.

h. Dr. Peter Whitney who thought be dead in the first book Shadow Game, is shown to be alive as of this plot with more devious plots in his mind. As the books progress, we see the various kinds of horrific experiments he had done on the GhostWalkers - tracking them with a computer chip in their body; pairing the Orphan girls not only with one of the three Ghostwalker teams, but his personal enhanced team that he created using the rejected psychic candidates; didn’t matter if the girls liked the men or not but he wanted the men to have sex with them to produce super soldier babies; injecting them with Zenith, a fast-healing medicine but with serious repercussions. He is revealed to be psychic in Deadly Game.

i. Dr. Peter Whitney's allies in his devious plots are:
i. Senator Ed Freeman, the one the Norton twins tried to rescue and were in turned kidnapped in Congo, is married to Violet Smythe - one of the Orphan Girls from Dr. Whitney's Group in the secret compound. She is also a GhostWalker paired to the Senator. The Senator gets shot in the ensuing battle between his super soldiers and Whitney's during the escape attempt of the orphan girls in the compound, in Deadly Game.
ii. Jacob Abrams, a loaded banker, and Senator Freeman's father, Andrew Freeman.

3) Grammatical / Historical / Location / Character Errors:
a. On Pg. 27, Line 10 from bottom, it should be "…could tell that she found…"
b. On Pg. 107, Line 8 from bottom, it should be "…what their relationship with…"
c. On Pg. 166, Christine first shows Kadan undressing Tansy completely, but then later in the page, she shows Kadan pushing his hand inside her shirt. Then on Pg. 167, she shows Tansy as naked in the beginning of their lovemaking scene. Where did the shirt come from in the first place, then where did it go off without Kadan or Tansy wearing it or removing it?
d. On Pg. 201, Line 5, it should be "…hell have you done to…"
e. On Pg. 394, Line 12, it should be :…skills given to them and…"
Tags: #55, books, critique by amateur, ghostwalker series, reviews
Subscribe