Mar 17 2019: Updated the review and added Spoiler Alerts.
Continuing with the critiques I started in 2015, here is the next in series – a book review.
Prologue: Go here.
For review of all books under Ghostwalker series: Go here.

Stars: 3.5 / 5
Recommendation: A definite pick if you are into paranormal romance with a touch of eroticism and the unbelievable but for a  few lull moments.

Predatory Game is the sixth installment in the Ghostwalker Series by Christine Feehan and published in February 2008. The plot centers around Jesse "Jess" Calhoun - GhostWalker from Team Two - and Saber Wynter - one of Dr. Peter Whitney's Orphan Girls from Group Two - and it is set in Sheridan, Wyoming. 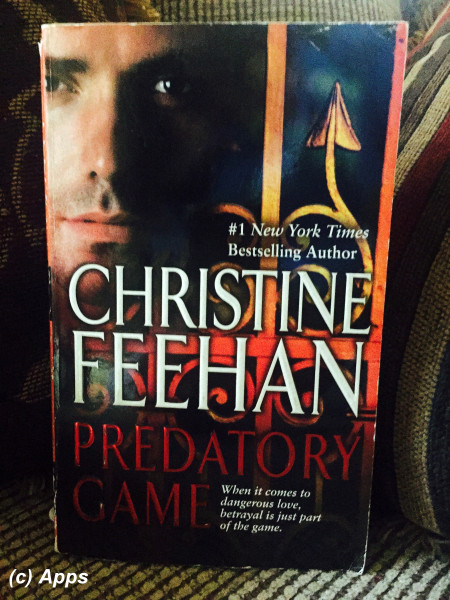 In Shadow Game we had seen that Dr. Lily Whitney-Miller, married to Captain Ryland "King" Miller - head of Team One - find the details of the Orphan Girls that Dr. Peter Whitney had experimented on along with Lily. Now adopted or held in a different lab or on their own, Lily and Ryland are determined to find those girls now women, rescue them and provide a safe haven. So far they have rescued Dahlia Le Blanc, Iris "Flame" Johnson, Briony "Bri" Jenkins and Marigld "Mari" Smith.

Jesse Calhoun was first introduced in the second book, Mind Game, in which he goes through immense torture protecting Dahlia Trevane and in the process he loses his ability to use his legs from below knees and confined to wheelchair. At the end of that book, we saw that after getting treated for his torture, he decides to go back to his home town to run his radio station, although he runs missions from his office there when needed.

I had been waiting for Jesse's story since that second book. Even though Ken captured my mind, somewhere in the back Jesse lurked in my brain and couldn’t wait to see how Christine would write his tale. And finally here it is.

Jesse Calhoun hires Saber Wynter for his nightly radio show, then offers her shelter in his home. However, the instant chemistry they have is hard to ignore and afraid to be acted upon by them. But, someone is hunting them. At the crucial time when both of their pasts are catching up with them and while they sort out their feelings for each other, the prey becomes the predators in another of the action packed thriller by Christine.

So long in the series, Christine has been showing the various experiments that Dr. Whitney conducted on the GhosttWalkers and his personal team of super soldiers. However, we see a different side of those experiments in this plot, where there is some kind of good coming out of it. Nonetheless they are still experiments, with a second point of view.

Christine gives us a lot of medical jargon and hypothesis into medical miracles, that actually happen in the plot, but are a distant future in real, perhaps. However, all that talk made me wish that it would indeed become real and be used for good rather than for evil.

I could empathize with Saber very much here especially after reading what kind of experiments had Dr. Whitney performed on her. One gets to grow angrier and angrier at Whitney. However one cant route for Saber and Jesse - the underdogs who come out shining in the end. Another web spun well again by Christine however  repeat paraphrasing is seen occasionally. But for that this is a definite recommendation for continuing the series on.

1) Plot Reveals:
a. Christine thanks her dear friend Cheryl L. Wilson in this book. She has thanked Cheryl in several of Carpathian books from the Dark Series and also in the Leopard Series. We, as readers, know Cheryl Wilson as C. L. Wilson, and for her famous series Weathermages of Mystral.
b. Jesse has an older sister Patsy Calhoun, whose fiancee, David, was killed by Dr. Whitney.
c. In this plot it was more clear that Dr. Peter Whitney has more than one group of orphan girls that he had experimented on, just like the GhostWalker teams and his personal army.
d. It is also revealed that Dr. Peter Whitney has two more teams of GhostWalkers who are sent on missions similar to the two teams we have been reading so far. And we meet one from one of those teams in this plot. More meat for more plots for Christine, for certain.

c. GhostWalker Team Two, Paramilitary Ghostwalkers Team (Navy SEALs) working with NCIS; first introduced in the second book, Mind Game; under direct command of Rear Admiral Frank Henderson. They plan to build a base in the mountains of Montana where Jack and Ken already reside as of this plot.
i. Headed by Logan "Max" Maxwell.
ii. Jack Norton, oldest of the Norton Twins. His story is told in Conspiracy Game, and marries Briony "Bri" Jenkins, one of the orphans from Group One, at the end of that book. Bri is pregnant with twins as of that plot.
iii. Ken Norton, the second Norton Twin. His story is told in Deadly Game, and married Marigold "Mari" Smith at the end of that book.
iv. The rest of the team consists of Martin Howard, Neil Campbell; Trace Aikens.
v. When the GhostWalker Team Two was introduced in Mind Game, Christine had mentioned one of the members as Todd Aikens. But in Deadly Game, she names him Trace Aikens. Is he Todd or Trace? Had she named him first as Todd and then later changed it to Trace? Or are there both Todd and Trace?

d. GhostWalker Team Three: First introduced in this plot - Brian Hutton;
i. Brian Hutton is interested romantically in Patsy Calhoun as of this plot. Is he paired with Patsy? But Patsy isnt a GhostWalker? Or is she?

e. Group One of Dr. Peter Whitney's Orphans: Twelve orphan girls on whom he had conducted his experiments to make them psychically enhanced - Lily Whitney-Miller, the only girl he had adopted for himself; Dahlia Le Blanc; Iris "Flame" Johnson; Briony "Bri" Jenkins; Marigold "Mari" Smith; Tansy; Jonquille; Laurel; Rose; Camellia "Cami".
i. More about them is shown in Deadly Game
1) Ivy, supposedly killed by Dr. Whitney to teach the orphans girls a lesson;
2) Rose, Cami and Mari and two others live in a secret compound that Dr. Whitney has for his own army of super soldiers. Unclear if they were part of the first group of orphans or were they a second group of orphans.
3) Rose is pregnant with another GhostWalker at the compound, Kane, with whom she is paired with. In their effort to escape from the compound, Rose gets separated from Kane and her sister. A clear segue that a story would soon come up for Rose and Kane. But who is Kane? Which group does he belong to?
4) In that escape effort, all the remaining four sisters also spread away. Curious to see how Christine will bring them back in.

f. Group Two of Dr. Peter Whitney's Orphans: Not clear if they were part of the 12 original orphans he had or were added on later - Saber Wynter, Thorn. Unlike his first group, they are not named after flowers.

g. The Fontenot family is introduced in Night Game - Raoul's three brothers (Wyatt, ) and his grandmother, Nonny. Wyatt is shown to have romantic feelings towards the lost and found girl, Joy Chiasson.

h. Dr. Peter Whitney who thought be dead in the first book Shadow Game, is shown to be alive as of this plot with more devious plots in his mind. As the books progress, we see the various kinds of horrific experiments he had done on the GhostWalkers - tracking them with a computer chip in their body; pairing the Orphan girls not only with one of the two Ghostwalker teams, but his personal enhanced team that no one is aware of and those who had never passed the psych evaluation and are cruel as they could come; didn’t matter if the girls liked the men or not but he wanted the men to mate with them to produce super soldier babies. Injecting them with Zenith, a fast-healing medicine but with serious repercussions. He is revealed to be psychic in Deadly Game.

i. Dr. Peter Whitney's allies in his devious plots are:
i. Senator Ed Freeman, the one the Norton twins tried to rescue and were in turned kidnapped in Congo, is married to Violet Smythe - one of the Orphan Girls from Dr. Whitney's Group in the secret compound. She is also a GhostWalker paired to the Senator. The Senator gets shot in the ensuing battle between his super soldiers and Whitney's during the escape attempt of the orphan girls in the compound, in Deadly Game.
ii. Jacob Abrams, a loaded banker, and Senator Freeman's father, Andrew Freeman.

3) Grammatical / Historical / Location / Character Errors:
a. On Pg. 8, Christine mentions that it had been 10 months since Jesse and Saber have met. But on Pg. 11, she eludes to their time as 6 months.
b. On Pg. 178, Line 22, it should be "…to have to admit to…"
Tags: books, critique by amateur, ghostwalker series, reviews
Subscribe