Deadly Game is the fifth installment in the Ghostwalker Series by Christine Feehan and published in February 2007. The plot centers around Ken Norton - GhostWalker from Team Two and twin brother of Jack Norton - and Marigold "Mari" Smith - one of Dr. Peter Whitney's Orphan Girls from Group One and long lost twin sister of Briony "Bri" Jenkins. 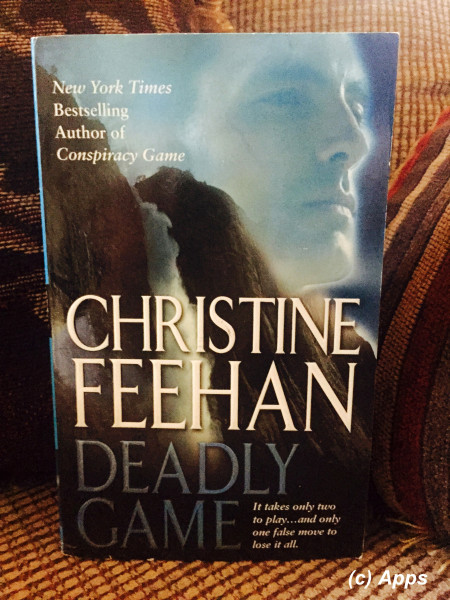 In Shadow Game we had seen that Dr. Lily Whitney-Miller, married to Captain Ryland "King" Miller - head of Team One - find the details of the Orphan Girls that Dr. Peter Whitney had experimented on along with Lily. Now adopted or held in a different lab or on their own, Lily and Ryland are determined to find those girls now women, rescue them and provide a safe haven. So far they have rescued Dahlia Le Blanc, Iris "Flame" Johnson and Briony "Bri" Jenkins.

In the previous book, Conspiracy Game, we had seen that Jack and Ken Norton - twins from GhostWalker Team Two - promise Briony "Bri" Jenkins to find her twin sister - Marigold - who is held in some laboratory by Dr. Peter Whitney for his breeding experiments. This is where this plot begins.

The Norton twins - Jack and Ken - along with few members from GhostWalker Teams One and Two are sent to stop an assassination attempt on Senator Freeman, the one they had rescued from Congo. However, what they encounter is another GhostWalker team who had the same mission but were told the other teams were coming for assassinating the Senator.  In the tug of war the two groups have, Ken injures Marigold "Mari" Smith and captures her.

Every breathe in him tells that she is paired for him, but she is the enemy. To top it, she is the twin sister to his sister-in-law Briony Jenkins, married to Jack. What twisted game was Dr. Whitney playing with them but neither were trusting each other enough nor liking the situation they are put in, while trying to find a way out of this deadly game.

When I read about Ken's torture in the previous book, I wondered whom she would pair him with and how she would be. Marigold turned out to be surprisingly a very strong woman with a very strong spine. And she is his equal in every way. But, it tore me out the way she leaves him despite all the risks he takes to rescue her, it tore me out that she was so vulnerable when it came to matters of her heart, yet so strong when she wanted to protect others including Ken. Christine certainly created a complex character for Ken as much as he was.

In building his character, Christine certainly had all the readers fooled with his "nice and happy go lucky" act. We see in this book, how much more complicated he is, with all his fears and experiences, that he is worse than his brother, Jack. Yet, he is as noble and honorable as Jack and would have never done everything he thought he would do wrong in his relationship with Mari.

This book touched me a lot because of several reasons. Both Ken and Mari had faced tortures at Dr. Whitney's hands that run deep in them. Both come with abilities that no one knows about and some they themselves hadnt known. Then the various tortures the rest of the ghostwalker women endure. The cruel and cold behavior of Dr. Whitney to the ghostwalker women. The enhanced super solders who form Whitney's personal force show no compassion towards these women which wrenched my heart.

The plot is fast-paced with lot of action and emotions, all spun in together. A master story teller as such can only spin as well as Christine Feehan has. Recommend to continue to read the series for the plots, the characters and the web that is all around them.

1) Plot Reveals:
a. Christine thanks her dear friend Cheryl L. Wilson again in this book. She has thanked Cheryl in several of Carpathian books from the Dark Series and also in the Leopard Series. We, as readers, know Cheryl Wilson as C. L. Wilson, and for her famous series Weathermages of Mystral.
b. Senator Ed Freeman, the one the Norton twins tried to rescue and were in turned kidnapped in Congo, is married to Violet Smythe - one of the Orphan Girls from Dr. Whitney's Group in the secret compound. She is also a GhostWalker paired to the Senator. The Senator gets shot in the ensuing battle between his super soldiers and Whitney's during the escape attempt of the orphan girls in the compound. His fate is undecided.
c. Jacob Abrams, a loaded banker, and Senator Freeman's father, Andrew Freeman, are in cohorts with Dr. Whitney, supporting his experiments.
d. Marigold confirms that Dr. Whitney has indeed some kind of psychic ability, which we had seen briefly in the first book, but wasn’t confirmed until this plot by Christine.

c. GhostWalker Team Two, Paramilitary Ghostwalkers Team (Navy SEALs) working with NCIS; first introduced in the second book, Mind Game; under direct command of Rear Admiral Frank Henderson - headed by Logan "Max" Maxwell; Jesse Calhoun; Martin Howard, Neil Campbell; Trace Aikens
i. As of Mind Game plot, Jesse Calhoun suffers immense torture, losing his ability to use his legs from below knees, confined to wheelchair. After getting treated for his torture decides to go back to his home town to run his radio station. In Deadly Game, we see that even with him being on wheelchair, Jesse is back to handling missions for his team in his own way.
ii. Jack Norton, oldest of the Norton Twins. His story is told in Conspiracy Game, and marries Briony "Bri" Jenkins, one of the orphans from Group One, at the end of that book. Bri is pregnant with twins as of that plot.

d. Group One of Dr. Peter Whitney's Orphans: Twelve orphan girls on whom he had conducted his experiments to make them psychically enhanced - Lily Whitney-Miller, the only girl he had adopted for himself; Dahlia Le Blanc; Iris "Flame" Johnson; Briony "Bri" Jenkins; Marigold; Tansy; Jonquille; Laurel; Rose; Camellia "Cami"
i. Ivy, supposedly killed by Dr. Whitney to teach the orphans girls the consequences of trying to defy or escape him.
ii. Rose, Cami and Mari along with two others live in a secret compound that Dr. Whitney has for his own army of super soldiers. Unclear if they were part of the first group of orphans or were they a second group of orphans.
iii. Rose is pregnant with another GhostWalker at the compound, Kane, with whom she is paired with. In their effort to escape from the compound, Rose gets separated from Kane and her sister. A clear segue that a story would soon come up for Rose and Kane. But who is Kane? Which group does he belong to?
iv. In that escape effort, all the remaining four sisters also spread away. Curious to see how Christine will bring them back in.
e. The Fontenot family is introduced in Night Game - Raoul's three brothers (Wyatt, ) and his grandmother, Nonny. Wyatt is shown to have romantic feelings towards the lost and found girl, Joy Chiasson.
f. Dr. Peter Whitney who thought be dead in the first book Shadow Game, is shown to be alive as of this plot with more devious plots in his mind. As the books progress, we see the various kinds of horrific experiments he had done on the GhostWalkers - tracking them with a computer chip in their body; pairing the Orphan girls not only with one of the two Ghostwalker teams, but his personal enhanced team that no one is aware of and those who had never passed the psych evaluation and are cruel as they could come; didn’t matter if the girls liked the men or not but he wanted the men to mate with them to produce super soldier babies. Injecting them with Zenith, a fast-healing medicine but with serious repercussions.

3) Grammatical / Historical / Location / Character Errors:
a. On Pg. 184, line 20, it should be "…you been fraternizing with…"
b. When the GhostWalker Team Two was introduced in Mind Game, Christine had mentioned one of the members as Todd Aikens. But in this book when she mentions the entire team, she names him Trace Aikens. Is he Todd or Trace? Had she named him first as Todd and then later changed it to Trace?
c. On Pg. 267, Line 23, it should be "…that would be a negative…"
Tags: books, critique by amateur, ghostwalker series, reviews
Subscribe