Continuing with the critiques I started in 2015, here is the next in series – a book review.
Prologue: Go here.
For review of all books under Ghostwalker series, Go here.

Mind Game is the second book in the Ghostwalker series by Christine Feehan and published in August of 2004. Ghostwalkers are a group of women and men who are sent on special missions. They have psychic abilities, physical abilities (both enhanced genetically and natural) and some abilities more rare than others. However every Ghostwalker would need an "anchor" to draw back the psychic backlash from other ghostwalkers, especially that would instigate violence. As the series proceeds we get introduced to four teams of Ghostwalkers each enhanced in more ways than one can think.

This plot revolves around Nicolas "Nico" Trevane - one of the Ghostwalkers from Team One headed by Ryland "King" Miller - and Dahlia Le Blanc - one of the orphans from Group One that Dr. Peter Whitney had experimented on. It is set in Louisiana bayous. 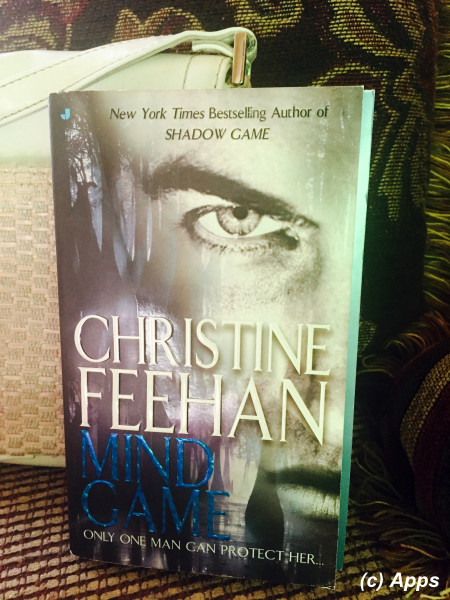 Shadow Game left us off at a juncture where Dr. Lily Whitney-Miller and Captain Ryland Miller find the video tapes of several other girls that her father Dr. Peter Whitney had experimented on long before the Team One of Ryland Miller came on. And they were also unsure if Team One was the only team that Dr. Whitney was involved in. To add to the blow Lily finds out that Dr. Whitney was not her biological father and she didn’t have a clue of her birth of where she came from. Whitney had taken orphans from around the world who had psychic capabilities for his experiments. And when they failed, or more importantly an incident with Lily made him decide to disband his experiment, relocate the girls elsewhere but adopt Lily as his own. Now Lily takes upon the task to find these girls, provide for in terms of money and shelter and also give them support to control their abilities.

With much search she finds one called Dahlia Le Blanc in a private sanitarium in Louisiana run by the Sisters of Mercy but owned by Whitney's Trust. Nicolas "Nico" Trevane takes upon himself to find her and bring her back to safe haven in Lily's mansion. Dahlia possesses an extraordinary telekinetic gift among other gifts that Dr. Whitney enhances it to the fullest. She was the fire with her emotional imbalances to Nico's ice. Despite the fears that Lily has for Nico with his flat and cold eyes, she had no choice but to comply with them. Nico sets on his search but lands into far more bigger trouble than he imagined. Someone is after Dahlia to terminate her and he has no clue who that is. And neither does Dahlia. But she has to trust Nico to help her get out. Thus the plot begins.

With the trust gradually building between them, the heat of attraction builds. Lily had feared that Nico would be unemotional. However, in the book we see how slowly inch by inch Dahlia melts away Nico's ice and stamps herself permanently in his heart. He clearly falls for her and willing to give his life for her safety and to keep his promise to Lily. No two characters have been better suited than these two in this book. However, they do have to overcome the secrets that they hold hidden with each other and fight as one with the unknown enemy before to reach safety of Lily's home.

Christine Feehan introduces The GhostWalker Creed, a sort of promise and prayer combined together, with this book.. 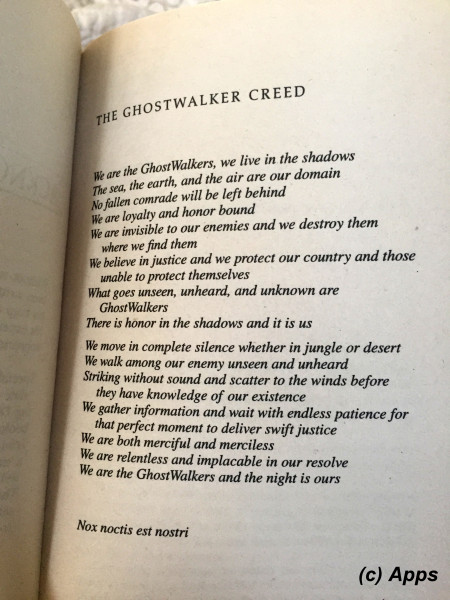 Another fun read by Christine and I was left on the edge of my sofa (precisely) watching these two travel through dangers and survive. I hope you will enjoy it the same way I enjoyed.

Spoiler Alerts:
1) Plot Reveals:
a. Nico Trevane and Dahlia Le Blanc take shelter in one of Raoul Fontenot's homes in the bayou when they are escaping from the antagonists. In their love making, due to the amount of energy that they both dispense and how it gets manipulated, they single the windows and walls on the room they are in.
b. The second Ghostwalker's team are Navy Seals and belong to NCIS. The first time around when I read these books, I didn’t give it much thought. But now that I am reading a second time, I realize that they belong to an organization, based on which there are three TV shows - NCIS, NCIS - Los Angeles and NCIS - New Orleans. I had a review of Season 13 of NCIS though, when that show reached to a crux.
2) Sub-Plots:
a. GhostWalkers have their own doctor who takes care of them as well as keeps them safe from the outside threats and politics - Dr. Brandon Adams
b. GhostWalker Team One, special forces team comprised of Army Rangers and Army Green Berets; first introduced in the first book, Shadow Game - under direct command of General Theodore Ranier
i. Headed by Captain Ryland "King" Miller, can walk in dreams and also psychically link his team. His story was told in Shadow Game, and he marries Lily Whitney, adopted daughter of Dr. Peter Whitney, at the end of that book.
ii. The other team members consists of Kaden, his second-in-command and also an anchor; Raoul "Gator" Fontenant can control animals; Sam Johnson can move objects; Jeff Hollister can walk in dreams, move things and levitate; Ian McGillicuddy can sense danger coming; Tucker Addison; Nicolas "Nico" Trevane can walk in dreams and is an anchor; Jonas Harper; Kyle Forbes
c. GhostWalker Team Two, comprising of Navy SEALS working with NCIS; first introduced in this book; under direct command of Rear Admiral Frank Henderson - headed by Logan "Max" Maxwell; Jesse Calhoun; Todd Aikens; Martin Howard, Neil Campbell; Jack Norton; Ken Norton
i. As of this plot, Jesse Calhoun after getting treated for his torture decides to go back to his home town to run his radio station.
d. Group One of Dr. Peter Whitney's Orphans: Twelve orphan girls on whom he had conducted his experiments to make them psychically enhanced - Lily Whitney-Miller, the only girl he had adopted for himself; Iris "Flame"; Dahlia Le Blanc; Tansy; Jonquille; Laurel; Rose
3) Grammatical / Historical / Location / Character Errors:
a. On Pg. 231, Line 8 from bottom, it should be "..You have given…"
b. On Pg. 320, Line 19, it perhaps should be "…was Lily who sent along…"
Tags: books, critique by amateur, ghostwalker series, reviews
Subscribe