Shadow Game is the first book in the Ghostwalker Series by Christine Feehan published in August 2003. When I saw the movie X-Men Origins: Wolverine (re-run on the TV sometime in 2011), it spiked my interest in super-soldiers and genetically engineered humans. I was already reading Christine Feehan's The Carpathian Series. Incidentally she has written quite a few novels on super-soldiers too. And that's how I ended up reading this series. 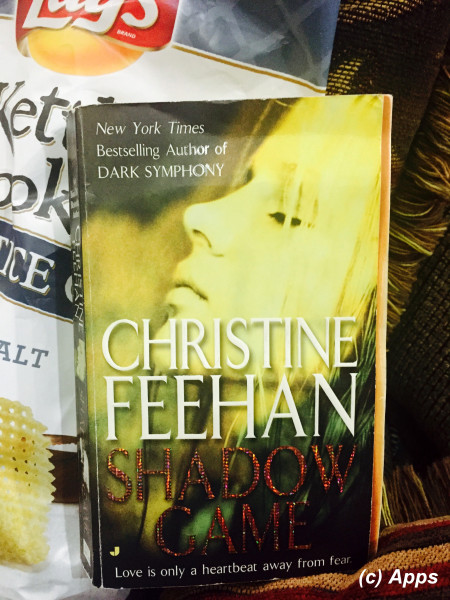 Ghostwalkers are a group of women and men who are sent on special missions. They have psychic abilities, physical abilities (both enhanced genetically and natural) and some abilities more rare than others. However every Ghostwalker would need an "anchor" to draw back the psychic backlash from other ghostwalkers, especially that would instigate violence. As the series proceeds we get introduced to four teams of Ghostwalkers each enhanced in more ways than one can think. The imagination of the author in bringing on new abilities injected to these super-soldiers is amazing. In the first book, Shadow Game, we get introduced to Team One and the pairing between Captain Ryland Miller and Lily Whitney. It is set in San Francisco, CA

Dr. Peter Whitney successfully enhances the psychic abilities of a group of men working for the Special Forces. However there are problems with their enhanced abilities especially being unable to block the psychic overload around them. Captain Ryland Miller heads this team and feels himself responsible for any success or disaster of his men. He had made the decision and his men had followed into this experimental nightmare. As the experiment progresses and Dr. Whitney fails to stop mishaps (some men lose their lives), he brings in his daughter Dr. Lily Whitney for help.

The instant attraction that she feels for Captain Miller is above charts which confuses her a lot. However she also feels Miller's hate towards her father which she doesn’t understand. However she eventually learns that Dr. Whitney had separated he men from anchors and might have murdered the ones that were failures. And he suspects he would be the next. She also notices that there is open animosity between her father and Colonel Frank Higgens, Miller’s immediate commanding officer. That night when her father misses the dinner date with her, she takes it as a normal thing as it had happened several times before. However although being having no psychic abilities he somehow contacts her right before he dies or she thinks him dying. Before she feels him being dumped into the ocean he tasks her to help Ryland Miller and his team and also find "the others". She is left at a loss for words and emotions before she realizes that someone at the Donovan's (the company for which Dr. Whitney and Lily worked for) could be the one murdered her father.

After getting her emotions and feelings gathered she confronts Ryland Miller as to why he had come in between and broke the contact with her father. She learns lot more about the situation his team is in during the time. As promise to her father and honoring his dying wish she opens up her home for Miller's team. Fearing that they will be killed, she helps them escape the facility and into her huge home. She helps the men by teaching them techniques and exercises to rebuild their mental barriers. In parallel she also tries to find who has killed her father with help of Ryland Miller. But there were still so many pieces of puzzles to be solved. Who were "the others" that her father spoke of in his dying wish?  Can she find them? And if she found them what will she do with them? How could she even begin to look for them? What happened in the experiments that killed Miller's men? Will the remaining men survive and be able to live in the outside world by themselves? Who killed her father? Was Colonel Frank Higgens responsible for it? Or someone higher than him are behind all this? And to add to all of this she could not understand if the tremendous attraction she has towards Ryland Miller, is it true or has been enhanced thru pheromones injected between them?

Certainly a complicated plot with complex characters involved. I cannot deny that there is definite eroticism in the book as a parallel plot between the lead character along with the main story going along. However I do have to tell that I fell for the actual plot rather than the eroticism for me to continue on with this book as well as the series. As always there are some repeat paragraphs through the book where the author writes again and again about a character, but that's how her books are written so they are there - You can skip them or read on.

All in all another series to definitely read and know about the generic experiments that are done (most of them secretly) through these stories, know the people and watch their fight to live normal closer.

Spoiler Alerts:
1) Plot Reveals:
a. Christine thanks her dear friend Cheryl L. Wilson in this book. She has thanked Cheryl in several of Carpathian books from the Dark series and also in the Leopard series. We, as readers, know Cheryl Wilson as C. L. Wilson, and for her famous series Weathermages of Mystral.
b.  Dr. Lily Whitney, Ryland's mate, is an anchor and has ability to calm the bombardment of emotions and feelings into the brains of psychic men around her. Dr. Peter Whitney maps Lily and Ryland through genetics and enhanced pheromones.
c. Lily Whitney's family consists of her father, Dr. Peter Whitney; housekeeper and her caretaker, Rosa Cabreros; her chauffer, John Brimslow; her security expert, Arly Baker.
2) Sub-Plots:
a. GhostWalkers have their own doctor who takes care of them as well as keeps them safe from the outside threats and politics - Dr. Brandon Adams
b. GhostWalkers Team One, special forces team comprised of Army Rangers and Army Green Berets - under direct command of General Theodore Ranier; headed by Captain Ryland "King" Miller, can walk in dreams and also psychically link his team. The other team members consists of Kaden, his second-in-command and also an anchor; Raoul "Gator" Fontenant can control animals; Sam Johnson can move objects; Jeff Hollister can walk in dreams, move things and levitate; Ian McGillicuddy can sense danger coming; Tucker Addison; Nicolas "Nico" Trevane can walk in dreams and is an anchor; Jonas Harper; Kyle Forbes
c. Group One of Dr. Peter Whitney's Orphans : Eleven orphan girls on whom he had conducted his experiments to make them psychically enhanced, along with Lily - the only girl he had adopted for himself.
3) Grammatical / Historical / Location / Character Errors:
a. On Pg. 214, Line 11, it should be "…office, someone were watching…"
b. On Pg. 230, Line 18, "Lily" is mis-spelled.
c. On Pg. 243, Line 20, it should be "..Why did he always…"
d. On Pg. 268, Line 15, it should be "Her breath was…"
Tags: books, critique by amateur, ghostwalker series, reviews
Subscribe