Stars: 3.5 / 5
Recommendation: An excellent work that revolves around the basic emotion between two people - believe.

At First Sight was the sequel to True Believer published in 2005 and written by Nicholas Sparks. The story here begins a few months after where True Believer ends. Plot opens with Jeremy Marsh and Lexie Darnell getting ready to have Jeremy move from New York to Boone Creek, North Carolina. We know that in the conclusion of True Believer, Lexie tells Jeremy that she is pregnant and it would be a girl per Doris (she is the resident psychic). But they don’t share with anyone except Jeremy's friend Alvin and Lexie's grandmother Doris. 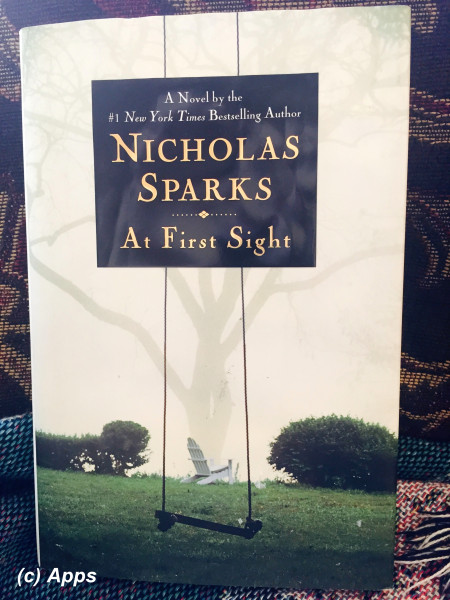 Now back in Boone Creek, Jeremy comes across a writer's block while the stress around him builds up - setting up a new house; keeping the baby a secret, planning for wedding, and above all the friendship between Lexie and Rodney. If you remember Rodney from the prequel, he is the deputy sheriff and had wanted Lexie for a long time until Jeremy came along. In this plot, Rodney is in relationship with Rachel, Lexie's longtime friend but have trouble. To add to all this, Jeremy receives an anonymous email with just a line "how do you know the baby is yours?" Already stressed Jeremy fights with Lexie over this. In the meanwhile Rachel goes away without telling anyone leaving Lexie supporting Rodney as a friend more and more. Much to the frustration of Jeremy, a follow-up email arrives a few days later that says "Hasn't she told you the truth? Read Doris's journal. You'll find the answer there."  Given the fact that Jeremy had got divorced because of his inability to have children, these emails cause more suspicion in his mind. This time around when Jeremy confronts Lexie they end up in a bitter fight and he leaves Boone Creek to New York albeit to attend his bachelor party.

Will Jeremy come back? What is the truth in Doris's book? Who is sending those emails? Will the problems between Rachel and Rodney clear or will they cause more rift between Lexie and Jeremy? What about the baby? Is she really his? What is the fate of Jeremy and Lexie? Will Jeremy get over his writer's block? Do read to know the answers.

I must say that this was a heart-wrenching book. So much grief and so much sad happens with brief glimpses of happiness that this book left me with a heavy heart than his other books. Typical of his writing style that someone has to die in the end, here also someone dies. But not necessarily I have to agree with the writer on the ending. I would have loved it to be a much more happier ending. However, his title says it all - At First Sight do you believe everything you see or have patience to believe others to give you the sight. That is the crux of the plot so it perhaps makes sense with the ending.

All in all a good book pursuing that very basic human emotion.
Tags: books, critique by amateur, reviews
Subscribe