Stars: 3.5 / 5
Recommendation: A good book for all critics out there who look for proof for everything

True Believer was written by Nicholas Sparks and published in April 2005. This was the first book of his that I had ever read. An accidental pick up book I must say that put me on track to read some of his books (7 in total I have read so far). Initially when I had started this book I clearly remember trying to connect to the author's style, the plot, the characters and the setting; and some chapters I was bored. But as I plowed through the book, somewhere in the middle everything started falling into place. All of a sudden it just clicked to me. And there after this book and six others I have thoroughly enjoyed reading. Here is my take on this book. 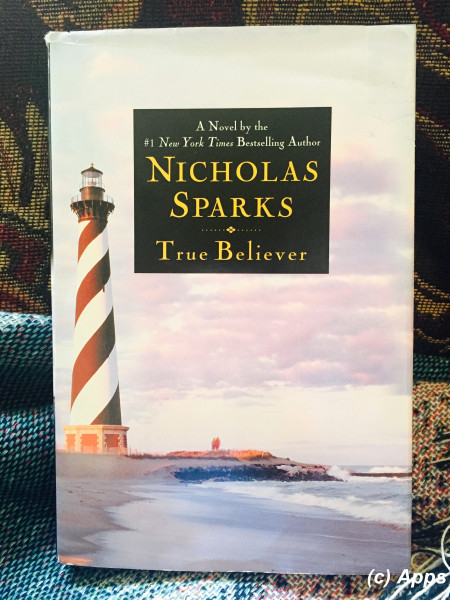 Jeremy Marsh, a debunker on the supernatural, was from New York; 37-year old handsome, divorced and part of media elite, living and breathing New York. He also had his own fame on National Television. So what was he doing in Boone Creek, North Carolina? That's exactly what Lexie Darnell thought about him when had first arrived in the town. Jeremy had come to Boone Creek to investigate the ghostly lights that appear in the town cemetery but only on certain moon phases. Lexie runs the town library and was left orphan when her mother was killed in an accident. She has her grandmother Doris McClellan to take care of. Doris was the one who had invited Jeremy to investigate.

Jeremy, being a natural debunker, had his reservations on the truth about ghost lights but couldn’t resist from coming. However, meeting Lexie, spikes his interest further towards her. Lexie however stays guarded of him, even though she agrees to be his tour guide. Jeremy expected this to be a quick work and head back to New York. But Lexie had changed his plans and thoughts. Through trepidation and hesitation, both Lexie and Jeremy grow closer to each other and eventually start falling in love. But Lexie knows that Jeremy is an outsider and wouldn’t stay while her future is with Boone Creek.

Will Jeremy crack the secret behind the ghost lights? Will the media be exposed to it? Will Jeremy go back to New York or stay? Will Lexie go with him or stay in Boone Creek as she wanted to? Will they over come their skepticism about love and heart, give-in to their feelings? Well, needless to say you have to read it to know.

As I said, it started off a bit rocky for me, but once I got into it I loved the book. Hope you enjoy too.
Tags: books, critique by amateur, reviews
Subscribe