Stars: 5 / 5
My Recommendation: A perfect Valentine's Day gift for that one love in your life. Or simply for that lazy day when you want to just cuddle up and watch something magical and beautiful at the same time.

An Affair to Remember is a 1957 American classic starring Cary Grant as Nicolò (Nickie) Ferrante and Deborah Kerr as Terry McKay. It was a remake of the 1939 hit film Love Affair starring Irene Dunne and Charles Boyer. Incidentally both movies have been written and directed by Leo McCarey. And both movies are the first and original remake to win an Oscar nomination for Best Song.

Although An Affair to Remember was nominated for four Oscars ( Best Cinematography, Best Costume Design, Best Original Song and Best Original Score) but walked away with none. An apt movie for my post marking the Valentine's Day in my review blog for this year.

I first remember hearing about this movie when I was watching the 1993 hit American movie Sleepless in Seattle on TV (rerun of the movie obviously since I watched it sometime in 2008). This movie is referenced more than once and in one particular scene where Sam Baldwin's (portrayed by Tom Hanks) sister Suzy connects the situation between Sam and Annie Reed (portrayed by Meg Ryan) to this movie. Sleepless in Seattle was inspired by this movie which would be for another post for another day. For now, here is the clip I was talking about above.

As Suzy describes the movie I remembered watching a similar one in Hindi long time ago (back when I was living in India still). A little Google search brought me from Sleepless in Seattle to Mann ( = Heart) (the 1999 hit Hindi film which was remake of An Affair to Remember. I had mentioned about that movie here: inspirethoughts.livejournal.com/88868.html) to Ravoi Chandamama ( = Please come dear moon) (the 1999 Telugu film which was a remake of Hindi version Mann and an unsuccessful one) to the original classic from 1957.

The moment I watched the original I fell in love with it.  The dialogue "And all I could say was, "hello"." stuck to my heart. There is a fathoms of depth filled with millions of words in just that few words. I have watched it so many times that I cant count that anymore.

Cary Grant and Deborah Kerr were perfectly complementing to each other in these roles. There could be no other who could have blended into their roles so comfortably. So does Cathleen Nesbitt slides well into the role of Grandmother Janou. Deborah Kerr's wardrobe in the movie is killing. I would love to get some of those made now, especially the orange drapery valance one at the beginning of the movie. Absolutely stunning! 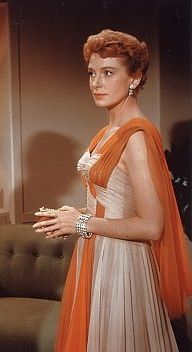 Nickie engaged to the very rich Lois Clark and Terry engaged to Kenneth Bradley. They meet aboard the Transatlantic ocean liner SS Constitution enroute from Europe to New York. Their friendship blossoms to love by the time they land in New York. Since they are engaged to other people, they decide to stay apart for six months on top of Empire State Building if they have ended their relationships and started new careers. This is the very heart of the movie that defines it completely.

The scene where Nickie and Terry show to each other their fiancées with gestures although the length of the passengers between them watch it like a ball game is so very cute. Not a single word spoken but everything conveyed on how each of them thing their chosen partners are so wrong for them even as they realize it themselves.

Another funny scene is when Nickie's manager shouts from the ground below that he sold one of his women for $200 while Nickie was up the scaffolding painting a billboard. Passers-by think they were dealing with real humans. Nickie continues to paint and Terry continues to sing and earn their keeps whilst waiting for the six months to pass by. The iconic scene that would have been on top of the Empire State at that moment fails to happen and leads to the rest of the story. Even though the iconic scene on the Empire State Building doesn’t happen but the final scene is simply the icing on this cake. Oh how can one forget Nickie smirking at Terry and saying "There must be something between us, even if it's only an ocean". How can one forget "If you can paint, I can walk... Anything can happen, don't you think?"? **Sigh**

Terry: And where is he all this time?
Nickie: Waiting Anyways, a perfect movie for those in love and for those who want to fall in love. Here's the French version of the title song An Affair to Remember (I couldn’t find the English version that was sung by Deborah during the movie).

PS: I have yet to watch the 1939 original Love Affair that started all this obsession, love and emotion towards this movie.
Tags: critique by amateur, movies, reviews, romance
Subscribe