Continuing with the critiques I started in 2015, here is the next in series – a book review.
Prologue: Go here.
For Review of all books in this series: Go here.
Stars: 4 / 5
Recommendation: Yes go for it for you will be left not knowing what happened to the delicious Cian.

Valley of Silence is the third and final instalment of the The Circle Trilogy written by Nora Roberts and published in 2006. I had written the reviews for the first two books a year ago which can be found at the above links. Although had read the third book a long time ago, I finally got around to write the review now. Hope that you will find it interesting to pick up the book. 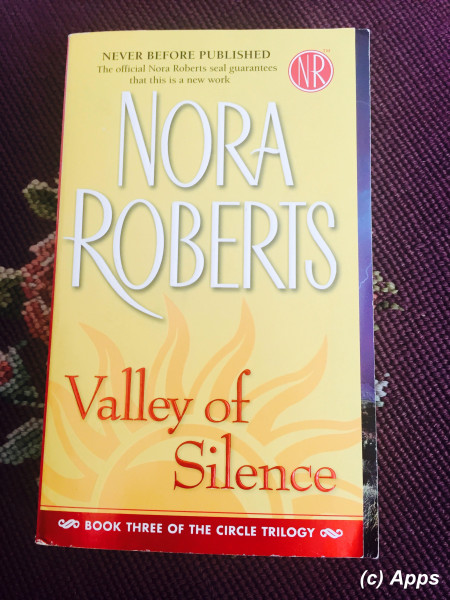 In Morrigan's Cross (Book I) we got introduced to the crew of six people from various times, worlds and skills to fight against the ancient Vampire Queen, Lilith – A 12th Century Sorcerer, Hoyt Mac Cionaoith (McKenna), the first of whom the Goddess recruits and transferred to 21st century thru a portal. The Witch, Glenna Ward, from the 21st century on this world. The Scholar, Moira, Princess of Geall from the 21st century another world. The Shape-Shifter, Larkin, brother-kin to Moira from Geall, again 21stcentury another world. The Warrior, Blair Nola Bridgit Murphy, a demon-hunter from 21st century on this world. And finally, the Vampire, Cian (Cain) Mac Cionaoith (McKenna), Hoyt’s twin-brother who was turned to a vampire in 12th century but now resides in New York city in 21stcentury on this world. The Time of Testing has passed and the crew learn friendship and love (Glenna and Hoyt fall in love with each other and get married) along with the key behind them being brought together.

In Dance of the Goods (Book II), prepare for war taking them to the second month, The Time of Learning. They forge a bond, become a unit and travel to Geall where the final showdown would happen. Even the Vampire - Cian - gets entry into the Valley of Geall through the portal further more cementing that he is indeed needed to fight Lilith. Again love is found between Larkin and Blair. My original opinion was very less for this book of the trilogy but in retrospective I believe that Blair's strong personality complemented Larkin's tenacious and yet soft nature perfectly.

Now the final month of preparation, The Time of Knowing has come. It’s the time for the six of them use their head and heart together, know everything they can they have to do even at the cost of their personal sacrifices, know that without that Lilith will be undefeated. Just as the six had come through the portal with their weapons and elements, so also did Lilith got through the portal with her minions and vampires. How she could get through even being a Vampire Queen could not only attest to the amount of power and magic she wielded but also that she has a powerful sorcerer in cohorts with her. Who could that be? Another item for the six to know. Most times the knowing comes to them with a shield to protect or a sword to shred the vampires. But sometimes knowing comes with a slice of knife too just like when Moira finds out that not only her mother but her father who was killed by Lilith's vampires years ago when she was just a child.

The book opens with Moira going through the ritual of pulling free the sword from its stone scabbard. If she was a true Queen of Geall she would be able pull the sword out and be crowned the queen. The base of the scabbard had inscription thus:

In every sense Moira made a queen that day when she pulled the sword out and the symbol of claddaugh forms on her arm. And no wonder Cian's unbeating heart fell for her - slender and slight but magnificent as any Amazon warrior; regal, fierce and suddenly beautiful with brilliant eyes. And it was time for Moira to know what she would be doing as a queen and also know for herself as a woman and a heart calling to the unbeating one.

Cian, the most complex character of all the six, falls for the dove fray eyed Queen Moira.  Complex definitely since he was human before he was turned a vampire; a sorcerer before he became an entrepreneur; a warrior before he became a lover - filled with pride that he would not bow to Lilith;  loyalty that he has towards his brother Cian; kinship he had towards King and Larkin; brotherly love towards Glenna and Blair; courage to stand against the one that made him; brave to stand with the six even though he knew many feared and love towards only one. Complex indeed.

As a Queen, the first and foremost responsibility for Moira would be to defend her world against Lilith and save her world and other worlds alike with help of her five warriors. With reluctant but complete support from her uncle Riddick and his family, her soldiers like Tynan and her people she forms an army to move forward; a strategy in place to the face the Vampire Queen. In the midst of this Cian and Moira reach out to each other to grasp at the love they have in the event they don’t make it out of the war. This was the knowing for both of them too.

Now, how they will fight Lilith, what more steps they will take? What about the loss they face? The hurt and pain? The consequences and decisions? All this molded into an intricate plot by Nora Roberts finally culminating at the Valley of Silence. I will say no more and urge you to pick up the book to read and know for yourselves the rest of the tale. Happy Reading!!
Tags: books, circle trilogy, critique by amateur, reviews
Subscribe