The fifth and final instalment in the series Percy Jackson & The Olympians is titled The Last Olympian published in 2009. Rick Riordan concludes the adventures of sixteen year old demi-go Percy Jackson (son of mortal woman and Greek god Poseidon) with this book in which he leads his friends to defend Mount Olympus. This book also reveals the Great Prophecy that everyone feared would come true and cause a war between the three gods Zeus, Poseidon and Hades (also known as The Big Three). 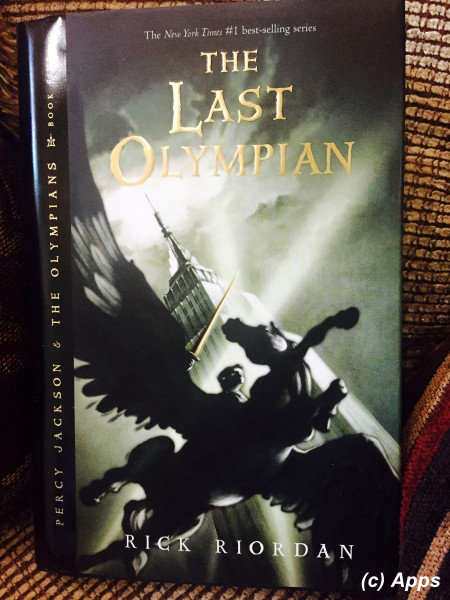 And here is the Great Prophecy:

A Half-Blood of the eldest gods,
Shall reach sixteen against all odds,
And see the world in endless sleep.
The hero's soul, cursed blade shall reap,
A single choice shall end his days,
Olympus to preserve or raze

Very obvious with the prophecy that the Mount Olympus is the primary stage here and no question there about who the half-blood of the eldest gods would be. It's Percy and no other. However one wonders who is the hero whose soul is reaped.  Well to know that we need to go to the beginning of the plot in this book. It opens with Charles Beckendorf (a demi-god and son of mortal woman and Greek god Hephaestus, a master smith) informing Percy and Rachel Dare to enact their surprise attack on The Princess Andromeda. While Poseidon's underwater palace is under siege by the Titan Oceanus. The half-bloods also come to know that they have a spy in the camp who was giving the information to Luke - whose body is now the host to Kronos, the youngest of the Titans. In all the midst of this Percy is confused with his feelings towards Annabeth. And Ares and Apollo cabins half-bloods are at war with each other.

With so much going on around him, unable to take the emotional hit, Percy decides to leave the Camp with Nico (a demi-god and son of mortal woman and Greek god Hades) to understand how to defeat Kronos / Luke. Nico had revealed at the end of The Battle of Labyrinth that he knows how to kill Kronos / Luke forever. In the journey he bathes through the River Styx to come out invincible except for one spot even though Nico tries to betray him for a little while. Percy comes out of the Underworld in New York City and sends Nico back to convince his father Hades to fight against Kronos. Will Nico be successful? Time only will tell.

In New York City, Percy calls all his campers (Ares cabin half-bloods don’t join initially due to their war with Apollo cabin half-bloods but eventually join forces) to prepare for the battle. But the gods refuse to help them defend Olympus much to the shock of the half-bloods. Now all falls on their shoulders to not only save Mount Olympus but also defeat Kronos / Luke and save the earth from a much much bigger war. What follows is a strategy that Percy sometimes tries to make it up on the fly and other times with aid of his friends moves forward in the battle closing in on Kronos / Luke.  Follow this final adventure through the steps and eyes of these brave half-bloods. Know what key role Rachel Dare would play in here, whats the relationship between Luke and Annabeth, how they save the humans from the battle, who all ally with Percy Jackson in the fight, watch their stand-down with the Titans Prometheus and Hyperion, and despite the losses at their end how they endure the battle. In parallel to this fight the gods on Mount Olympus are having their own battle with the ancient and terrible monster Typhon.  Everyone in the end learns that all this battle could have been avoided if the gods had simply claimed their half-bloods and given them as well as the minor gods the respect they needed.

Rick has brought everything to life with this tale and the previous books. Some moments and situations it was definitely difficult to imagine while reading yet they were so capturing that once cannot put down the book for want of imagination. A successful series completed with this book and concluding the journey of Percy Jackson.

Or so we thought until Rachel who becomes the new Oracle reveals the next Prophecy:

Seven half-bloods shall answer the call.
To storm or fire, the world must fall.
An oath to keep with the final breath,
And foes bear arms to the Doors of Death.

And Rick continues the journey of Percy Jackson and Annabeth Chase with the book The Lost Hero in the Heroes of Olympus series. Now we just have to read the series to know who the seven half-bloods would be and what entails them in this journey.
Tags: books, critique by amateur, percy jackson the olympians, reviews
Subscribe