The Battle of the Labyrinth is the fourth instalment in the Percy Jackson & The Olympians series by Rick Riordan which was published in 2008. In this book the demi-god Percy Jackson (son of mortal woman and Greek god Poseidon) is fifteen-years old and his adventure starts in the high school he joins as a freshman. As always his friends Annabeth Chase (a demi-god - daughter of mortal man and Greek goddess Athena), Grover Underwood - a satyr and Tyson - Percy's half-brother and a Cyclops. 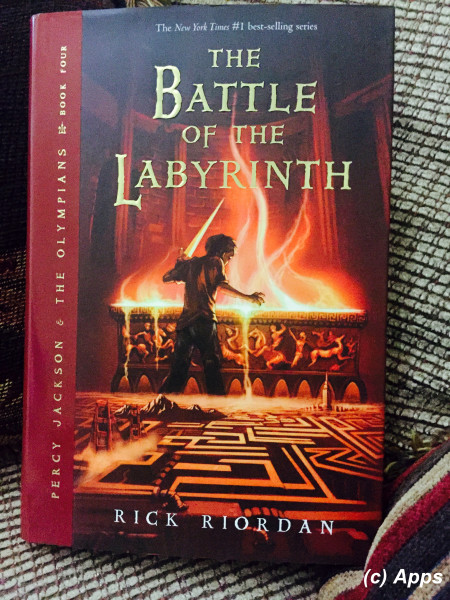 At the school orientation Percy and his friend Rachel Elizabeth Dare who can see through the Mist (an illusion that demi-gods create around them when they are facing battles and monsters or doing things that a human being would not consider normal) are attacked by two Empousai - Greek monsters controlled by Hecate. They fight the Empousai but in the process set fire to the school causing Percy to flee back to Camp Half-Blood.  Things are not as smooth at the Camp either. Annabeth is upset with him that he had befriended a mortal. Grover is in trouble with the Council of Cloven Elders as he is unable to provide proof of Pan - Greek god of wild, shepherds and flocks - that he had felt in the previous instalment, The Titan's Curse. Annabeth is also working on a secret project with Clarisse. New sword instructor is added to the Camp called Quintus - who no one knows where he was from or what he is.

Troubles seem to not end yet for Percy. During a competition at the Camp, Annabeth and Percy discover the entrance to The Labyrinth - An elaborate structure from Greek Mythology that was supposed to be designed and built by the legendary artificer Daedalus for King Minos of Crete at Knossos. Annabeth and Clarisse mention to the Camp Council of War that they suspect that Luke (a demi-god and son of mortal woman and Greek god Hermes) will use that entrance to attack the Camp and will use Princess Ariadne's magical string that was assumed to be in possession of the inventor Daedalus (who built the Labyrinth in the first place).  Shortly after the Prophecy is spoken by The Oracle and given to Annabeth. Here how the Prophecy goes:

You shall delve in the darkness of the endless maze,
The dead, the traitor, and the lost one raise.
You shall rise or fall by the ghost king's hand,
The Child of Athena's final stand.
Destroy with a hero's final breath,
And lose a love to worse than death

Thus begins the journey again for the young heroic demi-gods. Despite the warning Chiron gives that three is the traditional number for a quest, Annabeth insists on making it a four-member team by including Tyson, Percy and Grover with her.  The same night Percy also receives a message from Nico (a demi-god and son of mortal woman and Greek god Hades) that he will bring back his sister by exchanging her soul with one who cheated death. The following morning the four demi-gods descend into the Labyrinth per the prophecy to face Luke and any other hurdles or monsters in store for them.

Rick has very intricately wove this plot as before connecting all the strings at the right place. Never once I got lost in the book just like the questers who couldn’t or rather refused to lose in the Labyrinth. The questers come across Hera - wife of one of the three sisters of Greek god Zeus, monster Kampe - a fearsome she-dragon - and her captive Briares - one of Tyson's personal heroes, escape the telkhine from the forge of Hephestus, Calypso - daughter of Titan Atlas who is cursed The Fates to fall-in love with the heroes that crash land in her island, face another Greek god Antaeus - son of Poseidon and Gaia and other Greek gods and monsters. All along the search for Pan continues in parallel. Rachel Date joins their  quest too aiding them.

Who would be the traitor per the prophecy? What about the Ghost Kind? Annabeth fears that she would lose Percy to death per Prophecy's last line. Whom do they lose? Does Percy face Nico to defend his soul from being traded for Nico's sister's soul? Will Grover find Pan? Who is Pam in reality? Will they endure the battle at the Camp with the flood of monsters coming thru the Labyrinth and defeat them?

Tale so well spun where the demi-gods are stuck between the Titans and Greek gods war, one wants to rush to the next and final instalment to see the fates of all the demi-gods and the gods. But, don’t rush yourself. Go through the adventure, be with Percy and his questers, one step at a time and I promise you it will just be much more  sweeter in the end.
Tags: books, critique by amateur, percy jackson the olympians, reviews
Subscribe