Philip Pullman released the final instalment of His Dark Materials series, The Amber Spyglass, in 2000. In the second part we are left at the point where Lyra goes missing and Will refuses to go with the angels, Balthamos and Baruch, until he found her. Now what has happened to Lyra?  And that’s where this book begins. 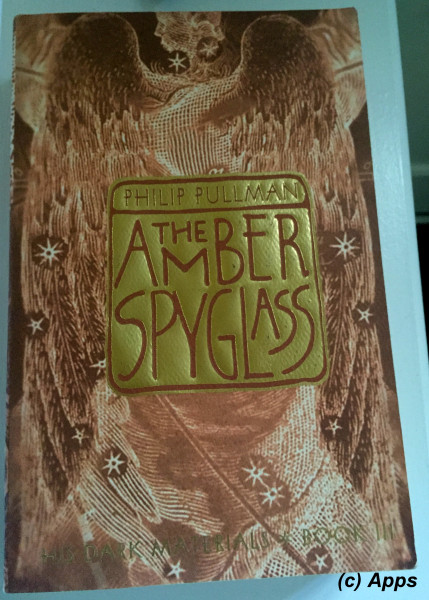 Lyra is kept  hidden in a cave by Mrs. Coulter from the Magisterium so they wouldn’t kill her. Lyra is prophesied to become the second Eve and bringing the Fall of Man. In the meanwhile when Will is being taken to Lord Asriel by the angels they are attacked by the soldier of archangel Metatron. Will uses the knife to escape to another world.

Dr. Mary Malone, introduced as the "serpent" in the previous book, is followed by an assassin appointed by the Magisterium. However she enters a different world through a window where she meets elephantine creatures called Mulefa. Here she constructs a Spy Glass to study the Dust that no longer nourish the seedpod trees and the trees are dying.

Will forms an army with Iorek Byrnison, Lord Asriel, and the angel Balthamos to reach the cave where Lyra is kept drugged and hidden. Magisterium forces also converge at the same time. Will wakes up Lyra but loses concentration when he sees Mrs. Coulter and breaks the knife. Lyra, Will and two spies , Tialys and Salmakia - escape to the world of dead, opened by the knife before it was broken.

What is the purpose of Lyra to go into this realm? Will they all return back? What is the result of the war with Magisterium? Why is Magisterium so afraid of the prophecy? Is it really the Fall of Man? Yes, another twisted plot that leads to the beginning of man and woman, that is well spun.

Although I would have liked to have a little lesser twists in this book. Also the journey thru the dead realm could have been avoided as it really did not join to any thread in the plot. Other than that, certainly worth reading to finish the series.
Tags: books, critique by amateur, his dark materials, reviews
Subscribe