Introduction of the Murdoch Mysteries series in my words, go here.
For Review of all seasons in this series: Go here.
Stars: 4 / 5
My Recommendation: A must watch

And here is my take on Season VII of this series - some of the unique stuff from the episodes with pictures for more effect.

Episode 1: The maiden voyage of a tycoon's ship on Lake Ontario comes with more than a murder as a surprise for Detective Murdoch. The ship comes with its own Wireless Telegraph. Constable Crabtree cannot understand why Constable Higgins isnt awed at this technology that uses electromagnetic waves to send messages instead of wires. And they end up debating if it is good for everyone to know what you want to say. Inadvertently they land into the word Tweeting and Twittering - Hey they are talking about Twitter, Facebook and many other social media apps. :) Another time-activated bomb is used in this case. Dr. Ogden uses mouth - to - mouth resuscitation to revive Detective from a drowning - at that period of time a technique employed by Swiss doctors to resuscitate babies. This episode reflects so close to the sinking of The Titanic.

Episode 2: This episode deals with bike race and sports politics. Murdoch adds something called Sprockets to his bicycle that allow him to change gears without dismounting the bike while Crabtree wanted him to try a new sports drink that boost energy. They also keep interchanging the words cyclist with wheelman. Dr. Ogden and Dr. Grace perform a successful extraction of brain of the murder victim. Crabtree mistakes a make-shift icebox to be a safe. Also the manager of the bicycle team uses a method where he drains the players' blood before the race, train them hard with less blood and right before the race starts re-pumps them back their blood into their body. He believes this brings more endurance to the players. Wonder what this method is called now and if the current sports teams even use this method! Dr. Karl Landsteiner's discovery of three blood types in human body (A, B and C) becomes a key portion of the evidence for the Detective to solve the case. And Dr. Grace finds a fourth blood type that she calls AB but Murdoch and Crabtree suggest her to change it to D. (Wonder if in history a certain Dr. Grace really discovered the fourth blood type!). Episode 3: This episode revolves around motion picture and movie making world. One of the invention that James Pendrick - a recurring character as an inventor - are a pair of headphones used to listen to the sounds produced in the movie - a sound synchronization system as he calls it. Thomas Edison appears in the episode - and of course he has to become a suspect :P - who has actually come to charge Pendrick of thieving his patents. And surprisingly Edison is against having sound in a moving picture. Pendrick comments that "Moving pictures are this century's predominant form of entertainment I'm willing to bet on it for young and old." to which Murdoch disagrees not only to that but also to the new concept Pendrick is using in his movies - a movie based on murder. If only William Murdoch knew, how we thrive on movies and action thriller. :P The Station 4 constabulary is used as the location for the latest movie by Pendrick. Again the suggestion of an actress playing a cop causes hilariaty around - certianly days were hard then for women and hard still now. Towards the end Edison suggests Pendrick to join him to travel to US to establish a motion picture industry because he wanted to make the mark in Canada. Edison comments that he owns all the theatres and all patents on all moving picture technology in the United States. (historically not sure if it is true). As for Murdoch he muses "I'm not entirely sure I can envy a future where everyone wastes their lives staring at a screen watching made-up stories". Oh well, Murdoch we most certainly do that now. :P Episode 4: The character in the previous season who lived as Sherlock Holmes returns in this case. There are similarities in this case as that of Sherlock Holmes The Adventure of the Gloria Scott. In a conversation with a young boy, he brings up inconsistencies in one Holmes case - The Adventures of the Speckled Band Holmes deduces that a swamp adder killed the victim. But the boy comments that in his research he had not found and swamp adders in India. Interesting!

Episode 5: Amongst the conspiracy of Zombies, Aliens and Living Dead crated by Constable Crabtree, The Doctors - Ogden and Grace - use a sophisticated X-Ray machine for that time (something advanced than what Murdoch had created in the beginning episodes) in this case. Episode 7: Lochness Monster shows its face. Well, at least Inspector Brackenreid believes he saw one such while lazing on the beach escaping the heat. Snow Balls from Baltimore are introduced to the local folks. However they think they are seeing a descendent of a lake creature called Plesiosaur. In the end it turns out to be just a fabrication, man-made monster created to move in water using a rope. 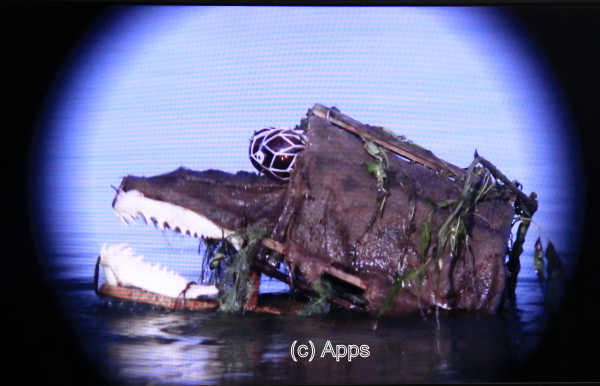 And accidentally Crabtree invents a Frisbee although he calls it "Flying Hat, or Flying Brim, Free Brim, Fris-brim or Flying Hat".

Episode 8: To identify what is written on a scrap of paper that has one-third of letters visible, Detective Murdoch devices a game similar to Scrabble. He explains thus "Each of these tiles represents a letter on the board. And the number in the corner represents their position from the left side. You'll be much more productive if you proceed methodically, and you'll soon see which sequences have the potential to make actual words." - which exactly how the game is played. Although Crabtree calls it as Scramble. And Murdoch meets Guglielmo Marconi - the wireless telegrapher - who is trying to set up a receiving station to send a signal across the Atlantic from Canada to England.

Episode 10: The case in this episode is about the murder of the founder of a singing group called Canadian Jubilee Singers.  They are based on the real Canadian Jubilee Singers who were performing spiritual songs across Europe and North America from 1870s into the early 1900s. The case also deals with the hatred towards African American folk, ragtime singers and Speakeasy.

Episode 11: The case involved a robbery using a machine that drills a huge hole into the ground. Murdoch surmises that the thief built a machine that is based on Helical Rotation and he also draws a sketch of it as part of his investigation. Doctors - Ogden and Grace - attend a lecture by Elva Gordon, an archaeologist and an explorer who recently returned from spelunks (deep-cave explorer) of the Yucatan who also finds a race of beings living underground. It also is shown that painting nails with red color or cutting hair short is scandalous but fashion is progressing. So does the rage for hot dogs start, apparently a man from Coney Island was selling in Toronto. 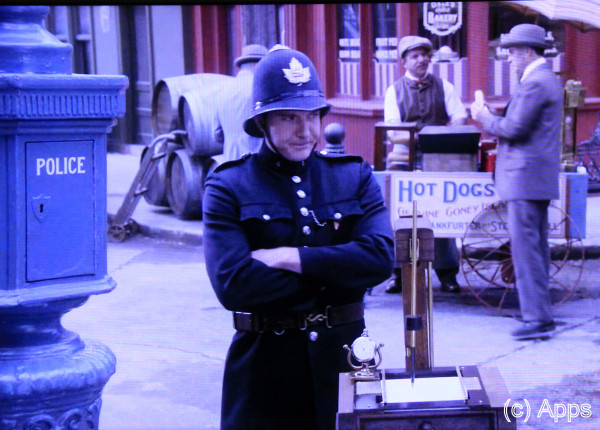 Crabtree also believes strongly in The Hollow Earth theory. Murdoch also uses a tool to pick up the soil samples and identify the path the digging machine went. 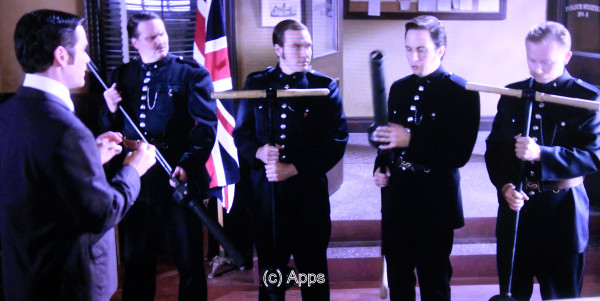 It also seems that there was no explanation yet discovered as to what causes earthquakes, however Murdoch creates a seismograph (based on John Milne's invention) in his laboratory to figure out from where the thief was digging. Electroplating with diamonds also seem to be a new invention. 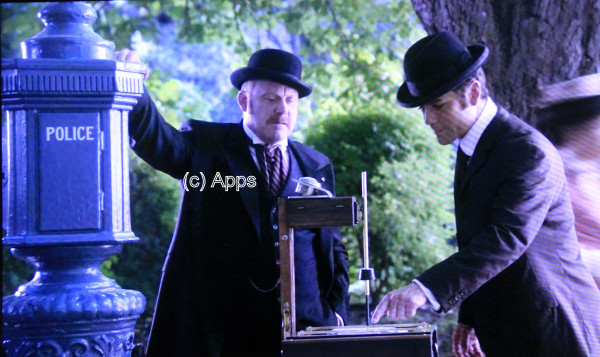 Episode 12: The case is so close to the plot of the movie Strangers on a Train, although the book and novel came some 50 years after supposedly this episode was made in.

Episode 14: The Toronto Constabulary engage in a Curler match with another team. The game seemed very interesting. Murdoch creates skating kind of shoes to help team win the game.

Episode 15: The case revolves around the attempted assassination of US President William McKinley, espionage, spies from both countries (US and Canada) and ofcourse the murders. Constable Crabtree flaunts around his genuine Regis Skyline n°7, the finest ink pen in all of Europe - considered expensive - through the episode.

Episode 16: The Constabulary dine at a new Chinese restaurant, eating food with Chopsticks (Inspector Brackenreid comments "Chopsticks? What can you chop with these?"). However the case deals with Boxer Rebellion (Boxer Uprising or Yihequan Movement was a violent anti-foreign and anti-Christian uprising which took place in China towards the end of the Qing dynasty between 1899 and 1901.  More here.). Crabtree gets to deal with Ninjas and dies a bit of Kung Fu as well.

Episode 17: Motor Cars are shown to occupy the roads along with horse carriages in this episode. The case again deals with sound-activated bomb tied to a factory owner and Murdoch races to defuse it. Murdoch and Dr. Ogden work on profiling the culprit - a new concept for the constabulary.

Episode 18: The case involves with genius club - a fraternity called Mimico Newsomes, an exclusive puzzle fraternity. They are trying to solve a puzzle created by Edgar Allan Poe many years ago.