Continuing with the critiques I started in 2015, here is the next in series – a book review.
Prologue: Go here.
For Review of all books in this series: Go here.
Stars: 4 / 5
Recommendation: For the conclusion a definite pick since there are unexpected twists.

The Enchantress - final episode in the series - was published in 2012. Since Josh Newman - The Golden Twin - got his own book in The Necromancer, it was befitting that Scott dedicate this book to Sophie Newman - The Silver Twin. The story takes places in two different time strands - One in Danu Talis, ten thousand years ago and the other in San Francisco, the present time. Naturally there would be characters repeated in both periods of time since some existed from the beginning. So you can see the confusion it would create in my brain. However I was very curious on how the story would end and was really curious to know who actually Marethyu was. Why him, cause every other character so far revealed had a past face and present face except for him. Oh well, here's my take on the final installment. 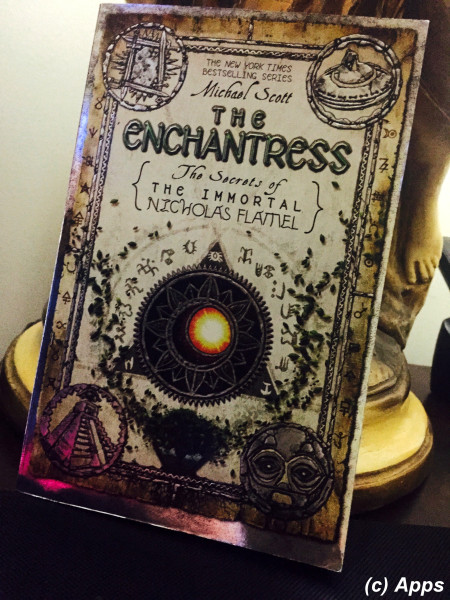 Josh and Sophie Newman get reunited in the previous book, The Warlock, and go back to Danu Talis along with John Dee and Virginia Dare, to the same thread in time where the others have gone to (Scathach, Joan of Arc, Saint Germain, Palamades, William Shakespeare and of course Marethyu).

In the present: Nicholas "Nick" and Perenelle "Perry" Flamel, Niten, Prometheus, Mars, Hel and Odin fight the monsters that John Dee had unleashed onto San Francisco. They are joined by Machiavelli and Billy The Kid, The Morrigan, Black Hawk and Tsagaglalal in her youthful immortal form.

On the Danu Talis, ten thousand years ago:  Scathach, Joan of Arc, Saint-Germain, Palamedes and Shakespeare escape out of the prison with the help of the young Prometheus. They fight the final battle along-side the Twins. Surprisingly Dee and Dare also join them.

So what made Dee and Dare change? What is the meaning of the prophecy? Who are in-real the parents of Josh and Sophie? What is the destiny of Josh that makes him the Necromancer and of Sophie that makes her the Enchantress? Will Danu Talis fall again as destined so the plan of Earthlords wont be successful? To know that and more interesting twists go ahead and read the conclusion. I am sure you will love it as much as I loved it too. My favorite characters all thru were Marethyu and Abraham. It was very surprising to see who Marethyu in reality was and what became of Abraham.

Of course if you have been reading the book closely you would have guessed who Marethyu was in the third book The Sroceress when Scathach and Joan of Arc are trapped in a shadow-realm created by Marethyu. Well, not want to add any more spolier alerts. Enjoy the read!!
Tags: books, critique by amateur, reviews, secrets of nick flamel
Subscribe