Continuing with the critiques I started in 2015, here is the next in series – a book review.
Prologue: Go here.
For Review of all books in this series: Go here.
Stars: 3.5 / 5
Recommendation: As the series is moving forward a myriad number of characters are introduced. A bit of confusion in the beginning for me but I picked it up along. If you are not like me who gets easily confused, then definitely to pick this up to read what happens next.

This is the third book in the series by Michael Scott published in 2009. The title of the book, Sorceress, refers to Perenelle "Perry" Flamel. Although the plot revolves around Perry, it also follows the Twins - Sophie Newman and Josh Newman - and Dee. 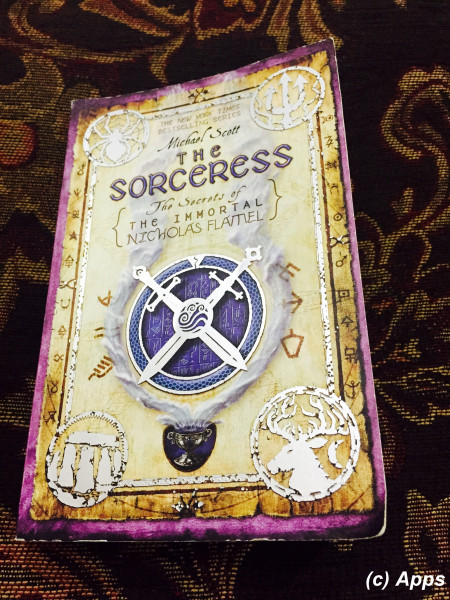 In the last book, the Twins and Nicholas "Nick" Flamel travel to London escaping Dee and Niccolò Machiavelli (an Italian Renaissance historian, politician, diplomat, philosopher and often called as the founder of modern political science). Nick and Perry are running out of time, they are aging by the hour and without the recipe from the Codex - Book Of Abraham - they would die soon. And he feared for the Twins and the whole humanity in general. Perry, after defeating The Crow Goddess (one form of her called Morrigan, but her two sisters Macha and Badb take over the body of Morrigan), forms an uneasy alliance with the now Crow Goddess and Areop-Enap, the Spider Elder. But still is in Alcatraz waiting for a chance to escape, though she finds that Dee has filled the island's cells with terrible monsters.

In this leg of their journey, as they (the Twins, Nick and Perry) try to find a way back to San Francisco, they encounter more immortal, Elder and Next Generations along with learning to control their newly acquired powers. Some of the beings they come across whom they had to fight with are  - Genii Cucullati (The Hooded Ones or The Flesh Eaters), the Nereids (sea nymphs), their father Nereus (also known as The Old Man of the Sea), Cucubuths (offsprings of a vampire and Torc Madra - blood drinkers), Dearg Due (another kind of blood drinking vampires), Billy the Kid (an American Old West gunfighter), Cernunnos (an Archon - the Horned God) and his pack of wolves called the Wild Hunt.

Some of the beings they come across who aid them are - Palamades (a Saracen pagan and a Knight of the Round Table in the Arthurian legend), William Shakespeare (who apparently was at one time an apprentice to Dee and became immortal but now fought against Dee), Gabriel Hounds (also known as Torc Madra), Gilgamesh the King (demigod of super human strength), the Ghost de Ayala, Scatthach, Joan of Arc and her husband Francis.

What awaits them in this journey? How do they survive? Will Perry escape Alcatraz? Will Josh overcome his jealousness? Well, that and more will be answered thru the tale. Only drawback I see of the book is too many new characters introduced, too many twists that sometimes are loose without an end. Perhaps they all get tied up in the next set of three books. However, it created quite a confusion for me for a while even though it was exciting.
Tags: books, critique by amateur, reviews, secrets of nick flamel
Subscribe