Stars: 4.5 / 5
My Recommendation: Absolutely for kids ages 10+ and above and adults who want to visit the fairy-tale land. ;)

The second book in the series of The Land Of Stories book was published in 2013. Chris Colfer takes us through the fairy-tale land again but this time there is a sinister evil that would seem to be undefeatable. 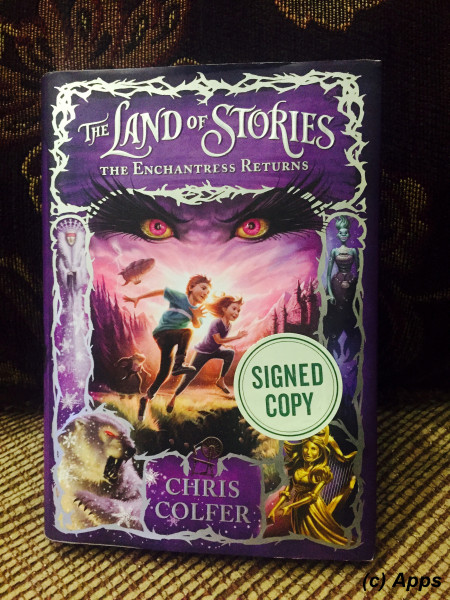 "My most scientific analysis, with all means of science and technology in mind, is that it's magic" - quoted Conner, one of Alex's earlier comments. Indeed it was magic in those lands there - some good, some evil. In this book as well, Alex and Conner Bailey - the twins - set on another magical adventure. However, this time they travel to get their mother back as well as fight to save both the worlds.

On the day when Bob, the doctor that Charlotte had been dating since a year or so, Charlotte goes missing. Fairy Godmother - The twins' grandmother - puts them on house arrest with Mother Goose and Xanthus - fire fairy - to watch over. Twins come to know that The Enchantress has kidnapped their mother from this world and taken her to the fairy-tale land. Why would someone kidnap their mother? How could someone other than few select fairies from fairy-tale land come into this world? To figure out the reasons behind, the Twins once again enter the fair-tale world.

They seek help of Froggy (aka Prince Charles Charming), Red Riding Hood aka Red, Goldilocks and Jack (famous for the Beanstalk and Giant). They learn that The Enchantress "Ezmia" is the evil witch who covets to gain both the worlds, but first she need to conquer this world. Ezmia has been systematically destroying each of the kingdoms in the Fairy-Tale Land thus trying to get the kings and queens to submit to her. Where does the role of Charlotte falls was still a huge question for the Twins. But, first they have to find out how to defeat Ezmia so their mother can be rescued. They look into the book "Myths, Legends and Collecting Spells" for a clue and find The Wand of Wonderment - the book mentions that whoever holds it will become invincible. They determine that it means that it can be used to stop Ezmia.

However to make The Wand of Wonderment one would need the six most prized possessions of the six most hated people in the world (aka the fairy-tale land). The little entourage of 6 people set out on this journey to acquire the different articles needed for the Wand. In the process they come across other fairy-tale characters and learn some hidden truths and some exposed lies. Will the journey give them what they want, free their mother and save both worlds? Well, read for yourself and see what happens next.

You will be surprised to know who really is Rumpelstiltskin, what was Snow Queen (from Snow White and Seven Dwarves) upto now, why has wicked stepmother behaved so badly towards Cinderella, how do Belle (of Beauty and the Beast) and the Beast relate to Sleeping Beauty, why is the Enchantress making all those spinning wheels, what made Enchantress so evil, who really is the singing harp that Jack found long ago in the Giant's castle up the Beanstalk and above all what is the most prized possession of Ezmia that will eventually cause her downfall. Oh not to forget the fate of Alex and Conner towards the end of the story - an interesting twist.

Just like any adventure, this book also comes with a few bumps. A whole chapter of Alex dreaming and trying to figure out the answer could have been removed. At times Conner is really side-lined by Alex. Would have been nice to give Conner the credit he is due for. Red really comes across obnoxious - perhaps the future books may tame her well - but it was getting under my nerves to read her character. Also there are three characters that Ezmia speaks of - Baker, Locksmith and Soldier - wonder which fairy-tales characters they would be related to. It would have been nice to see a connection on them too - perhaps the future books will shed light.

That said, another good book to pick up and enjoy the ride with Alex and Conner.
Tags: books, critique by amateur, land of stories, reviews
Subscribe