Published in 2008, this work by Nicholas Sparks was filmed in 2012 as well. As far as I know and those that I have read, this is the only book in which Sparks portrays fate and destiny. However, it's not like other fantasy novels where fate and destiny is inter-twined with magic or mystery, but stays much much closer to reality. However, one wonders if some magic is involved. :) 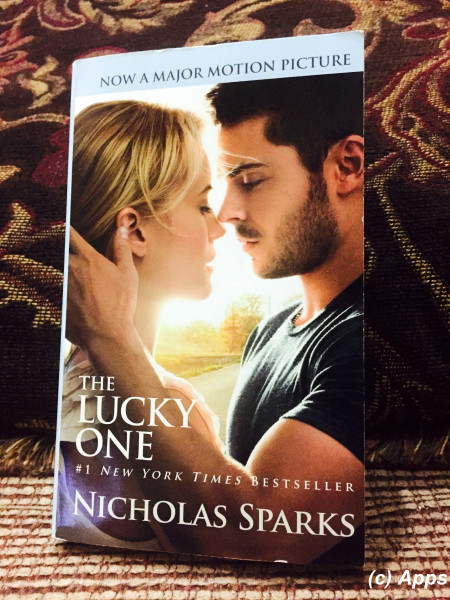 The story is about Logan Thibault, a U. S. Marine who walks across the United States in search of the girl in a photograph that he found in his tenure in Iraq. A photo that turns into a lucky charm for him, even saves him from death more than once. A conversation with his friend, Victor, puts him into this journey - search for the girl. Beginning at Colorado, accompanied by his dog Zeus, he eventually reaches North Carolina where he meets the girl from the picture.

Elizabeth "Beth" Green, divorced and with a son Ben, lives with her grandmother and running a dog kennel. Her ex-husband, Deputy Keith Clayton, has not been the best husband or father, and even after divorced interfered with their lives. Logan runs into Clayton in the outskirts of Hampton where he catches Clayton being particularly uncivilized with a few girls lounging there. The run-in does not leave a good taste in Clayton's mouth and he continues to confront Logan.

Logan is fighting his daemons, and so is Beth. Yet they fall for each other. However, Logan is holding back the actual reason he was staying in Hampton while Clayton figures it out and begins to use it against him to turn Beth's feelings. In all this mix, is the budding relationship between Logan and Ben. What follows is how Logan fights his daemons, how Beth commits to her heart, how Ben bonds to Logan and how they all stand together against Clayton.

Simple human emotions, complex relationships and emotional feelings twine through the plot making it another of Sparks romantic touch. Oh, I always cry buckets when I read his novels. But in this particular one I not only cried, but also felt one with the characters. I haven't seen the movie yet, but I am sure the movie has been a pleasure to watch as well. The book I have is the re-print of the original when the movie was made.

However, I do wish Sparks goes beyond North Carolina in his books. All his books end in North Carolina and always one of the key character dies in the end. That routine in the plot is perhaps is his success since 11 of his 19 books have been made to movies, successful ones even. Yet, I do wish if he could expand a bit more. That said, like any Sparks novel, this is another charming one to be picked and read. Go for it!!