Continuing with the critiques I started in 2015, here is the next in series – a book review.
Prologue: Go here.
For the review of Book I, go here.

The second and final book of The Majat Code series (at least I am thinking it is final), titled The Guild Of Assassins was also published in 2014. I liked the conclusion well, although expected it a bit. Another adventure into the fantasy world of The Guild and the lives of Aghat Mai and Aghat Kara indeed. 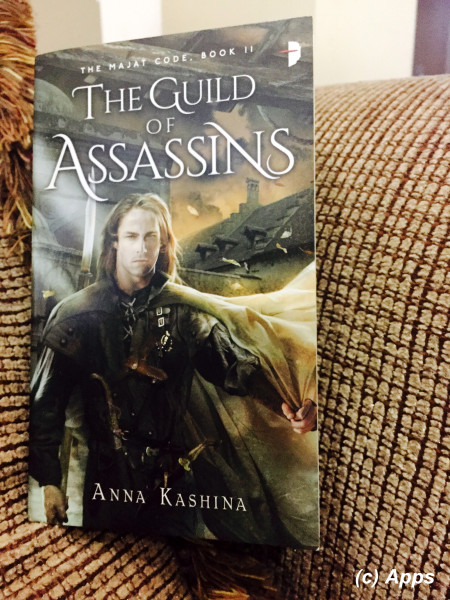 This book follows more on the fate of Aghat Mai and The Guild rather than about the empire and the King who is defending it against the Kaddim armies. Kara, a Diamond Majat, achieved freedom from the Guild. However in getting her freedom, Aghat Mai had committed a crime that is punishable according to The Guild. So he heads back to The Guild to face the music, so to speak. He comes with a high reputation that he had earned at a very young age with two blows named after his rune, Viper - Viper's Sting to kill the opponent and Viper's Kiss to save the opponent but have the onlookers to think it was deadly. His precision in technique and his strategy adds only to the power he wears as a cloak.

He returns to The Guild, but not alone. He is accompanies by Prince Kyth, Aghat Kara, Keeper Egey Bashi, Truth Seeker Ella and Mother Keeper. Although everyone arrives at The Guild in different paths, they still form a unit in defending Mai and Kara for the valuable services they have provided to the empire as well as their powers that can be used successfully against the Kaddim armies. The journey also reveals a lot of truth in the feelings within Kyth, Kara and Mai. Who truly loves whom and what the battle means in the end. Kara is confused about her pull towards Mai and her love or loyalty towards Kyth. Kyth is stubborn as hell that his infatuation is love and fails in many cases to see how that causes trouble to Kara. Mai restrains his feelings the betterment of The Guild. Yet they all unite to save the Empire and the Guild.

With ruthless politics, hidden agendas, killer strategies, forgotten code, mystery armies and confused hearts - all form the thread that weaves through the characters making it a complete plot.

As I mentioned in my previous review of Part I, the flaws still hold good here too. However one more point I want to add is the childish nature of Prince Kyth. He seems to forget at times that he is the Crown Prince and instead behaves like a 14 year old on hormone high. Although it was a good characterization in book 1, he doesn’t seem to have matured much until towards the end in book 2. Using Kara and her mis-guided feelings like a toy was not something I wanted to continue to see in book 2 as well. Although at the end he realizes and changes, but it would have been much better of the change had been shown early-on. This could have reduced the volume of the book further more.

All in all, another good book to pick up for those lazy days.

Stars: 3.5 / 5
Recommendation: To know the fate of Aghat Mai and The Guild, to travel through their world again, definitely pick it up.
Tags: books, critique by amateur, majat code, reviews
Subscribe