This is the first book the series written by Anna Kashina and published in 2014. I hadnt read any of her books before but something about this wanted me to try. Going in blindfolded, I can say I did love the theme,  plot, characters and the way the story flowed through.  A fantasy series that could potentially become an epic if tailored well and characters expanded more. 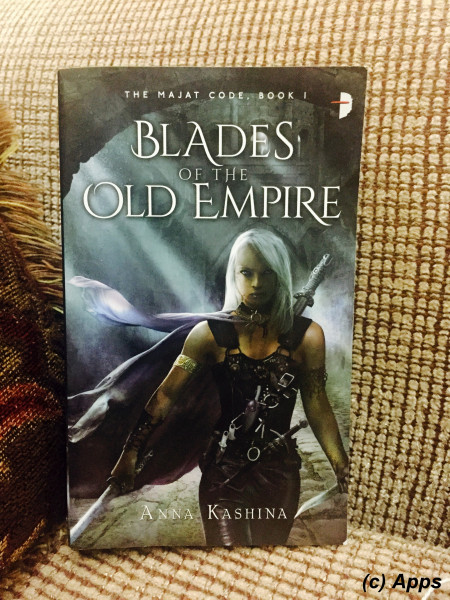 Prince Kythar Dorn - Kyth - has a secret gift, mastering the wind to his will, that if exposed would be the end of their legacy and rule. Yet he thrives to master it. Aghat Kara, a Diamond warrior of the Majat Guild, was serviced to protect Prince Kyth for a certain period of time. However when the tenure ends, Prince Kythar wants to retain her services but need to negotiate with her Guild. In the meantime they are attacked by Kaddim Tolos and his men to capture the Prince, whom they defeat despite the Orben weapons and the "power to defeat" possessed by Kaddim Tolos and his men. Mother Keeper, Magister Egey Bashi and King Evan have reason to feel panicked, not because there was an attempt to kidnap the heir but the ancient brotherhood of Kaddim has risen. They will stop at nothing to overpower this regime as they had done the Old Empire. For Kara, it’s a conflict between duty and honor but also love, a love that she fails to realize, or acknowledge.

A parallel story about Ella, the truth seeker, runs along where she has a fascination for Aghat Mai - the leader of King's Majat Pentade who protect the King. Will she seek the truth or love in the end? A journey that we also follow and root for her in whatever path she seeks. The story continues with similar plots that one must have seen in other books - of betrayal, of conquest, of love, of honor, of duty and facing consequences based on what you choose. However this is a well-woven plot that closes into a beautiful picture at the end. Needless to say there is a sequel to it to get a closure on the fate of Aghat Kara and the entire Majat Guild.

A few points to quote the negative sides of the book. First, the volume of the book - A few chapters and some repetitive descriptions could have shortened to make it a little more cohesive. Second, the romance portion - this book was put in the romance / mystery section in the book store. It should have been placed in the Fiction or Fantasy section instead to get its right audience. Third, character weaknesses are so misplaced in few occasions. If they could have been tweaked it would be a much better course. Fourth, scenic descriptions - A few times I felt that we were moving through the same lands and roads although the story says it otherwise. That disconnect definitely could have been corrected.

All in all a good book to pick up and not regret.

Stars: 3.5 / 5
Recommendation: Don’t think it's another one of those books with warriors, ninjas, princes, magic, love  and war. You will be surprised. Do pick it up next time you come across
Tags: books, critique by amateur, majat code, reviews
Subscribe