For the review on the first book, His Wicked Reputation, go here.

The second book in the Wicked Trilogy by Madeline Hunter is titled Tall, Dark and Wicked. Since I read the first one, I couldn’t resist myself to the read the next one to satisfy my curiosity. The trilogy follows with the story of Lord Ywain Hemingford - Ives - second and youngest legitimate son of the late Duke of Aylesbury. 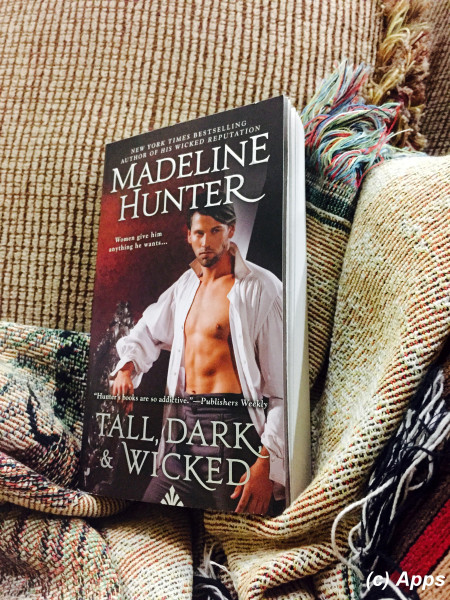 He is a well-known barrister who fights on Her Majesty's side and more than often trying to keep his older brother, Lance - current Duke of Aylesbury, out of trouble. "Loyal, Good-humored, Intelligent, Uninhibited, Passionate and Accommodating" - just as he was pondering on the six qualities he jotted down that he would like to see in his mistress, gets interrupted by a curious case brought to him by one Padua Belvoir. She appeals to him to defend her estranged father who she believes is wrongly accused of a crime and also refuses to have someone defend him. Unfortunately for Padua, Ives had already been assigned to this case but as a prosecutor. However, he does insist on helping her in any way he could except the way she wants.

What follows is the cat and mouse chase between the culprits and the law in trying to prove Padua's father's innocence, between Ives and Padua in exploring the sparks that ignited during their first meet, between Her Majesty's laws and Ives personal ethics, between the accidental involvement of her father in a brothel place and it being just a false front for something bigger. In all this, Ives realizes Padua is everything he want in as his mistress fulfilling all the six qualities he had written down, but does he still want her as his mistress or more. What is he secret Padua's father is holding or whoever is holding on him that is making him to refuse any help. Is all this linked to whoever killed Percy, Ives oldest brother. Does it lead to the confirmation or dis-abandonment of the rumor.

Read through the book to know more. I guarantee it would be a fun ride with lots of interesting avenues explored. **Wicked Grin**

Stars: 3.5 / 5
My Recommendation: If you are interested in romance novels and set in periods / eras, then this is definitely the book to go to.
Tags: books, critique by amateur, reviews, wicked trilogy
Subscribe