Continuing with the critiques I started in 2015, here is the next in series – a book review.
Prologue: Go here.
For the review of all book in the Guild Hunter series: Go here.

Stars: 3.5 / 5
Recommendation: Definitely a pick if you like fantasy fiction involving vampires, angels and humans.

Archangel's Shadows is the 7th book in the Guild Hunter Series by Nalini Singh, a New Zealand author of Indian descent. I have never read any of her books prior to this one. Last year at the  Romance Writer's Association Annual Meeting in NYC, I got an opportunity to meet her. She was very pleasant to meet with, all decked in ravishing red. :) And I acquired this signed book that day. Since I had it, I ended up reading it. 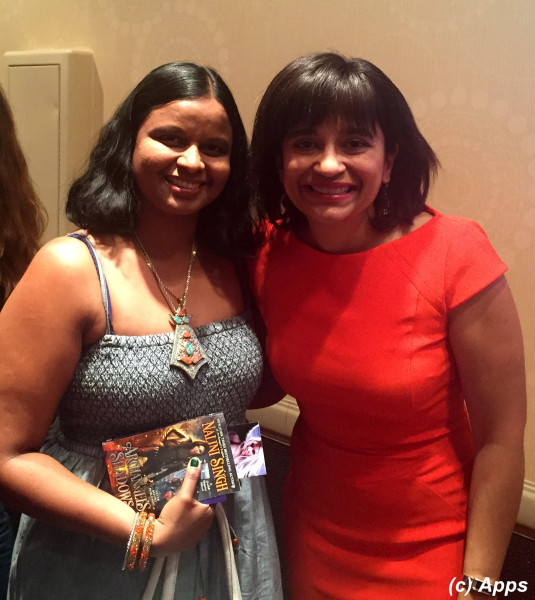 At first I thought, Oh great! Another novel on vampires and demons. But I put on a positive thought  and continued to read. The series is written in a world which was ruled by archangels, commanding both mortals and immortals alike. Guild Hunters are the soldiers caught in between immortals and mortals, protecting both from rogue vampires, archangels and even humans.  Ashwini Taj, Ash, the mortal Guild Hunter pairs up with Javier, a two-hundred and forty seven year old vampire in this book. 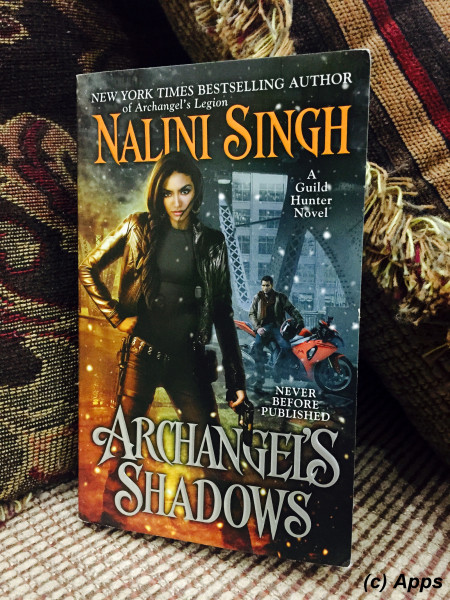 A battle between archangels had occurred and New York had barely survived it. Now the city was recovering as well Ash who got sliced up in the battle. She gets assigned to a case of missing animals in Vampire Quarters along with Javier. What seemed to be a simple case of animals missing or being desiccated turns out to be otherwise when they get tasked by an Angel, Illium (aka Bluebell), of a vampire misusing his cattle - meaning his human blood donors living with him. Initially they accept to look into it assuming it to be a disgruntled donor complaining against the vampire but when Janvier's friend , Felicity, goes missing as well. Ash and Javier move into the deeper world of Vampire Quarter to ferret out the killer bringing justice to Felicity and other human donors. In the meanwhile they fight the attraction they have towards each other, something that is not possible to explore on considering one of them is an immortal. And there are secrets they hold dear to their heart as well that when revealed may cause unbearable consequences.

A parallel plot proceeds along where the Archangel Raphael, his consort Elena and his second in command Dmitri deal with the archangelic politics, helping the people of New York city deal with the aftermath of the battle and working towards bringing the remaining archangels under one roof in unity.

Will the Archangels unite under Raphael, for not at least? Will Ash and Javier bring justice to Felicity? What are the secrets they hold that might cause unbearable consequences? Will they be able to surpass it and find the love they have been fighting for so long? Will the Archangel Raphael and Dmitri succeed in calming the battered city? Well, read the book to find the answers.  A plot with several twists but easy to follow even if you havent read the series from the beginning. Adding this book to my library and marked for future to pick the series from the beginning, and perhaps other books by Nalini Singh. Enjoy the read!!
Tags: books, critique by amateur, guild hunter, reviews
Subscribe