Continuing with the critiques I started in 2015, here is the next in series – a book review.
Prologue: Go here.
For books in this series: Go here. 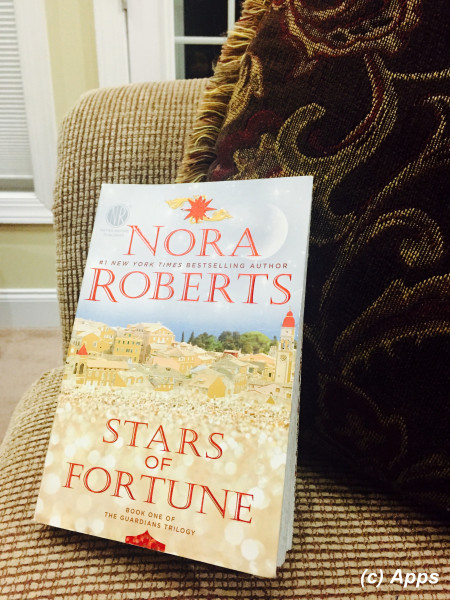 This was the first book in The Guardians Trilogy by Nora Roberts published in 2015. I met her in-person last year when she came to the Romance Writers of America’s Annual Conference in New York City. It was such a pleasure to see her as she is one of my favorite authors. Her books have powerful plots, strong characters and unexpected twists that keep you on the edge. She always had a flair with her words, some of them stuck to my brain and were very memorable. However in past few years there has been a shift in the way she presents her stories, perhaps around the time The Bride Quartet books that were published in 2009.

Less powerful plots, not very strong characters, simple language sometimes coming closer to an amateur writer’s words, and seldom see any unexpected twists with more than often one can guess what the ending is before one finishes the book. It was disheartening to see the change. Well not all books she write since 2009 were seem changed, but quite a few I felt so. Of course, I only read her books that are published under Nora Roberts, so cant speak for the books published under J. D. Robb. Wonder why she made the change, but I always hoped she would come back with a book in the old way. Finally this book seems to be proving that my wait is over. I simply loved it.

Three goddesses of moon create three stars, one of fire, one of ice and one of water to celebrate the rise of their new queen. To keep them from the evil goddess, they place them in the sky. But they fall down to unknown places, putting the world in danger. Now six people – three women and three men – have to band together, earn trust, experience love, find the stars and fight the evil goddess. They are the Seer – Sasha; the Sorcerer – Bran, the Werewolf – Riley, the immortal – Doyle, the Time and Space Traveler – Sawyer and the Mermaid – Annika.

In the first book we get to meet all the six, at the same time get to see the lives of Sasha Riggs and Bran Killian. An artist, an excellent one, by profession, Sasha’s vision take her to the Greek Island of Corfu. Where she meets with the rest of the crew along with her Bran. The six learn to band together, trust each other and at the same time search for the first star – The Fire Star. There are secrets they keep in the beginning, for good, but they overcome that hurdle to bond and form a unity. The journey then follows about how they find the star, fight the goddess and come out in flying colors, literally.

An excellent light read, with the old way of her writing. However, it does remind me of two other series that Nora Roberts had written in the past – Stars of Mithra and The Circle Trilogy. Almost like a combination of both became this series. Have to wait and read the remaining two how they pan out and if my hunch indeed becomes right!!
Tags: books, critique by amateur, guardians trilogy, reviews
Subscribe