Stars: 4/5
My Recommendation: Must pick if you are an avid fan of historical fiction.

Have you ever picked a book just because you like the lead character’s name? Well, I did just that when I picked this book titled Three Emperors by William Dietrich. Knowing that it is 7th book in the series, I still wanted to read it just because the lead character is called as Ethan. I love Ethan Hunt character from Mission Impossible series because of his adventures and also because it’s played by Tom Cruise. Ergo I picked Ethan Gage’s historical adventure in The Three Emperors. Call it karma or coincidence, if Ethan Hunt was born in the Napoleon era he probably would have been Ethan Gage. If the fictional world was real, then perhaps Ethan Gage would be an ancestor for Ethan Hunt. I am not kidding, these two characters remind me of each other so much. Similar kind of adventures, similar kind of rogue missions, similar way of being in the middle of a crisis every time – its so surreal that I forgot for a second there that I was comparing a fictional book character with a fictional film character. No need to mention that I thoroughly enjoyed the book. 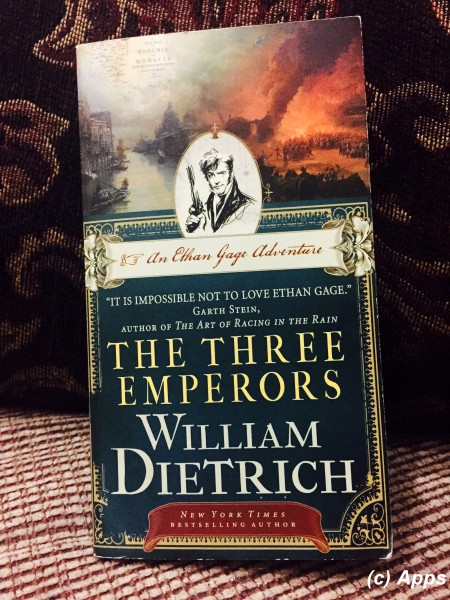 The story starts after the naval battle of Trafalgar from which Ethan Gage – an American adventurer, his Egyptian wife Astiza and son Harry escape. However, they get separated. Astiza along with her son Harry, travels one path to Prague in search of legendry Brazen Head as well as her husband Ethan. In the process she comes across Primus Fulcanelli, a Latin scholar, who turns out to be more than a bishop. Her journey with Primus lands her into Golden Lane and into hands of a dangerous alchemist Auric. Betrayed by Primus, she trades alchemy for the safety of herself and her child waiting for her husband to reach her and in the process escape the clutches of the cruel Auric and vengeful Primus.

In the meanwhile Ethan is traveling another path, trying to steer clear of the Three Emperors – Austrians, Russians and French so he doesn’t get used as bait or ally, playing ping pong with him as needed. He also needs to escape the spiteful Catherine Marceau and her general Pasques, spies who are bent upon finding him and killing him. Faking his death he lands into a Jewish Napoleonic solder Gideon Dray and his father Aaron, who help him reach Astiza. The rest of the story unfolds in the searching for clues in Durendal – Sword of Roland, reunion with Astiza and Harry, escape all the emperors and spies and finally find the Brazen Head – a truth machine.

A true adventure that takes you through the pages of history simultaneously making you wonder if you are really there. The entire book kept me on edge, not wanting to put down the book. An enjoyable read and a must for anyone who is interested in historical fictions.
Tags: books, critique by amateur, reviews
Subscribe