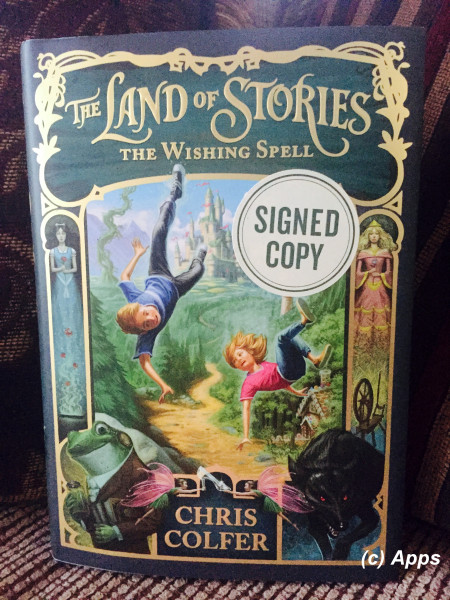 I came across this series of the books, The Land Of Stories, during Thanksgiving Sale, which were signed by the author too. I had not heard of this author but the book title and the cover intrigued me enough to by the entire series. Written by Chris Colfer, The Wishing Spell is the first book of the four part series. Later on a little google search pointed me to a 25 year old young man, famed for his role as Kurt Hummel on the television series Glee, who wrote these children’s books too. A talented one at such a young age. I hope we get to see more works from him, on page and on screen, both. Here is my take on the first book in the series.

Just like the name says, it’s a story in Land of Stories, where all the fairy tales come true. I always wondered what happened when a pauper Cinderella married Prince Charming, if her life as Queen was happily ever after or if it was hard; what made Evil Queen so evil; How did Rapunzel survive being outside the tower; did Goldilocks escape the bears hurting them or killing them or unscathed? Many a times I wondered on the “after” part of Happily Ever After in these fairy tales that we grew up with. I am pleased to see that Chris Colfer has taken that next step by coming up with his version of what happens “after”. But first who opened the door to this Land? – The Twins Alex (girl) and Conner (boy) Bailey.

They live in a rental home with their mother after their father had passed away and they had to go thru a series of hardships. Their mother tries to make ends meet but it comes with a cost of her working all the time. The only time they look forward to was the time they spent with their grandmother who would spin amazing tales for her fairy-tale book and also cook delicious meals. For their twelfth birthday, their grandma gifts them her treasured fairy-tale book, the same one she always read from.

That’s when the life of Alex and Conner turned upside down, literally dropping them into the book and into the world of Land of Stories. Albeit accidentally they have fallen, they have to return back to their world. With the help of a frog man, Froggy, they learn about the Wishing Spell that requires eight items to be collected and used together for the Spell to be activated – Cinderella’s Glass Slipper, Saber from deepest Sea, Bark from Red Riding Hood’s Basket, Stony Crown from Savage Lair, Spindle from Sleeping Beauty’s Spinning Wheel, A Lock from Rapunzel’s hair, Jewels from Snow White’s Coffin and finally Tear Drops from a Fairy.

To acquire these the twins take on an extra-ordinary journey through the different kingdoms in the Land of Stories, escaping hurdles and mishaps. In the process they come to see the “after” part of several fairy-tale characters that they grew up reading so much about – Queen Cinderella and King Chance Charming (Charming Kingdom), Queen Sleeping Beauty and King Chase Charming (Sleeping Kingdom), Queen Snow White and King Chandler Charming (Northern Kingdom) – all belonging to the Charming Dynasty but living in their own Kingdoms. Apart from these they come across Corner Kingdom ruled by Queen Rapunzel, Red Riding Hood has her own kingdom named after her, then the Mermaid Bay, Dwarf Forests and of course Fairy Kingdom amongst the other smaller kingdoms. They also get to meet Goldilocks who has her own share of troubles with law and Jack, the kid who climbed the Bean Stalk, now a man, and other well-known fairy-tale characters.

As their journey progresses, little do they know that the Evil Queen, is also on their trail looking for the same items, for she wants to use the Wishing Spell for her own reasons. The rest of the story unfolds on how the twins acquire the items, learning the lives of different people they meet along the way, help a few of them where needed, escape the Evil Queen’s attempts on capturing them and also learn the biggest secret of their family. Will they eventually get to use the Wishing Well spell? Will they reach home? What is the secret they learn? How does the lives of all these fairy-tale people intertwine with the twins?

Well, what are you waiting for? Pick up the book and read for yourself. I have thoroughly enjoyed the journey and loved every minute knowing the “after” part of Happily Ever After. I am sure you will enjoy too.
Tags: books, critique by amateur, land of stories, reviews
Subscribe