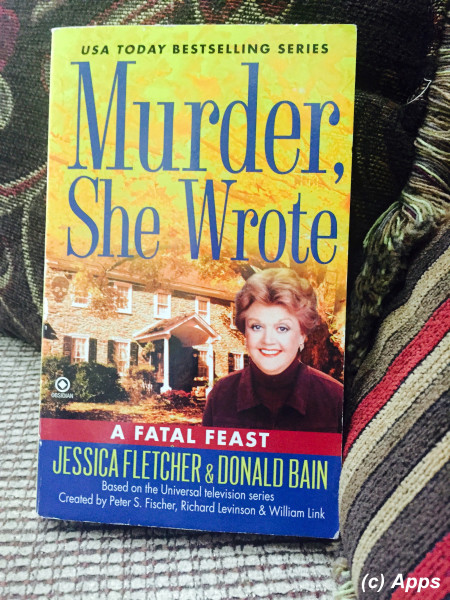 I have seen the TV Series Murder, She Wrote, all of the episodes, of course re-runs. However had never read any of the books that were written following the series. This is the first one I have read and here is my take on it.

Ghostwriter Donald Bain wrote these fictional novels based on Murder, She Wrote theme and also co-authored the fictional writer Jessica Fletcher in his books. This book titled “A Fatal Feast” was published in 2009. The story has the recurring character George Sutherland, Scotland Yard Inspector who has an eye of Jessica, coming to visit her in Cabot Cove. The mystery revolves around him, obviously, which Jessica helps solve it.

The story begins with Jessica working on getting ready for the upcoming Thanksgiving events at Cabot Cove as well as at her home and also to house her long-time friend George Sutherland who was coming to visit her for the first time. She wanted to give him a peaceful vacation in the midst of all the happy chaos around her – getting an accommodation for George for when he arrives, over-seeing the Thanksgiving pageant, preparing for the annual Thanksgiving Dinner at her home for which invitees keeps on getting increased and Dinner at Senior Center that provides food for homeless and needy on that day. With so much going on, she didn’t expect a murder to fall in her path, literally. And what does she do? Sleuthing and Solving – which she is best at – taking help from George at every chance she gets. The rest of the story is about how she solves the mystery, how her buzzing activities fare and above all how she entertains George and gives him a relaxed vacation as planned.

The book is fairly well written, plot keeps one on the edge and smoothly progressed. However, for me personally, I kept on going back to the TV series in my mind and comparing the book character with the ones portrayed in the series. Some mapped one-to-one but some left me confused. Added to that I was unable to imagine Cabot Cove as the same place depicted on TV on some occasions in the book. Because of these discrepancies it was a little tough to complete the book as easy as I would have wanted to. However, despite that it was a pleasant read.

If you ever come across a book on this series, I would recommend you to pick it up and read it. Very light as a fresh breeze, the book will finish before you know it and you will be left happy.