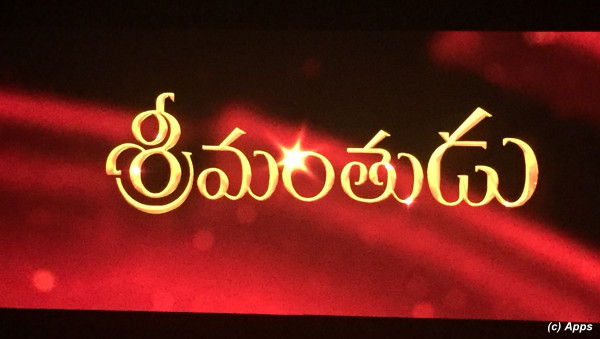 Srimanthudu ( = Wealthy Man) is the 2015 Telugu movie starring Mahesh Babu and Shruti Haasan. Film was directed by Koratala Siva and released on Aug 7th. It came with a bouquet of start such as Jagapathi Babu, Rajendra Prasad, Sukanya, Sithara, Tulasi, Mukesh Rishi, Sampath Raj and Subbaraju playing in the supporting roles. So, did this multi-starrer story become a hit? Has it been a crowd-pleaser?

Well, I can say the movie comes with a unique concept and some good music; definitely a different kind of role for Mahesh Babu too. However, you cannot ignore the flaws in it. Let me talk about the good first before I explore the flaws.

Harshavardhan (portrayed by Mahesh Babu), son of the billionaire Ravikanth (portrayed by Jagapathi Babu), is lost in his own world with a savior complex. He wants to help anyone in need and is a continuous mystery to his family. His world is rippled by Charuseela (portrayed by Shruti Haasan) who shares the same complex. The story then onwards unravels into deeper levels than just romance between the boy and girl at the end communicating a message.

Adopt-A-Highway is a concept in US (at least that’s where I saw first) where a corporation adopts a section if highway to keep it regularly cleaned; free-off litterand maintain it. Koratala Siva takes this concept a level up by embracing just not highway but a whole village with all its people and problems. Adopt-A-Village, what a wonderful idea. But, it can only work if you really have money to back you and power in you to kick ass every ill will that comes across your path.

That said, there are some noticeable quirks in the film that could be considered close to flaws. With a myriad of actors you expect them to talk. But, most of them didn’t have lines to speak or if they had it were just a line or two. Yet, they were perhaps picked for their expressions cause they were spot on. There definitely were lots of fights, considering the concept I am sure it is needed though.
Coming to the music, I was a bit surprised that this was given by Devi Sri Prasad (DSP). Not his typical stlye. Perhaps that’s why I liked only four of the six songs. Unfortunately the two duets between the two lead actors didn’t appeal to me well. Not only the music wasn’t harmonious, the lyrics sounded off and so was the taking of the song. Something was missing in these two songs. Yet, the remaining four were full-on DSP-style.

Sukanya and Jagapathi Babu who played as parents to the lead actor Mahesh Babu were paired years ago (23 years to be exact) in another film titled Peddarikam in 1992. When I saw them together again in this movie, I had hoped that some part of this movie would relate to that 1992 film. Alas, my hopes were crushed. :) Would have been a nice twist if the connection had been shown. But, that’s just my opinion. (I had posted three songs from this movie a while ago here)

Tradiitonally if you look a all Mahesh Babu movies, any movie that has three letters (in Telugu language) in its title had been a super-duper blockbuster. Rest of his movies were either average or in some cases disasters. This movie though with four letters in its name, is a nice family entertainer, a hit but definitely not a blockbuster that would break records. **Ducking my head from all Mahesh Babu fans** **Evil Grin**.  Worth watching once.

In the meanwhile enjoy this lovely melody Sung by Sagar and Suchitra. Lyrics were penned by Ramajogayya Sastry.