For review of all books under Ghostwalker series: Go here.

Stars: 3.5 / 5
Recommendation: A good one to have the continuity of the series involving mystery, eroticism, science and undefined.

Power Game is the thirteenth book in the Ghostwalker Series by Christine Feehan published in January of 20177. The central plot revolves around Ezekiel "Hunter" Fortunes - one of the three Fortunes brothers and a member of Team Four - and Bellisia "Bella" Adams - one of the orphan girls from Dr. Whitney's Group Four. 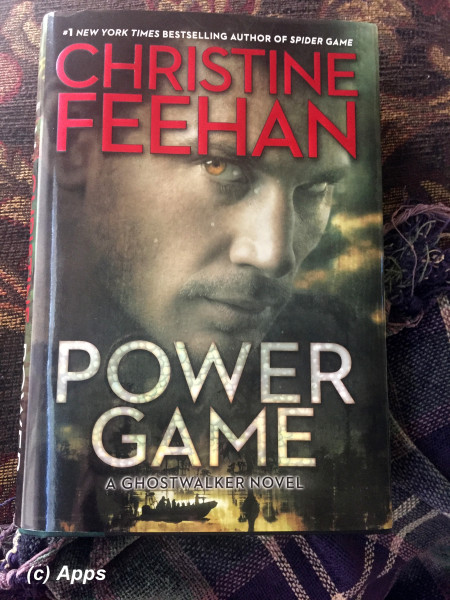 GhostWalkers are a group of women and men who are sent on special missions. They have enhances psychic and physical abilities along with genetic modifications, using in some cases not just human genes but all kinds of animal and plant genes. However every GhostWalker would need an "anchor" to draw back the psychic backlash, especially that would instigate violence. They are complex characters trying to live with their enhanced abilities and at the same time fight against the corrupt people around them, executing their missions successfully. There are a total of four teams of GhostWalkers Men serving in various areas of law enforcement and armed forces and four groups of Orphan Girls on whom Dr. Peter Whitney had experimented. He has paired each of his GhostWalker men with the women in the hopes to breed the next generation of GhostWalkers.

In Shadow Game we had seen that Dr. Lily Whitney-Miller, married to Captain Ryland "King" Miller - head of Team One - find the details of the Orphan Girls that Dr. Peter Whitney had experimented on along with Lily. Now adopted or held in a different lab or on their own or more girls added as years progressed, Lily and Ryland are determined to find those girls now women, rescue them and provide a safe haven. So far they have rescued Dahlia Le Blanc, Iris "Flame" Johnson, Briony "Bri" Jenkins, Marigold "Mari" Smith, Saber Wynter, Tansy Meadows, Rose Patterson, Azamie "Thorn" Yoshiie, La Poirve "Pepper" and Cayenne. The stories follow these men and women.

Christine seems to be continuing with the Team Four stories for now. What with the conspiracy of NASA emptying villages around Team Four's base and newer enemies keep popping up, one would expect her to continue with Team Four. However, more and more curious about Team Two and Three members since we only saw fewer plots for them. The story in this plot begins a few months after Spider Game, with most of the Team Four out on a mission and a few of them left behind to protect the women, children and Nonny.

On a mission sent out by Dr. Whitney, Bellisia "Bella" Adams finds that Team Four has been sold out to an internationally famed evil man. She comes to Louisiana bayous and the Team Four base to warn them. But instead she finds Ezekiel "Zeke" "Hunter" Fortunes instead. And he is the one sacrificed by the traitor. Bella takes upon herself to rescue him. But they have more bigger problems to fight against to just survive; one of them being their fierce attraction towards each other.

Bellisia’s smoothness is a perfect match for Ezekiel’s fluidity although to the core both are ghostwalkers. They not only match in their powers but also in emotions and love. Too good to be true for a reader but when you feel for what these ghostwalkers went through you would end up rooting for them to get this perfect match in their mate. Christine has finally showed the ghostwalker character with all their arrogance they are, true to their self, as opposed to softening them up.

Considering the tough and brash look that Ezekiel portrays, Christine made his plot much lighter than expected. She brought forth the softer side of the GhostWalker men, their humor and the love they have towards the women, children and Nonny. Some scenes did bring tears to my eyes, happy tears. Christine also gives more history about the remaining members of the team who were introduced new to us in the previous book Spider Game.

Christine goes in length to show us how the various divisions of military work together to go into hot zones all over the world, how they train for it, how they execute and complete their mission, how they handle wounded and rescued and how they come back. It probably is similar with any kind of armed forces for any country. However, just the thought of so many men and women out there protecting and serving, reading about it up close, garnered more respect and awe from me towards all those soldiers. Thank you Christine for bringing this to light.

Clearly we see that Dr. Whitney has more labs scattered across the world in this plot, some for his Breeding Program and some for creating his army of Super Soldiers. And more and more enemies are thrown at the GhostWalkers. I wonder how the end for Whitney would come.

As I mentioned in the review of Spider Game, Christine doesn’t exclusively tell that Trap Dawkins has Asperger's syndrome, but gives us all the symptoms in her scenes. However, she exclusively mentions about it in this plot.

While reading through the book, I thought the chapter 17 would be end of the plot. But Christine goes on to write three more chapters to it. First I wondered why extending the plot, but then once read I realized she sneaked in quite a few sub-plots in that three chapters alone. Smart!

And for the first time I have a favorite character from this team - Joe Sapgnola, the Team Leader. He has suddenly taken up a soft spot for me and I really want to see proper justice done to his character.

In every book we see that the orphan-girls are also super soldiers. However, Christine wraps it in the soft-nature of these girls masked with insecurity sometimes and stubbornness other times making them more human. Every plot we get more glimpses into the atrocities of Dr. Whitney on these girls when they were children and the same he does on the ghostwalkers as adults. It makes you wonder how safe your world has been and not so for so many. Makes you want to weep for these girls who haven’t known anything about childhood nor ever behaved as children.

Authors who write series like these always bring in the remaining characters in most plots to build a relationship between the characters as well as the readers. Similarly Christine brings in quite a few characters from past plots in the series reminding the reader about the other teams and other members of this team. However that tends to add repeat-paraphrasing and retelling of the old plots. Although it is lesser in this plot.

The title Power Game got me a preconceived opinion that either there would be a shift in power between Dr. Whitney and Violet or may be a new power will be introduced to the ghostwalkers abilities. It might be partially true but the plot didn’t pack as much punch as one with power would. It went smooth as silk with a few edges as these plots go but less of fire and more of embers. In a way it suited the characters though which I can totally be happy with. I believe the original title for this book had been Swamp Game as that was what Christine had announced earlier this year for this book. Swamp Game might have suited well in my opinion.

Another successful book from Christine. The series is becoming more and more intense with more players joining that Ghostwalkers have to fight against, with their surviving skills and the unimaginable twists in their powers and abilities. It would be interesting to follow each of the remaining Ghostwalker's lives and see how they eventually destroy the evil Dr. Peter Whitney.
( Collapse )
Collapse